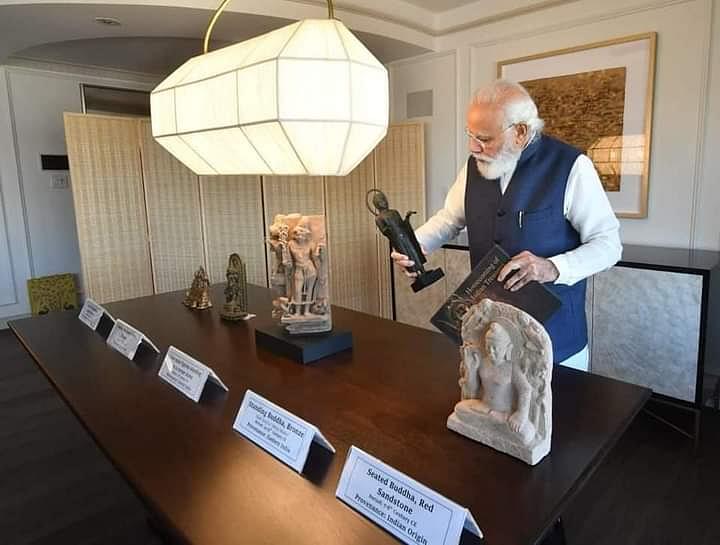 The United States government’s most recent restitution of 157 ancient Indian artefacts is a significant milestone given India’s past track record.

Since 2013, we at India Pride Project have worked tirelessly in the domain of restitution and have (over the past eight years) contributed to the majority of the 50+ successful restitutions made to India.

However, these restitutions are the proverbial tip of the iceberg. We believe that over 250 artefacts have been offered to India ( 200 were promised to PM Modi during his June 2016 visit to America of which only 11 came back) and ASI is currently in the process of authenticating them.

The current round of restitutions are a consequence of the tremendous work put in by the NYC District Attorney’s office, led by Colonel Matthew Bogdanos and assisted by the capable young Apsara Iyer, an Indian origin analyst/art expert. India owes a debt of gratitude to him and to the team of Homeland Security Investigators (HIS) of the Immigration and Customs Enforcement in America.

The returns made can broadly classified into the following streams.

One, from Operation Hidden Idol : Raids conducted by HSI on the notorious art smuggler, Subhash Kapoor’s ‘Art of Past’ gallery. Raids till 2012 on 14 storage locations in New York City alone yielded in seizures of 2,622 artefacts valued at over 108 Million USD – or over 850 crores – comprising looted artefacts majorly from India, Nepal, Sri Lanka, Afghanistan, Cambodia, Pakistan and Thailand.

We worked closely with Indian law enforcement and US HSI in bringing down his network by matching some of the iconic artefacts to theft sites in India, including the Vriddhachalam Ardhananri, the Sripuranthan Nataraja and the Uma. The same has been chronicled in my non-fiction commissioned book The Idol Thief.

Two, loot sourced through robber photos : Based on HSI’s investigations on Kapoor, we chanced on a vast trove of photos offered by robbers to the looters/smuggling network in India who would then send the same to the cabal of collecting lobbies that consists of dealers, collectors, and auction houses. We could match many such photos of artefacts and idols to actual theft sites in India. We discovered many were freshly looted from clandestine excavation sites. One such dealer who was caught using this modus operandi was the owner of the Wierner Galleries, she has been indicted and artefacts were confiscated from her gallery as well.

Three, loot that matched our archival database: A few museums and dealers were caught based on the use of our archival database consisting of old published material and our research on recent museum acquisitions along with the pattern matching them to fake provenance schemes. Some notable examples include -the Alingana Murthy from Ball State Museum which had a rare inscribed base which read “Deepambalpurathu sivigai nayagar” in Tamil; and the Chamunda from Orissa – Dakhina Candi temple which was a documented antiquity from Ian Donaldson’s seminal book.

Similarly, we discovered the iconic Nataraja from Punnainallur based on a tip we received from a confidential informant “SP” who provided us inputs—from an elderly priest—of a theft that happened in 1971 from the temple with the FIR closed as untraceable.

We worked with the local sources to dig out the temple asset register and old institutional photographs. Armed with these we managed to trace the Nataraja to the “reputed” Asia Society Museum in New York. The NYC DA team worked closely with Indian law enforcement, particularly ASI Delhi’s Ms Archana and the Idol wing’s (now transferred) ADGP Sri Abhay Kumar to build a solid case.

Ganesha Tracked to Catalogue to Art of Past

The same robber offering photos were matched to a few overseas ( non US) dealers who had participated in the Asia Week New York in 2016 and resulted in seizures.

Similarly as part of the earlier round of restitutions, we had identified the Sripuranthan Ganesha Chola Bronze from the French Institute Pondicherry archives to a volunteer photograph of a 2007 Toledo Museum (Ohio) acquisition. I have provided greater details regarding the same in my earlier article- The Great Loot of Chandraketugarh Artefacts

The Problems that Plague Art Regulation in India

The most recent restitutions are a shot in the arm for our long-drawn battle with the perception that Art theft in India is very insignificant. The official stance for many decades now has been that only a few (i.e less than 10) artefacts have been lost. As a matter of fact, the collecting lobby cabal has been using this argument to attempt to dilute the already toothless Antiquities Act while the rest of the world – particularly the major art markets of the United States and the European Union have started bringing in tougher regulations aimed at stricter policing and harsher penalties for art crimes ( source nations like Egypt and China have gone as far as capital punishment for the same).

Unfortunately, India still relies on IPC sec 380 which is essentially a provision for the crimes of theft in a dwelling house and carries a maximum penalty of just Rs. 3,000 and seven years of imprisonment (ironically even this has been amended in Tamil Nadu to make the sentence half for temple theft).

The other option is the use of the Customs Act, 1962. While the need of the hour is better heritage laws, India is instead sadly diluting the act.

India also lacks a national art squad. This in contrast to Italy which after pressuring the UN jointly with India to bring in the 1970 UN Convention, went ahead to -orm a strong central Carbernerri Art squad. This squad has secured a 1000 fold success when compared to India. Further, India has not managed to create a proper effort to achieve its cultural treasures nor build up a Loss Register – something which is mandated in the same 1970 UN Convention to which India is a signatory.

There were some very distinguished and significant artefacts whose return we expected but were sadly missing from the current crop restitutions. Hopefully, there will be another round of restitutions in the coming weeks and months and we shall find them there.

We do hope that these restitutions do not remain as mere photo ops but rather help galvanise the custodians of the establishment to go after the actual perpetrators of the crime. Currently, the five cases filed against Subhash Kapoor and his associates cover only 32 artefacts, all from the state of Tamil Nadu. Despite there being a host of restitutions to other states, no criminal action has been forthwith. This a stark reminder that the smuggling network, the kingpins and major intermediaries of the cabal are still active and engaged in the loot of India’s the cultural treasures on an industrial scale.

It is our hope to change the perceptions in the Art markets when it comes to India's cultural treasures – for too long has Indian art been thought of as fair game. We want deterrents that ensure the dollar-driven greed of the Western world does not reduce the state of our sacred objects to showpiece curios, sold with price tags to adorn the swimming pools of the rich and the famous. They only belong to the temples and people of India.