In Houston PM Modi Redefined India’s Soft Power, And As Indians We Must Stop Using ‘Naach Gaana’ As A Pejorative Term For Performing Arts 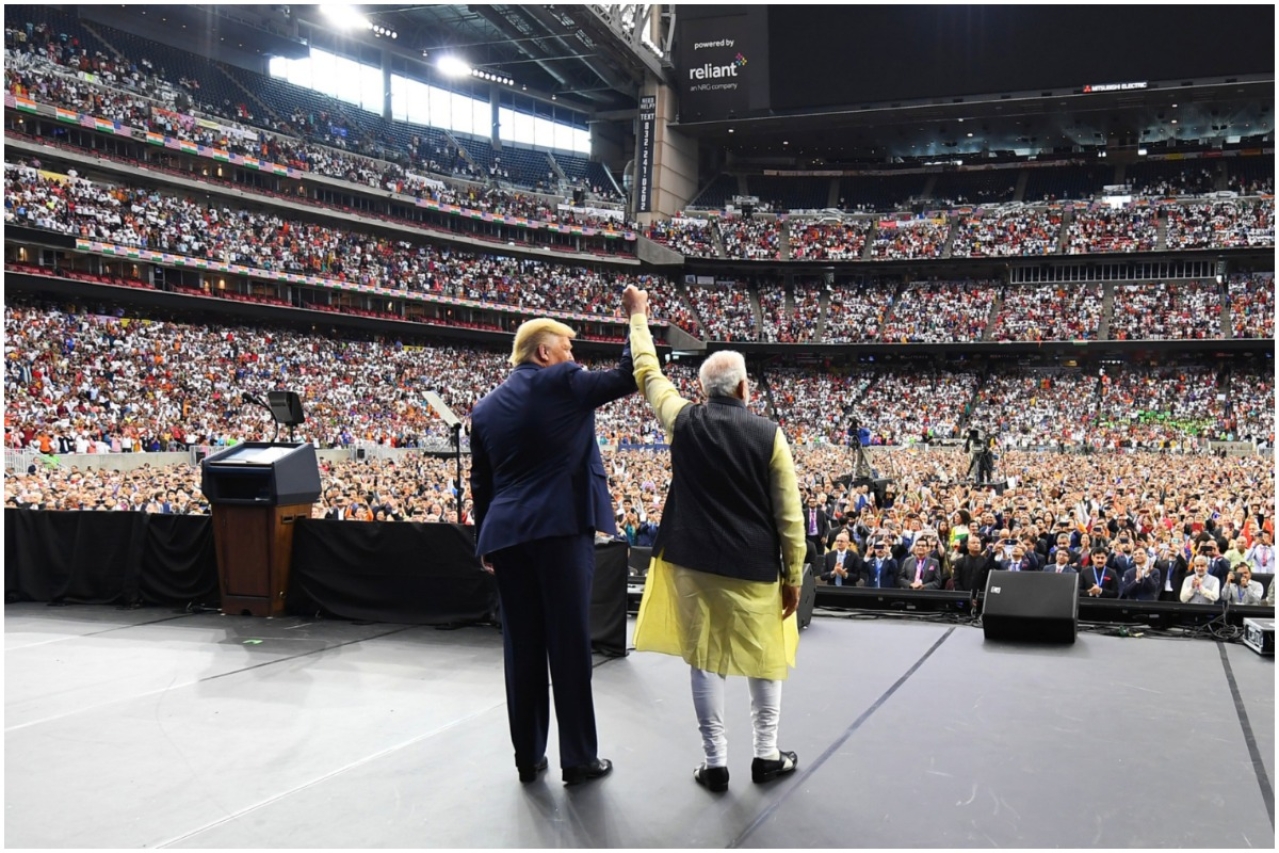 PM Modi and President Trump at the ‘Howdy, Modi!’ event.

While the Houston rally for Modi was underway, Twitter erupted with responses to the cultural event. Many people did not approve of the dance numbers. Many others found the music intrusive and jarring, yet others wanted PM Modi to arrive at the venue and salvage them from the music and dance overdose.

Some reactions ignored the background this cultural event arose from, as much as they ignored how performing arts thrive together in a home away from home, in the United States of America. And Texas.

In my view, some reactions were a bit unfair, especially the use of "naach gaana" as a pejorative for performing arts. The event has been noticed by artistes who matter and who contribute constructively to India’s soft power.

Here is a reaction from a renowned artiste Anand S Jayant and cultural activist, to this writer's tweet.

The headline of @IndiaToday TV that said - Not just a 'naach gaana' event - was a pejorative and an insult to all arts and artists. pic.twitter.com/cVCa1sMKEC

It's not the first time that "naach gaana" has been used as a pejorative. It is used for the cultural programme at Republic Day parade, when a new musical element was introduced in the ‘Beating the Retreat’ ceremony.

This lack of pride in music and the performing arts has been royally transferred to the Modi-related events involving the diaspora.

Every rally for Modi done overseas has a different character. The spirit and emotion binding them are the same. There are three elements of that emotion: nostalgia, connection and expression through the performing arts.

Here is the baffling part: some Indians become excited when they see a video of a non-Hindi hit song playing at a gym in Iran (as Twitter posts suggest), and the same set of people frowns and cringes when co-Indians perform dance numbers based on film music.

Why these different standards in the judgement of soft power and its absorption by different people in different countries?

Though it is true that the cultural event at Houston could have been better in presentation, selection and content, we have to appreciate the fact that the organisers were able to present Houston's own version of Indian pride.

Not every event can be the same. But even to those who are closely and deeply tuned into culture and cultural performances, and different scales, judging the Houston show did not come easily.

There is a way to look at it lightly. Indians have so time-managed their dance numbers at weddings and wedding events in general — since Karan Johar movies arrived — that they are missing the beauty in the efforts displayed at the Howdy Modi! event.

But, look, Karan Johar has hailed the event!

Proud moment for India and fellow indians across the globe . What an inspiring and solid address by @narendramodi . @POTUS also in awe as crowd cheers for the indian prime minister.#HowdyModi

Neighbour's Envy And Your Lack Of Pride

The Houston event was put together by citizens. For citizens. Flaws are bound to be there and they are beautiful.

The event seemed to lack a better sense of sequence, and there was a misreading of the time slab. Fillers were required.

Not every cultural event is perfect. During this same decade, a host nation at the Olympics has played an imperfect version of the Indian national anthem. Imagine tolerating this wrong tune played for every prize won!

Back in India, there was a sporting event organised during the UPA regime — in the news not for the best of reasons. The opening ceremony, though it involved some of the best creative choreographers, had its flaws. But as Indians, we were all proud of the effort that went into making the cultural events.

Pravasi Bharatiya Divas’ cultural celebrations have been a fair mix and an unfair mish-mash of cultural events — fine and forgettable. Bollywood dancing has been part of it.

The first Pravasi Bharatiya Divas celebration in New Delhi saw a top actor struggling with his back issues as he performed to please the pravasis. The response was expectedly warm. No one then insulted the actor and his performance as "naach gaana", as viewers and headlines did yesterday.

Classical dance performances were part of the show. Do Indians describe classical dance forms as "naach gaana" in a derogatory manner? They do, many times, on social networking sites.

It is demeaning to people with Indian roots. It is insulting artistes, who enrich such events and practice for it, sometimes on their own resources. Here is how renowned artiste and cultural activist, Anita Ratnam, reacted:

Students and teachers trained and rehearsed for weeks to ANCHOR the #HowdyModi event. #notjustnaachgana does not mean that performing artists serve as mere FILLERS between politicians and speakers. Soft power is #REALPOWER. SO @IndiaToday wake up and alter your tone.

Calling it "not just a naach gaana event" is culturally condescending to people living in India, who spread positivity among the aam and khaas aadmi using these classical and folk dance and music forms.

It reeks of bias. The same bias that inflicts those people who do not want patriotic (dually patriotic) Hindu Indian Americans and Indian Americans of different religions and castes supporting Modi-ruled India.

It hints at envy — for their two-fold identity. Artistes watching the cultural event at 'Howdy Modi!' event must ponder over why and how they must do some value addition to events dedicated to Indians living overseas.

The organisers must reach out to them. Classical music and dance have the power to hold deeper meanings. They do this impromptu.

The cultural event began with performances featured under the cultural segment that was put together by professional and amateur artistes who perhaps have other day jobs.

The mix of performances is commendable. It tells that the event was backed by passionate participation to welcome Modi. Then arrived PM Modi.

The line where hard and soft power merge, has finally been spotted. The event had begun with the sacred rendition of Shabad Keertan. This was a deeply symbolic and meaningful beginning.

Indian Americans belonging to the Sikh community have played an active role in PM Modi's visit amidst protests and counter-protests. Other Indian classical dance performances saw temples in the visual backdrop. The representation was balanced.

As for PM Modi and President Trump, there was no question of letting the crowds go waste at the ‘Howdy Modi!’ event. It became the representation of the support that PM Modi enjoys and perhaps, President Trump could share as his.

The fulcrum of the Houston event is Indian soft power. Yoga was one of the many facets presented here. This time, Modi has redefined it and got warm reciprocation stamped — instantly. It's "family", "mitrata" or “dosti”, and linguistic diversity.

The same should reciprocate in our response to this historic event.

Get Swarajya in your inbox everyday. Subscribe here.
Tags:
245 Shares