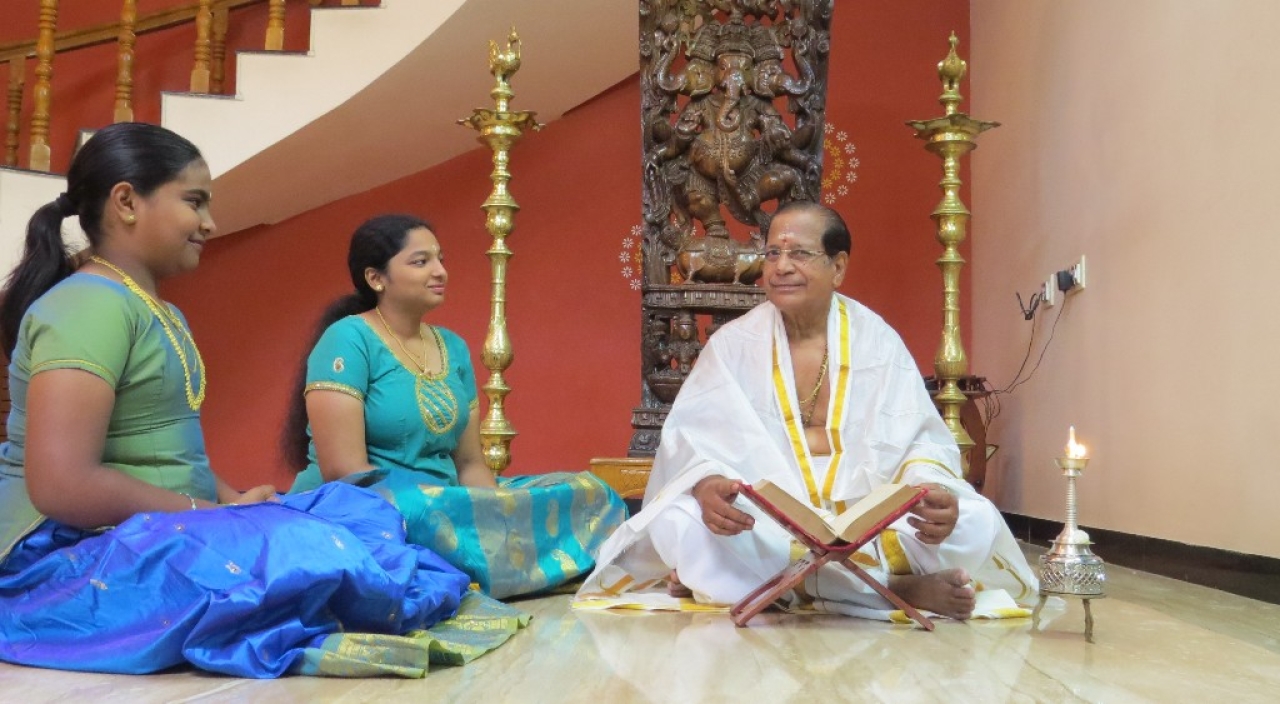 A recital of Ramayana for the younger generation. (Dhushyanthi Ravi)

A long row of elephants feasting on palm leaves, coconut and jaggery at Thrissur’s Vadakkunnathan Temple, in what is called aanayoottu (feeding the elephant), was a sight to behold when I undertook a fleeting walk-through of Karkidakam celebrations in central Kerala with a local relative in tow.

The Karkidaka month (17 July to 16 August) marks the sun’s transition to Karkidaka rasi from the Mithuna rasi, hence the name. It is fraught with paucity, so they say, but no such signs were visible during this ‘tour’ as the month seemed to have only acquired a refined format and adapted to the ‘next-gen’ liking – a far cry from the solemn observance of the season by an agrarian society that Kerala once was.

In fact, if I had dared to step into the bustling Sri Krishna Temple of Guruvayoor, I could have seen the lofty temple elephants mollycoddled with a rejuvenation therapy called sukhachikilsa, and the list includes herbal solutions, body wraps and special diet.

When Karkidaka masam ends, Chinga masam, the month of the Onam festival and a period of plentifulness and festivities, begins. An associated concept is the Illam nira (fill the house) festivity in Kerala, which is related to harvest and symbolically represents a prayer for prosperity. It is celebrated during Karkidakam when special pujas are performed for the newly reaped paddy spikes at temples.

Though the paucity theory may not have any relevance today, a typical Karkidaka masam stays true to its purpose. Beset by the raging monsoon that brings farming to a halt and confines people to their homes, it strangely brims with a deeply religious significance and health rejuvenation rituals.

As twilight falls, traditional lamps or nilavilakku take centre stage in the foliage-covered yards of the Kerala households, their quivering flames accentuated in the enveloping blackness, especially during this monsoon month. Seated around the nilavilakku, elders read the Ramayana to family members, a tradition that aims to imbibe not just the values rendered in the epic, but also helps draw strength to face the dearth, and which also lent Karkidakam its more popular name – the Ramayana masam (month).

“The reading of the Ramayana helps tide over hardship like the Karkidaka masam. With inundated fields beyond their access, people spend their time in pursuit of cleansing the body and mind. They read the Ramayana to prepare themselves to brace for the panja (lean) masam,” says Rajagopalan M K, retired assistant commissioner, Hindu Religious Endowment, Kerala, which is now the Malabar Devaswom Board that runs 1,284 temples in the state. 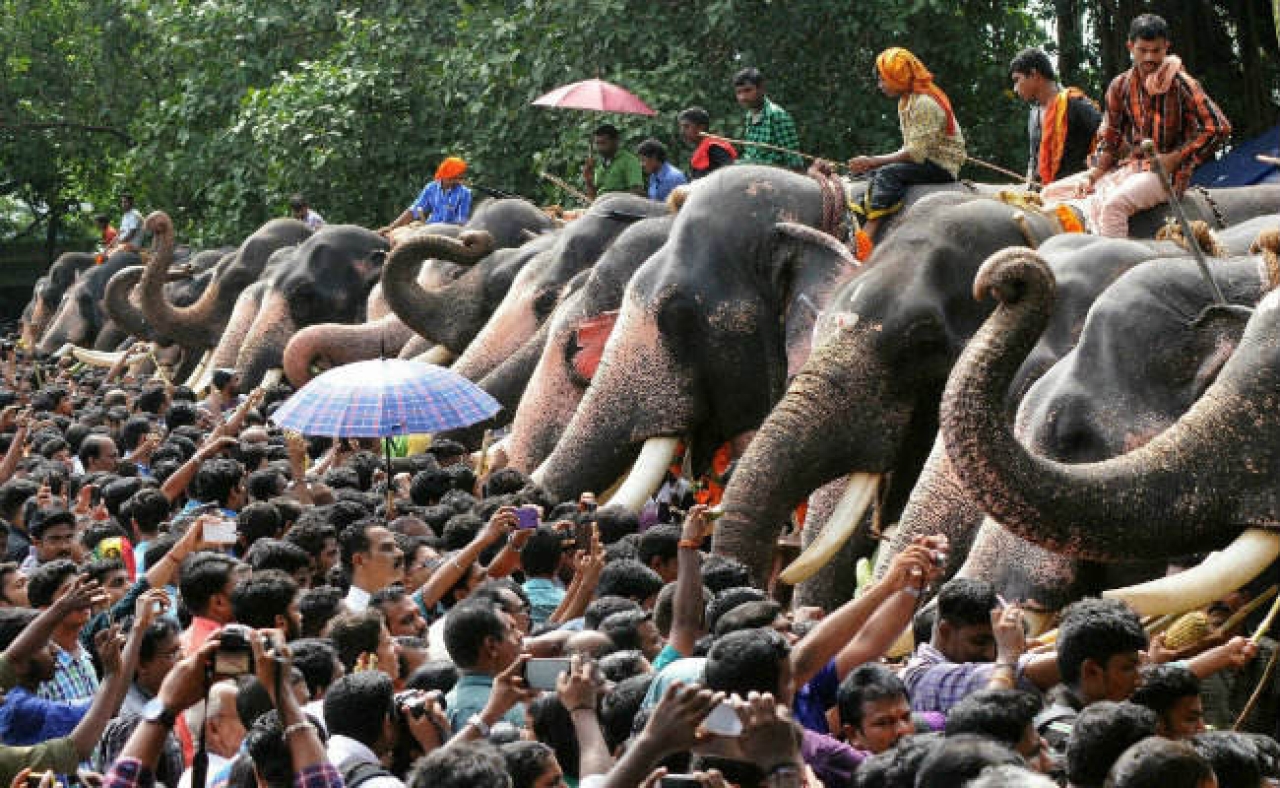 Elephants being fed at Vadakkunnathan Temple In Thrissur.

Though the nilavilakku still holds its own, Kerala, today, has been mostly weaned from the Karkidaka customs in its original form. Moving with the times, Malayalees today play the Ramayana’s audio version for their children to feed on the essence of the epic, yet another storytelling ritual felled by modernity. But Rajagopalan says there is thankfully a sustaining interest in Karkidaka events, despite the drastic change in lifestyle and livelihood. “There is a 40 per cent increase in the restoration of its activities and the number of people mingling in with the aura generated during this season is rising by the year.”

Kerala’s extended home, the Gulf region, observes Karkidakam too. The Malayalees there do it in suave style, perhaps, to not be left behind in the race to preserve cultural values. Temples and religious and spiritual organisations have kept Ramayana masam celebrations alive by ensuring their continuity through elaborate programmes, plays, public discourses, recitals and competitions based on the Ramayana – initiatives that take the nitty-gritty of the season through television to the drawing rooms of Malayalees around the world.

Sundara Kandam, the fifth segment of the Ramayana portraying Lord Hanuman, is mostly chosen to be read during this time.

“Who could be a better role model than Hanuman – the budhimaan and shakthimaan – to the younger generation? Humility despite the strength, Hanuman’s single-minded focus and devotion to his lord – Maryada Purushottam Rama – are some of the superior values that can be inculcated in the young,” Rajagopalan said.

The Ramayana is read for yet another and more scientific reason. Karkidakam marks the beginning of the second part of the Hindu year, Dakshinayana, during which the sun moves in the southern direction, impacting health of mind and body, and with its low rays affecting immunity and digestive powers. A combination of worship, fasting and practice of rituals helps overcome diseases and achieve tranquillity of the mind, a reason why the Ramayana, which shows the path of righteousness, is read with fervour.

The impact on health is also the reason why people indulge in various ayurvedic treatments. Today, ayurvedic health resorts and centres seize the Karkidaka period to offer treatment packages and a rejuvenating spa holiday, diluting in more ways than one the traditional essence of the period.

This brings into the picture the oushada kanji, a herbal gruel savoured at dawn and dusk during this month to spruce up health. This ayurvedic blend, which aids in body purification, is prepared with rice as the base and many other herbal ingredients boiled in coconut or cow’s milk and jaggery. It is anybody’s guess if the porridge is made at most homes, or even if they do, if it is an instant affair with the kanji mix bought off the shelves of a department store. However, it is distributed by institutions and organisations working hard to promote the centuries-old tradition, with the body getting the nourishment in the process.

Reading the Ramayana had its beginnings in the sixteenth century when the most elementary version of the epic in the form of Adhyathma Ramayanam Kilippattu crafted by Thunjathu Ramanujan Ezhuthachan, called the father of Malayalam language, was handed down to the lay enthusiast.

Lord Rama’s core role in making up the substance of Karkidakam does not end here. The month is also marked by a day’s pilgrimage to the four temples in the Thrissur district, dedicated to Rama in Triprayar, and his brothers, Bharatha in Irinjalakuda, Lakshmana in Moozhikkulam and Shatrughna in Payamma. Called the naalambala darsanam (pilgrimage to four temples), the trip was undertaken by foot in the bygone days, when the pilgrims sought to reflect on and celebrate the bond shared by the brothers, with package tours taking its place, today.

Karkidakam also denotes the panchamahayajna (five duties) of a Hindu householder, and of that the pitri yajna is attached great importance. The amavasya (no moon; vavu) day of the Karkidaka month reverberates with the chanting of pitru puja mantras in the wee hours of the morning. Karkidaka vavu bali, or bali, is a ritual performed by hundreds of men, women and children for their departed ancestors in batches of hundreds. The event marked by a huge footfall across the state is believed to be an obeisance to the departed souls that will help them attain moksha (salvation).

The first day of Karkidakam (July 16) is welcomed with obeisance to Lord Ganesha. This is marked by inviting the elephants into the precincts of the Shiva temple of Vadakkunnathan at the heart of Thrissur, and offering them a special feast. A day before the month begins, the house is tidied up as part of Karkidaka sankranti rituals when it is prepared for the visit of goddess Lakshmi.

Karkidakam may have reached a spa-style experience, yet it still represents the earnestness to understand tradition and use them to our full benefit. It represents a life protocol where a man is restricted by nature from venturing out and use the time to introspect and dwell on divinity and health. Since nature has no control over modern-day Karkidakam, the month is hijacked by commercial interests, more pronounced in the neighbouring state of Tamil Nadu in the form of Aadi masam discounts sale.

Get Swarajya in your inbox everyday. Subscribe here.
Tags:
338 Shares