Lothal: The Town The Harappans Built 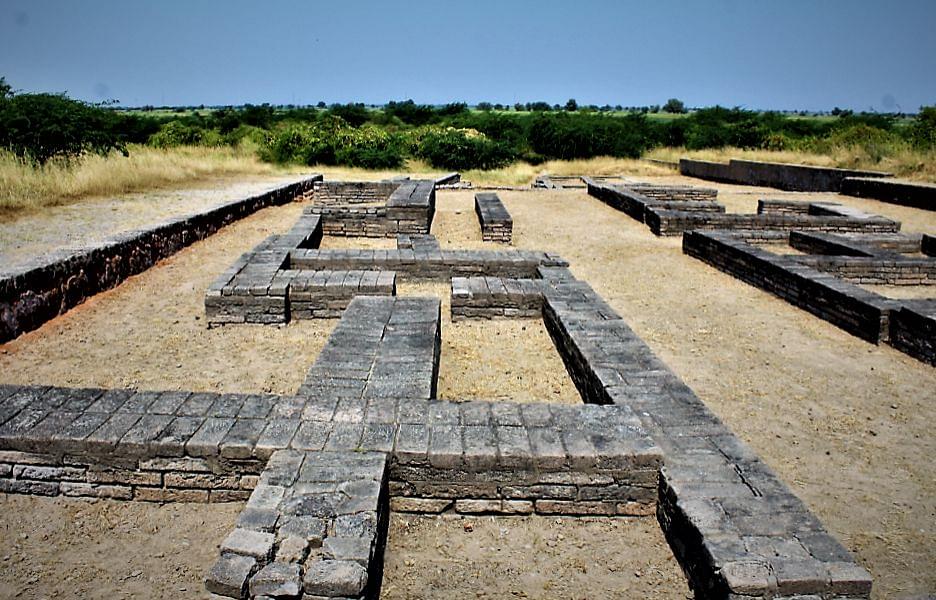 Almost 4,400 years ago, in a coastal village of what is today Gujarat entered a new group of people. There already existed people who were making fine red ware. The newcomers were from the great cities of the north. They wanted to settle around, build their own urban centre, employ the indigenous people and make the place one of the chief centres of global maritime trade of that period.

The newcomers were the Harappans and the town they built became Lothal — one of the must visit places for most Harappan enthusiasts — professional as well as laymen.

Lothal was a small Harappan city and industrial centre in the Saurashtra region of Gujarat. It was discovered and excavated in the 1950s by Indian archaeologist S R Rao. Subsequently, in 1985, Rao wrote a very lucid account of all the features in Lothal. It was published by the Archaeological Survey of India (ASI). With 23 plates of black and white photographs and with an attempted deciphering of Harappan pictorial signs and reconstruction of the structures as well as the site map, the unpriced 48 pages booklet is a classic, in the sense it introduces Lothal in a wonderful way to the visitor.

Let us take one example. Lothal was not just a residential town but it also housed a warehouse and an industrial complex. So a lot of weights, measurements, artifacts, tools etc, had been obtained. They all featured one remarkable aspect - standardisation. Now, let us just read what Dr Rao writes:

Standardization of the content and form of industrial products such as metal tools and instruments, earthenwares, and ornaments ensured a uniform quality of the product and facilitated large scale production. Throughout their vast empire extending from the present borders of Iran and Afghanistan upto Kashmir, Delhi and South Gujarat the same types of stone weights and seals, same types of copper celts, spearheads and bangles, same type of jewellery and toys and same pottery forms were in use. The same kind of grid iron planning of towns, the same width of streets and same size of bricks reveals the presence of a strong authority and strict enforcement of regulations. The homogenity of Harappan products is often mistaken for conservatism which is said to be responsible for the decay of the civilization. This is not true. It is the early realization of the benefits of standardization that was responsible for the homogenity. It did not in anyway smother initiative. On the other hand the Lothal craftsman had enough freedom which becomes apparent from their innovative skill in producing new tool types such as the bronze saw and twisted drill.

The passage is quoted just to show how much of care had gone into preparing the booklet, which explains to the reader (and potential visitor to Lothal) the archaeological as well as cultural context of the finds (and now exhibits).

At Lothal, there is a trapezoidal brick basin 22 metres by 37 metres (with 4.5 to 4 metres depth). Rao, who excavated it, identified it as a dock into which ships of the dimension 20 metres x 6 metres could enter. Built more than 4,000 years ago, this makes the structure the oldest dock in human maritime history. Soon, many Western archaeologists and quite a few important Indian historians started questioning the identification.

In 1969, Prof Romila Thapar had published History of India which immediately became acclaimed both in Western Indological circles and also in Indian state establishment. The book was updated and published by Penguin in 2003 under the title Penguin History of Early India. Here, she informs her readers: “Lothal has evidence of a structure that has been described as a dockyard, although this description remains controversial”.

Prof Thapar can be forgiven for her ignorance in 1969. But in 2003 she had 15 years time to take a clear stand. Dr Rajiv Nigam, head of the geological division of the National Institute of Oceanography (NIO) had published in 1988 a study of microbial organisms collected from the sediments of the structure. The sceptics had argued that the structure was essentially a big water tank. They had argued that it was impossible for the tidal sea waters to enter the basin. In his paper, Nigam conclusively pointed out the marine nature of the planktons found in the sediments:

Planktonic foraminifera thrive in open marine environment having at least moderate depth. Their rare presence on beaches has been attributed to high water which transport these specimens along with other material from the nearly off-shore zone, similarly it may be concluded that the presence of planktonic foraminifera in material from present study site indicate existence of high tidal range during Harappan times.

So, Lothal has become a classic example of varied disciplines of science with an archaeological discovery which revealed India as a pioneer innovator in marine trade and travels.

With all these aspects, visiting Lothal is a dream come true for any student interested in ancient Indian history. Today, Lothal is a nondescript place. Almost 85 kilometres from Ahmedabad, and 6 km from the local station, a few sign boards here and there lead you to the site museum.

As you enter the museum for a very nominal fee, one should say that the museum was better maintained compared to many local museums one finds in India. But given the archaeological importance of the site in the arena of international archaeology and Indian history, the museum is a disappointment.

The different objects obtained are categorised into groups based on the possibility of their use in the Harappan culture. For example, the ritual objects are all grouped together. This consists of terracotta spoons, ladles and terracotta cakes. Rao informs us that they had excavated a sacrificial pit with bovine bones and pottery. The toys excavated at Lothal form an impressive set. There are terracotta tops, toy carts pulled by animals and a set of terracotta games pieces which “simulate modern chess pieces”.

The weight measures which form an important aspect of Lothal have been displayed with an explanation board. The board informs us that there were three series of weights: the first one meant for weighing lighter articles and the second for measuring heavier objects and the third for weighing system. The uniformity and accuracy of stone weights of the first two series and gold discs of the third series are remarkable for the age.

Recently, in Rakhigarhi in the state of Haryana, archaeologists have discovered a joint burial that belongs to Harappan archaeological context. While discussing this burial of a female and a male, the recent study points out that the only other joint burial was in the case of Lothal. Rao had argued that the joint burial excavated at Lothal was a probable instance of a grieving wife committing suicide after her husband's death. Another archaeologist, Sarkar, had claimed that it was difficult to determine their sexes. There is an exhibit in Lothal museum of this joint burial.

There are also quite a few ‘horse-like’ figurines in Lothal museum. The presence of horses in Harappan times has always been a contentious issue for the Aryan race invasion/migration theorists. Given the fact that horse bones have been excavated in Surkatoda and ‘horse like’ figurines found in Lothal, this need not be a controversy at all. Recently, Niraj Raj the head at ancient DNA section of Birbal Sahni Institute of Paelosciences tweeted that horse DNA has been found at Harappan site:

Genetic evidence of Horses in mature Harappan period. The findings will be published soon.

There is a multimedia room in the Lothal museum. The person in charge is courteous, and there are shows about Harappan culture in English as well as Hindi. The show has all the monotony of a typical government documentary, and Lothal deserves a better, more exciting and a more detailed documentary.

Outside, there is a small semblance of a bookshop. There are a few tourist brochures and Dr Rao’s booklet on Lothal is conspicuous by its absence. Then you can go and wander into the ancient town yourself.

Like all Harappan towns, it has two quarters the acropolis and the lower town. Acropolis was where the power elite lived. The lower town housed the common people. Rao’s booklet explains:

The acropolis measures 127.4 m from east to west and 60.9 m from north to south. On the southern margin of the acropolis twelve ablution pavements or baths are built in a straight line and provided with runnels joining the main sewer. The main sewer itself ran underground as suggested by the its roof bricks.

Then there is the bead factory, the storehouse and the famous dockyard. You do not have guides to accompany you or explain any of these great features to you. If you do not have a prior introduction to Lothal (which you scarcely get in the museum, unless you are an enthusiast already) you just wander through a some ruins in an eerie silent deserted area.

The maintenance inside leaves a lot to be desired. There is an abundant growth of grasses and thorny bushes. One can see that the weather has taken a toll on the structures.

Except a very few eccentric enthusiasts, nobody usually ventures into the excavation fields of Lothal which means even those minimal number of visitors to the museum may lose their lifetime chance to see the world’s oldest dockyard and even those who venture inside may hardly know what is what and the importance of these exposed structures.

Training local youths as guides, even creating a dramatised reconstruction using the village people around would have a real dramatic effect. Think of a youth dressed as a Harappan guard for the dockyard, explaining to you how ships entered the dockyard from the sea which is currently 20 km away.

Imagine a local actor dressed up as a Harappan town head living in metropolis or a Harappan trader selling you some replica of Harappan goods. Actually, this is a museum filled with potentials - unfortunately a very little of that is explored. There can also be a small reference and a tribute to S R Rao, the pioneering archaeologist of the site.