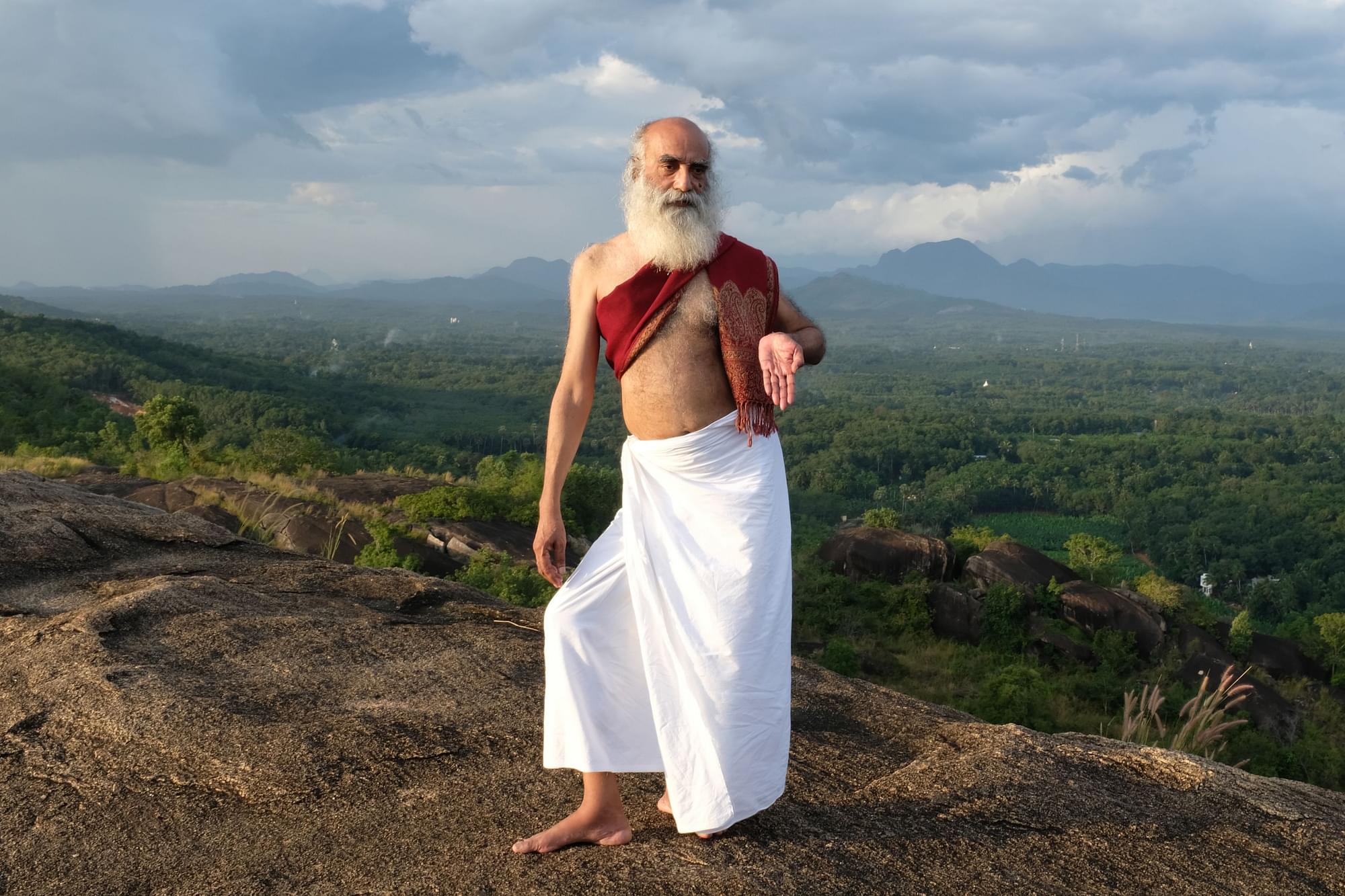 Virtual Bharat’s most recent film is set in Koolimuttam, Kerala. A story of a man, a rebel, a master, known to his disciples and thus to the world by one name; “Manu Master,” he says with pride as he looks at the nature around him.

His eyes are kind and filled with strength and wisdom. His red shawl flutters in the wind.

Manu Master was born in Koolimuttam in the 1960s as Abdul Munaf. Little Abdul loved the arts. He accompanied his uncle to Kathakali recitals, performances and katcheris alike.

He jumped across the compound wall at school every day to simply watch and admire the dance lessons that were being taken by a teacher right next door.

Spotting his interest in the arts, his uncle enrolled him to learn Bharatanatyam when he was only 12, and that marked the beginning of Abdul Munaf’s journey into Bharatanatyam.

Bharatanatyam was considered a temple art form. The postures and grace of the dance are a reflection of those of several Hindu gods and goddesses.

Abdul Munaf was not a part of this culture, and was thus regarded an outsider.

He trained in several other dance forms — Mohiniyattam, Kathakali… but his heart always lay with Bharatanatyam, especially the temple dancer style.

At the age of 20, he decided to move to Tamil Nadu to train and master the traditional style of Bharatanatyam — one that had been banned by the British in their move to stamp out Indian culture.

Today, he is one of the leading exponents of this style of dance. Abdul Munaf believes that “the true god, is love, and art is the medium to reach love”.

“Mohabbat,” he says, is what his dance is an expression of. He refused to allow aspects like his name to get in the way of his love for dance.

Abdul Munaf took the name ‘Manu’, a nickname given to him by his mother, and started to practise under this name.

He admired the tantric school of the dance and says it was his Guru Chitra Visweswaran, who changed his life.

She showed him how the body was but a small replica of the entire universe, and thus how through certain postures one could unveil the maha mantras (sacred truths of the world).

His movements echo simplicity, grace and freedom of postures of love and desire — characteristic of the tantric school of Bharatanatyam.

His audience is spellbound when Manu Master moves. The very air around him changes. There is silence and magic to his performance, and even the simplest of mudras can bring tears to the spectator’s eyes.

Manu Master today dedicates his life to not only keeping this tantric tradition of Bharatanatyam alive, but to his disciples as well.

He looks at them with a smile, and says, “my teachers have always shown me the right path, but I want them to be able to choose their own paths”.

As the team of Virtual Bharat shot with Manu Master, they were spellbound by not only his movements, but the way these movements echoed the beauty of the nature around him. Watch the film capture his story through his dance, on Virtual Bharat’s YouTube page.