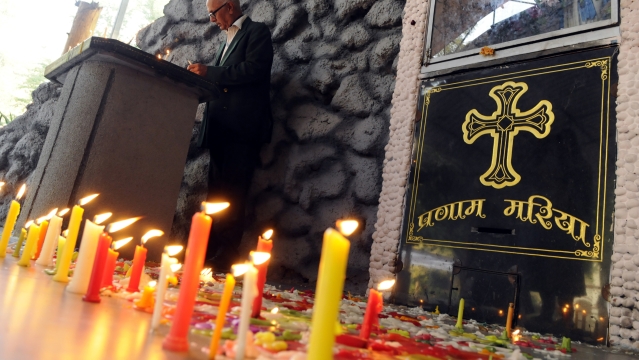 For Christian missionaries, India is an unfinished project, and it is not because of lack of trying. Every conceivable means has been tried to convert the ‘heathens’ into the ‘true’ religion of Christ, from downright annihilation (inquisition at Goa) to sophisticated racial theories (Bishop Robert Caldwell’s Dravidian race theory) meant to strike at the very foundation of Hinduism.

During the early nineteenth century, the reigning consensus among the missionaries was if the learned Brahmins could be converted into Christianity, then the whole super-structure of Hinduism would collapse, and the rest of the population could be converted with ease. A missionary with a good command of Sanskrit would be well received by the Pandits and educated Hindus, because “if he (missionary) can quote from Bhagavad Gita, his own religious instruction will come with greater weight.”

Colonel Joseph Boden, a British military officer with 25 years’ service in India, gave a generous grant to establish the Sanskrit Chair at Oxford University in 1830. He was “of the opinion that a more general and critical knowledge of [Sanscrit] will be a means of enabling my Countrymen to proceed in the Conversion of the Natives of India to the Christian Religion, by disseminating a knowledge of the Sacred Scriptures (Bible) amongst them more effectually than all other means whatsoever.”

With this endowment, the Boden Chair of Sanskrit was established at Oxford University in 1832 to train missionaries in the Sanskrit language, so that they can translate and disseminate the Bible into Sanskrit and preach to the Hindus the ‘truths of Christianity’ couched in Sanskrit terminology.

Among the final two contenders for the Boden professorship in 1832 was the principal of Bishop’s College, Calcutta Reverend WH Mill. Mill’s claims to being a Sanskritist rested on his composition of Christa-Sangita (Samhita), or the Sacred History of Our Lord Jesus Christ in Sanskrit Verse, a Christian theological text consisting of 18 cantos set in the dialogue form and metrical pattern of Bhagavad Gita.

Gloating over the success of his work, Mill wrote, “Many Brahmans have expressed a strong desire to read this work: and one heathen Pandit now teaches it to his heathen pupils…..The most melancholy trait in the account of this work (is) the readiness with which these devotees of superstition can assume the ideas and expression of a faith most opposed to it.” He concludes that “by a pure and holy substitute”, he hopes to displace “the monstrous and demoralizing legends of pagan worship.”

We also come to know that “to give to the historical truths of Christianity a dress borrowed from the metrical legends of the Hindus is no novel idea”. During those days, many Christian theological books were published using sloka meter and Puranic stories, and in some cases, the authors were given names of Vedic rishis such as Narada, Atri and Jaimini, to impart the ‘truth of Christianity’ with the stamp of Vedic authority.

In the election of 1830, Mill lost by a whisker to the great Orientalist, Professor Horace Wilson, who was accused of being ‘irreligious’ and even worse being favourably disposed towards Hinduism. In the elections of 1860, however, the evangelicals ensured that Monier Williams won the Boden professorship. The criteria for professorship was not merely Sanskrit scholarship, in which case Max Muller was the clear winner, but the ability and willingness of the Boden professor to use Sanskrit as a vehicle for converting the ‘heathens’ of India.

In his inaugural lecture delivered at Oxford University in 1861, titled, ‘The Study of Sanskrit in Relation to Missionary Work in India’, Professor Monier Williams made the most persuasive case of why a missionary should study Sanskrit:

…if the missionary desire to understand the system which he seeks to overthrow, if he wish to gain a correct insight into the national mind, to acquire any real hold on the hearts of the natives, and conciliate a respect for himself and his office, he ought to know Sanskrit…..(Sanskrit is) the one bond of sympathy, which, like an electric chain, connects Hindus of opposite characters in every district of lndia….that the national character is cast in a Sanskrit mould, and that the Sanskrit language and literature is not only the key to a vast and apparently confused and unmeaning religious system, but is also the one medium of approach to the hearts of the Hindus, however unlearned, or however disunited by the various circumstances of country, caste, and creed.

And here is his supremely awe-inspiring view to appropriate Sanskrit for Christianity itself:

“Such, indeed, is the exuberance and flexibility of this language and its power of compounding words, that when it has been, so to speak, baptized and thoroughly penetrated with the spirit of Christianity, it will probably be found, next to Hebrew and Greek, the most expressive vehicle of Christian truth.“

Monier Williams competitor for the Boden professorship, Max Muller, though a great savant of Indian civilisation, was not averse to missionaries converting the ‘heathens’ into Christianity. In fact, he advised, that the missionaries should focus on converting the entire caste rather than an individual. He suggested that caste, “which has hitherto proved an impediment to the conversion of the Hindus, may in future become one of the most powerful engines for the conversion nor merely of individuals, but of whole classes of Indian society.”

By the end of nineteenth century, however, Sanskrit was in terminal decline in India, largely due to the deracinating effect of English education on educated Indians and Sanskrit’s irrelevance as a means of upward social mobility. Therefore, Sanskrit as a tool of conversion was gradually abandoned by the missionaries. Rather than converting the Brahmins through the use of Sanskrit, Sanskrit was vilified as a tool of cultural ‘subjugation’ by the Brahmins.

Bishop Robert Caldwell's fantastical racial theories of how ‘light skinned Aryan Brahmins’ imposed the caste system and Sanskrit on hapless ‘Dravidians’, was increasingly accepted as the political orthodoxy in the south, which led to burgeoning anti-brahmin movements at the beginning of 20th century (and still continues today).

Now after this very brief survey, the question remains, was there ever an intellectual counter by the Hindus against this sustained effort by missionaries to dismember Hinduism? Was there ever an effort made to pay back the other side in his own coin? Was there ever an attempt to study and understand the adversary, in order to ‘overthrow’ his system? Did a Hindu ever learn Latin or Greek, and made these languages the ‘most expressive vehicle of dharmic truth’?

The pickings are very slim and dwarfs in comparison to what the missionaries produced. Arguably the first critique of Abrahamic faiths from a dharmic perspective came from Maharishi Dayanand Saraswati in 1875 in his seminal work Satyarth Prakash. However, this was more of an exception. Except for a scholar here or an activist there, there was no institutional response from the Hindu society, to take this intellectual battle to the other camp. The only battles that were fought were defensive in nature.

In the past decades, Hinduism and Sanskritic studies in the western academia are increasingly conducted under the theoretical umbrella of post-modern deconstruction and psychoanalytic criticism, while the missionaries use liberation theology framework to convert (‘liberate’ in missionary parlance) the economically vulnerable Hindus. The missionaries became scholars of Hinduism in an effort to ‘overthrow‘ it, but most Hindu activists and intellectuals don’t even understand the terminology, leave alone ‘overthrowing’ the system of its adversary.

No system survives for long if it fights only in defence.