More Indic Than Ever: The Amusing Story Of The ‘Dravidian New Year’ 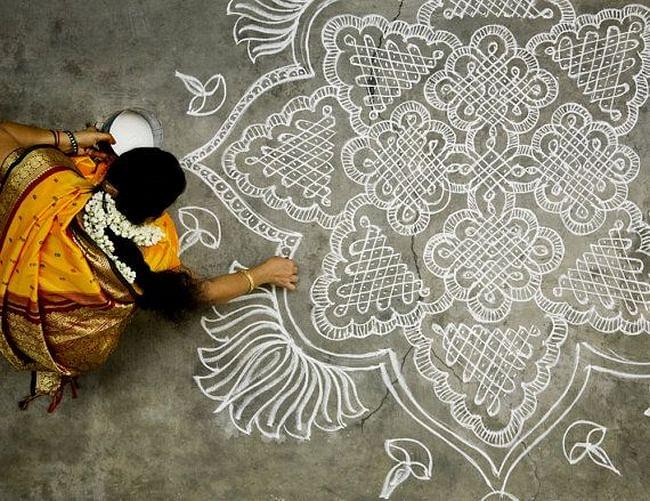 A woman draws a kolam (rangoli) for the New Year

We get the feeling of familiarity in the strangest of places. I was watching Bruce Lee's Way of the Dragon when I was 10 years old. It is about some Chinese men, who run a small Chinese restaurant in Rome, fighting against an Italian mafia trying to take it over. The fights were of course impressive and who can forget that wonderful dance like fight between Bruce Lee and Chuck Norris - both great legends.

However, there were two things that caught the Indian in me. One was when Tang Lung (Bruce Lee) introduces himself to the Chinese restaurant workers. All workers except one have assumed Christian names, Tonies and Jimmies. As everyone self introduces, Tang Lung looks unenthusiastic. When at last one worker introduces himself with a Chinese name, the hero beams with joy and cheerfully talks to him.

The second was the scene of them celebrating the Chinese New Year. Though in Rome, they celebrate the traditional Chinese New Year in a way a 10-year-old Tamil Hindu could connect with. The giving of money by the elders to the young members of the family on the New Year day, made me exclaim, “Do they also celebrate their New Year like us?”

It would be decades before I discovered that all pagan cultures celebrate the New Year in the same way. They are linked to cycles of nature, both celestial and terrestrial. To them the time is a great circle or a grand spiral. It is not linear. It is associated with the ever changing yet ever present cycles in the web of life. The blossoming of new life, the happiness of new Spring - all add to the beauty of the traditional Indic New Year.

With various slight modifications, all linguistic cultures in the larger Indian landmass, rooted in the Indic cultural substratum celebrate the coming of Vishu (new year festival of Kerala) and Chithirai (a festival celebrated in April in Tamil Nadu). Punjab’s Baisakhi is the day when the great Guru Gobind Singh forged the Khalsa to fight against an expansionist monoculture thrust upon our nation.

However, with the coming of the British, the Gregorian calendar was atrociously forced upon us in a monumental way. All our institutions had to follow it and still follow it. The great physicist Meghnad Saha who made an exhaustive study of world calendar systems as well as various regional calendars of traditional India, crisply stated that:

the current Christian (or Gregorian) calendar... is in many ways an extremely inconvenient and unscientific system of time reckoning.

The Gregorian calendar makes a quasi-mythological event the starting point of the calendar because of a history-obsessed religious belief. It is anything but secular. But what is interesting is that even this new year follows another cycle in nature - the solar cycle - starting with the winter solstice.

The problem, though, is that instead of recognising this inherent natural cycle (which is also embedded in the story of their version of a solar deity whom they call Jesus, who is born during winter solstice and resurrects during spring equinox), they created an artificial system to suit their beliefs. Then they went on imposing this calendar on all other cultures, claiming historicity.

If the colonialists were unscientific and yet arrogant in imposing their version of the calendar on far more advanced forms of calendars which had evolved in other cultures they colonised, the Dravidian ideologues went a step further.

The Dravidianist notion of rationalism is aping their colonial masters irrationally. So they claimed that the traditional Tamil New Year was an Aryan-Brahmanical conspiracy. They wanted to invent a new year that comes closest to the calendar of their white colonial masters. Epigraphist S Ramachandran opines that this is the reason why they got hold of Pongal - the harvest festival of praying to the sun which comes close to winter solstice and declared that it was the original Tamil New Year.

Since then whenever Dravida Munnetra Kazhagam (DMK) is in power they 'officially' change the Tamil New Year to Pongal. And AIADMK reverts it back to the traditional Tamil New Year.

This has turned the Tamil New Year, an occasion for happiness and joy, into a day of political controversy. Tamils, at least some of them, simply lost a day of celebration to Dravidian politics of vanity.

Now comes the proverbial twist in the tale, Eminent physicist and Indologist, Professor Subash Kak points out that actually in Hindu systems there were two year cycles. 'The ritual one started with the winter solstice (mahavrata day) and the civil one started with the spring equinox (visuva).'

He also points out that according to Kausitaki Brahmana, the year-long sacrifices began with the winter solstice. In other words, the Dravidian enthusiasts in their antipathy to everything Indic and in their irrational admiration of everything colonial, chose a more 'ritualistic'—or in their parlance— the ‘more Brahmanical' of the two traditional years. What an irony that arises from cultural illiteracy!

Traditional India has opted for the more scientific or again in their language 'more secular' New Year. In a way this was bound to happen. Every time the Dravidian ideologues tried to assert their separate identity they have made themselves more Hindu, as in the case of the famous 'Mother Tamil anthem' which starts with the very Vedic imagery of the earth wearing the ocean as her garment. Even the visualising of Tamil as a Mother or Goddess is a very Hindu idea as the Lalita Sahasranama speaks of the Goddess as being all languages.

So, there is simply no escaping for the Dravidianists from their Hindu nature if they want to assert the true Tamil identity. The same goes for the Tamil New Year also.

A very happy, truly scientific, and secular New Year to all!