Tale From Assam: How The State’s Vaishnavite Culture Instills Strong Conservation Ethos Among Its People 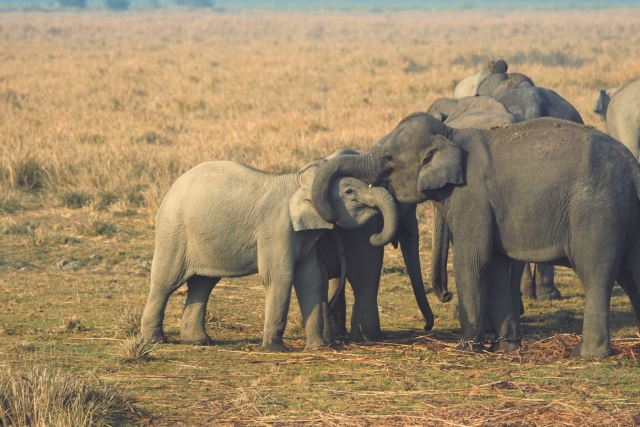 A few days ago, a YouTube video of a large number of residents of a few villages in Upper Assam’s Tinsukia district performing the last rites of 36 vultures that had died of food poisoning generated a lot of cheer among conservationists and nature-lovers the world over.

That act was considered to be a fine example of man’s love for nature and wildlife, and of the spirit of conservation among a native populace.

Residents of Dhulijan, Betoni, Borgora and Tamuli villages that fall within the jurisdiction of Doomdooma forest division conducted the last rites (shradh ceremony) of the vultures which had died after feeding on carcasses of cows that had died after consuming contaminated water from a pond.

Wildlife Trust Of India (WTI) chief executive Vivek Menon, who witnessed the events firsthand, first tweeted about it a few days ago.

According to this report published in EastMojo, a popular news portal of North East India, the death of the vultures on their farmlands distressed the villagers so much that they decided to hold a shradh ceremony, complete with all traditional rituals.

Six slender-billed and two white-rumped vultures, which were also taken ill after feeding on the cows’ carcasses, could be rescued and revived. They were released by a veterinary team on Monday (February 1) morning. The cause of the deaths was put down as ‘accidental poisoning’.

EastMojo’s correspondent Rishu Kalantri who wrote the report said that the villagers conducted the last rites of the vultures in exactly the same manner as they would do for humans.

The grief-stricken villagers, along with forest department officials and veterinarians, as well as WTI’s Menon, also offered prayers for the well-being of the eight vultures which were rescued and released.

Though conservationists and naturalists from the rest of the world were pleasantly surprised at the news of residents of a few remote villages in Assam conducting the last rites of dead vultures, this is actually nothing new for the people of Assam.

A deep respect for flora and fauna, and for all living beings, is an integral part of the Assamese ethos. The state is full of successful conservation stories.

Last rites are regularly conducted for not only domestic cattle and pets, but also for wildlife like monkeys, elephants, rhinos and other fauna, especially if they have died of unnatural causes.

For instance, every year, floods wreak havoc on the famous Kaziranga National Park and claim the lives of a few big animals like elephants, rhinos, tigers, bisons and deer.

Forest officials, and residents of villages in the periphery of the park, routinely hold shradh ceremonies whenever the bodies of these animals are found.

Hunting of wild animals and birds is taboo amongst the Assamese, and has never been a sport among the erstwhile kings and nobles of the state.

This is in stark contrast to the rest of the country where hunting was an important sport for the royalty. The Assamese, with their conservation ethos, even set themselves apart from many tribes of the North East who, till recently, used to hunt wild animals and birds for consumption.

“The explanation for this lies in the teachings of Srimanta Sankardev, the 15th century saint who started the Bhagavat movement in Assam. Vaishnavite philosophy imbued love for nature and flora and fauna among the people of the state,” Atul Pathak, a historian, told Swarajya.

Other historians contend that even before Sankardev, the Assamese used to practise conservation and there are no accounts of kings or people hunting wild animals or birds even for their own consumption in the ancient texts.

“Not a single ancient text mentions anything about people hunting wildlife. Rather, there are accounts of people and rulers saving wild animals and birds,” said historian Madhav Phukan.

Phukan states that the teachings of Srimanta Sankardev and Vaishnavite philosophy only strengthened the inherent love for nature and the ethos of conservation that existed among the Assamese.

Manjula Sarma, a researcher at Gauhati University, points out that images and motifs of wild animals like elephants, tigers and rhinos and birds like cranes, adjutant storks and vultures were found in many paintings and weaves of the past.

Assam is replete with many successful conservation stories, one of the significant recent ones being that of the greater adjutant stork (hargila in Assamese).

The population of the bird started decreasing alarmingly due to loss of food and habitat. Conservationist Purnima Devi Barman stepped in a few years ago, mobilised simple folks of villages on the outskirts of state capital Guwahati and scripted a successful and inspiring conservation story (read about it here, here and here).

“It was quite easy convincing the villagers about the need to protect the bird (hargila) by providing safe nesting places for them and adopting other measures. That’s because the Assamese are, by nature, conservationists,” Barman, who has won many awards, told Swarajya.

The hargila today features in gamosas and mekhela chadors woven by many villagers not only in the vicinity of the bird’s habitat, but in the famous weaving centre of the state — Sualkuchi — in their traditional looms.

Conservationist Bhaskar Neog points out that poaching of wildlife was unknown in Assam till a few decades ago. The poachers today are mostly Bangladeshi-origin immigrants and their descendants, as well as some tribals.

“An Assamese will never hurt or hunt a wild animal or bird, and will never damage flora. Protecting nature and peaceful co-existence with wildlife is an integral part of the mindset of the people of Assam. In fact, we celebrate our flora and fauna and take pride in them,” explained Neog.

That’s why, acknowledge conservationists from outside the state, the Assamese are very proud and fiercely protective of wildlife habitats like Kaziranga and Pobitora Wildlife Sanctuary.

“Till recently, poaching of rhinos for its horn (a prized commodity used in traditional Chinese medicines) was a major problem. But the poachers were mainly Bangladeshi-origin immigrants and tribals acting at the behest of international wildlife trafficking cartels,” said Neog.

Intense public pressure on the forest department and a concerted drive by the government in recent times has resulted in the menace of poaching being largely rooted out.

“Thanks to the complete cooperation of the people of our state who are ardent conservationists and wildlife lovers themselves, wildlife protection in Assam is not a very difficult task. The challenge to wildlife protection is posed by people from outside the state or those who are not steeped in the culture of Assam,” said state environment minister Parimal Suklabaidya.

The minister said that man-animal conflict that is witnessed in other parts of the country and the world are largely absent in Assam. “People of this state respect nature and wildlife and believe in peaceful coexistence,” he added.

Assam, thus, provides an inspiring example of man living in harmony with nature.