The Delhi Durbar Of 1903, In The Colonial Eye 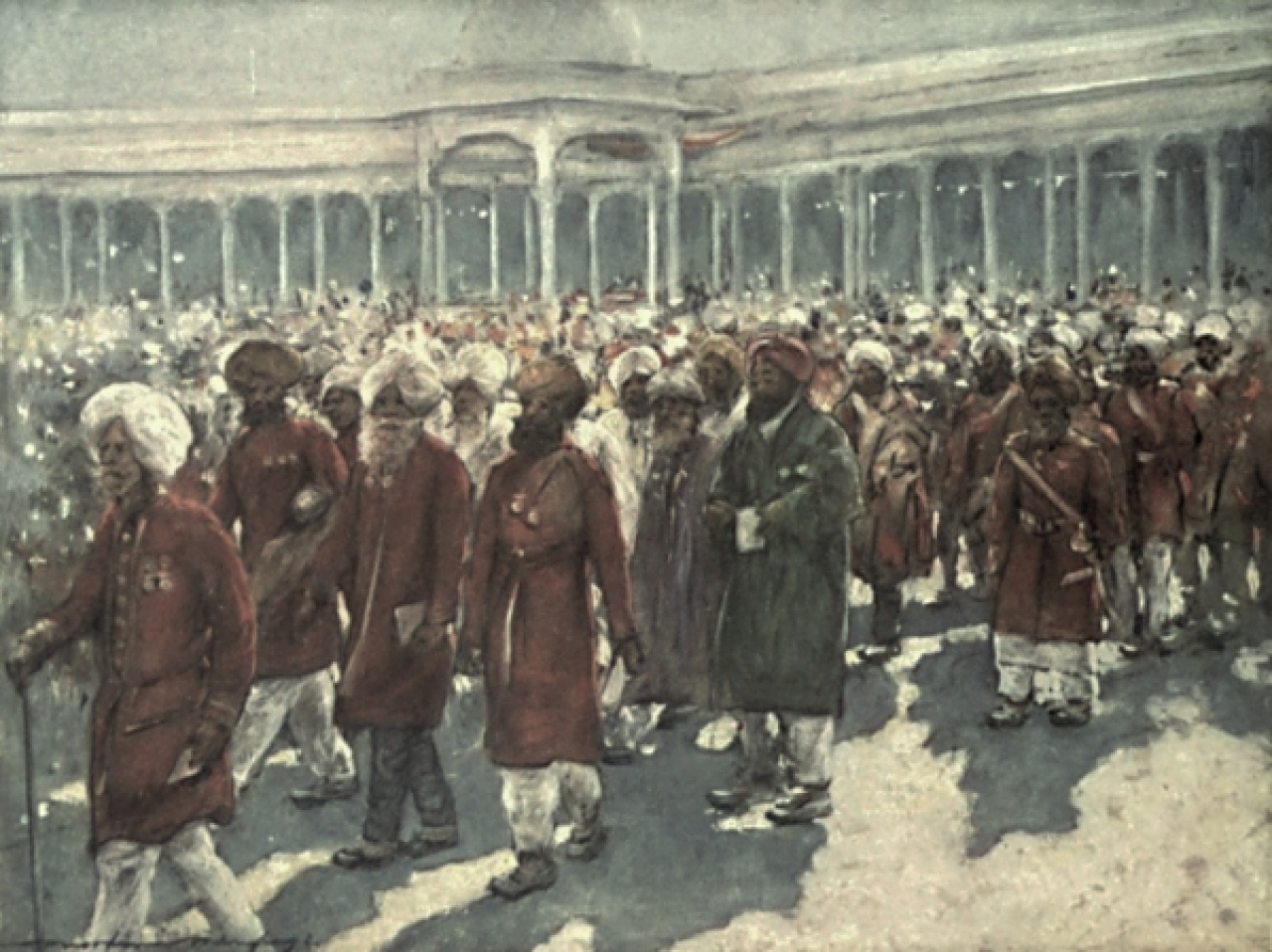 Illustration: Veterans of the Mutiny (1857) on the Great Day, Delhi, 1903; Mortimer Menpes

“The most interesting incident of the whole Durbar was when these ancient soldiers (sepoys who fought for the British during the Indian mutiny of 1857) marched into the arena to the tune of "see the conquering hero comes!” (...) “A thrill ran round the audience as they approached; for these were the Mutiny veterans of Delhi and Lucknow, the men who held India for the Empire on the Ridge at Delhi - through heat and battle and hardships.” (...) “The entire audience rose to their feet and cheer after cheer rent the air for they all felt that but for those hoary, badly dressed old men there would have been no Delhi Durbar at all that day.” - Dorothy Menpes, The Durbar, 1903

The Durbar of 1903 was held in Delhi to celebrate the succession of then British monarch King Edward VII (the great-grandfather of the current British monarch, Queen Elizabeth II) as the Emperor of India. The British Empire, its reins taken over successfully by the British government from the East India Company after the failed Indian Mutiny of 1857, was at its zenith. Lord Curzon, the viceroy of India at the time, was determined to make this Durbar (there had been one Durbar earlier in 1877 and another would follow in 1911) an awe-inspiring display of British power.

Descriptions of the 1903 Durbar – the 10-day event had in attendance emissaries from many different nations – are filled with accounts of unabashed grandeur. India’s wealth, at the service of the Empire and the Crown, was on display. Rajas and maharajas summoned from all over the country, with elaborate retinues, were paraded, fully bedecked, before the viceroy and the duke of Connaught (the King’s representative). The British Indian army marched before the imperialists who commanded them. Uniformed men and “all the glory and pride of India were assembled” to pay public homage to the British at this glittering event. 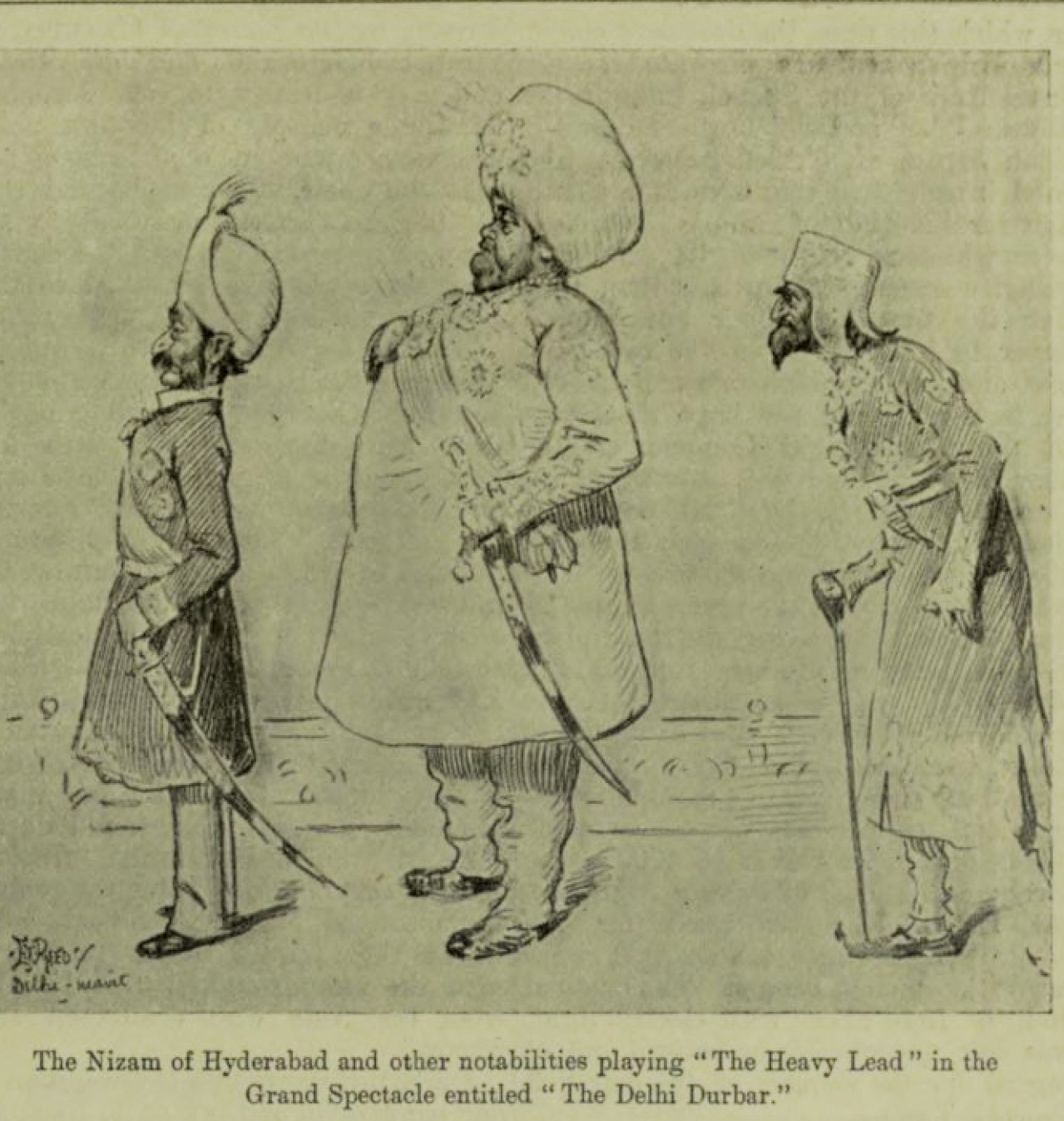 The Nizam of Hyderabad, The Maharaja of Baroda, and the Raja of Mysore at the Delhi Durbar, Punch, or The London Charivari, 4 February 1903

In a previous essay, we saw how British artists had a preferred way of representing Indian people. Much of their art portrayed the reality of the relationship between Britons and Indians, with the former depicted as dominant, authoritative, and supreme. The attire and demeanour of Indians, in contrast, was usually presented as primitive and servile. The artistic renderings, writings, and photographs of the Durbar of 1903 however set aside the usual pet themes of Nautch dancers, snake charmers, and bathing girls. Instead, they give us a glimpse into the marvel of Indian royalty, its splendour all the better to magnify the Empire, at whose feet some princes literally fell prostrate. For the Durbar, Indian kings and rajas were expected to put on a good show and come in full regalia. They didn’t disappoint, and Durbar attendees recounted tales of jewels, gold, elephants, and the overall “glittering gorgeousness of the native Princes”. 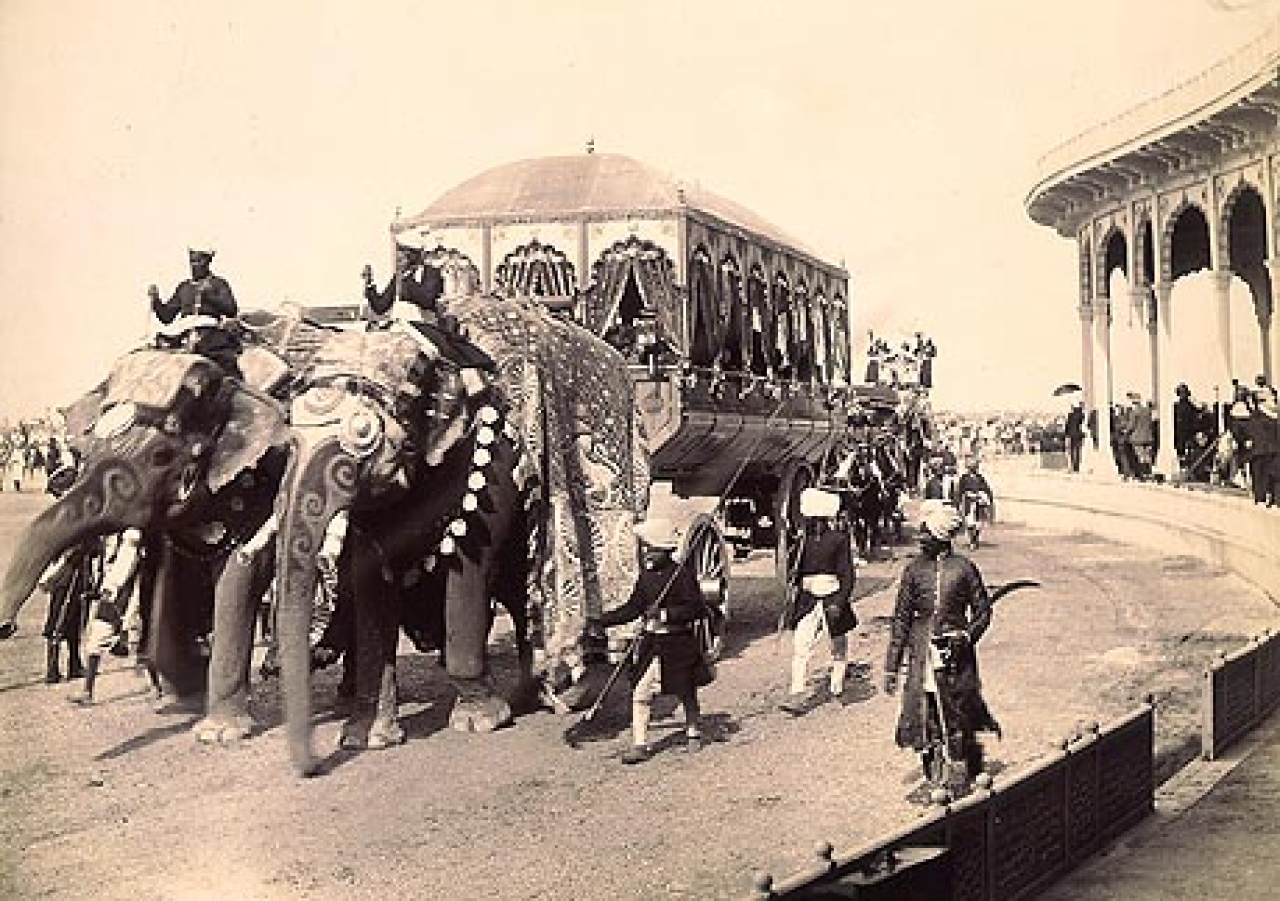 The elephant carriage of the Maharaja of Rewa at the Retainers’ Review, 7 January 1903. (Wikimedia Commons)

Among the many visitors to the Durbar was the Australian-born British artist Mortimer Menpes. He attended the event with his wife, Dorothy. Together, they published a book of his paintings called The Durbar. It is Dorothy Menpes’ commentary, descriptive and effusive, that brings the event to life. Here, she describes the parade of princes paying obeisance to the viceroy and the duke:

“One by one they filed past to do homage to the representatives and brother of the King Emperor. It was interesting to note the different bearings of the chiefs. Some who had been to Europe strode onto the arena in an assured way shaking hands with the Viceroy and the Duke of Connaught, and backing out gracefully; others were shy and self-conscious; some lost their heads and forgot the little speech they had prepared; some presented their swords; others merely bowed. Each chief seemed to vie with his neighbor in making a dazzling display of jewels. (...) One and all lost their shyness when they reached the Duke of Connaught. He took them kindly by the hand, and said a few courteous words to each. Every man left the dais with a contented countenance.”

Earlier that day, she described the Indian princes, cheering loudly and giving a standing ovation to the viceroy as he unfurled the flag of the British sovereign (the Royal Standard) at the Durbar. Some years later, in 1910, another Englishman, G E Mitton, found it “most remarkable” the “unanimity with which these native rulers have declared themselves on the side of the governing authority (the British),” adding perceptively that “it may be thought that they have done this with an eye to their own interests”. 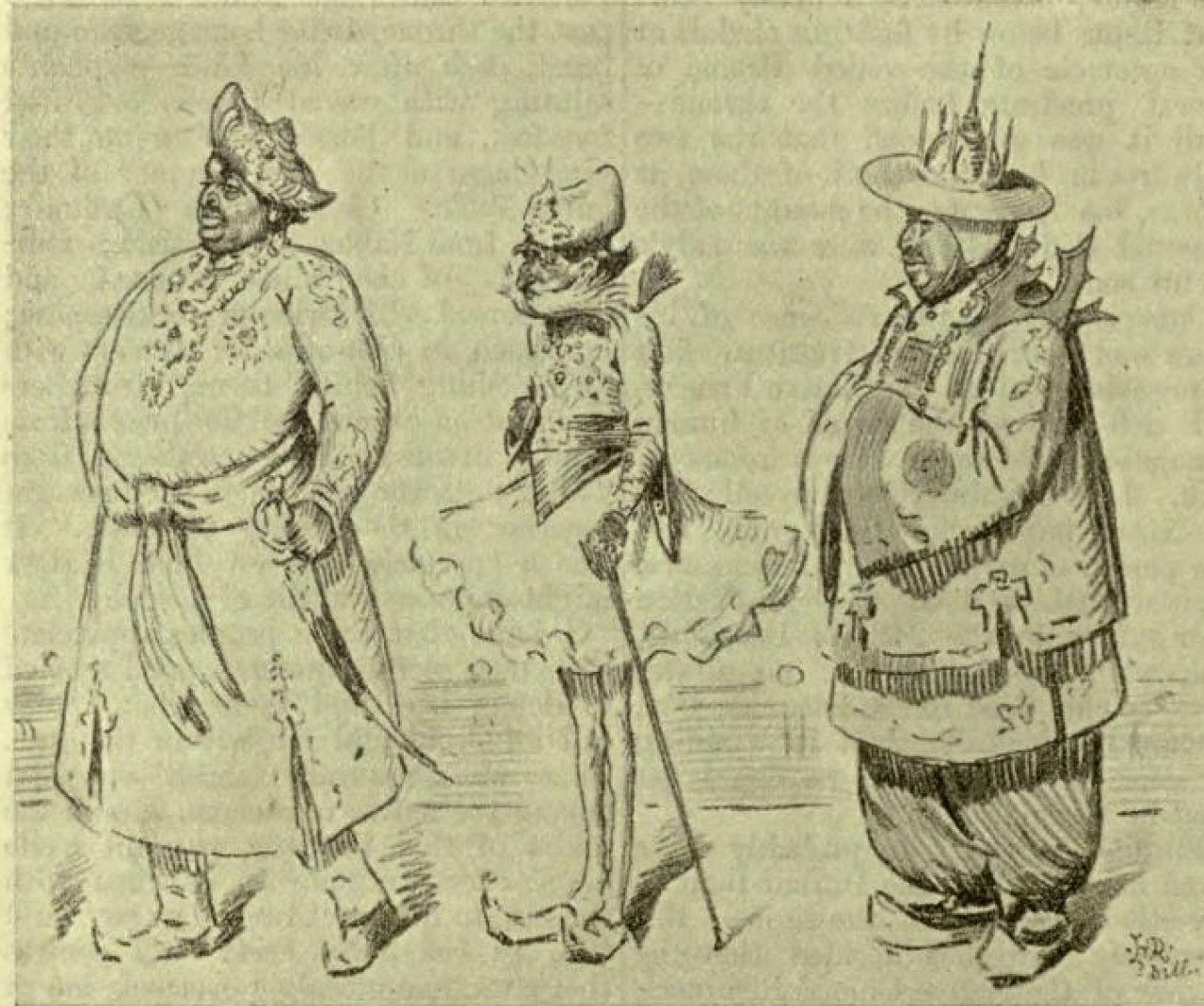 Punch, or The London Charivari, February 1903

Punch magazine of February 1903 reported in its usual tongue-in-cheek fashion: “The boy Maharajah of Patiala, looking less than his 13 years, and wearing pearls to ransom a family of Kings on his little chest, stirred the emotions of the ladies, while many a manly heart beat faster below the fighting medals at the spectacle of the veiled Begum of Bhopal prostrate before the throne.”

But even “the colorful magnificence” of Indian royalty was no match for the “stateliness and dignity” of the ruling class. Remarking on the viceroy, Lord Curzon, as he ascended the viceregal dais, Dorothy Menpes wrote: “As he stood erect and strong, his left foot resting on a footstool, Lord Curzon looked a born ruler of men, a worthy representative of the Sovereign in whose name he wields a unique power.” (...) “Nothing impressed one more amid the pomp and magnificence of the oriental ceremonial than the modesty of the Englishman who stood there bathed in the glory of the Eastern sun, holding in his hands the guiding strings of British rule.”

The Colonial Eye: How The Pretentious Indian “Baboo” Came To Be Satirised

The Colonial Eye: As The British Saw And Described Indians