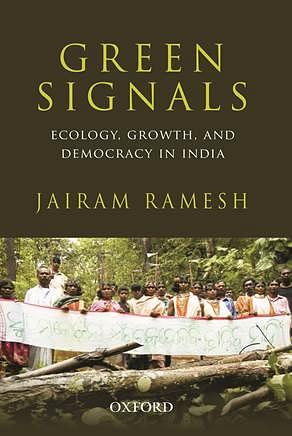 Jairam Ramesh, currently Rajya Sabha member, was Minister of State (Independent Charge) of Environment and Forests, Government of India from May 2009 to July 2011. In his book Green Signals: Ecology, Growth and Democracy in India, Ramesh talks of the challenges faced and decisions made during his term. An excerpt:

“I had spent most of my professional life, whether in the government or in the party, focusing on mainstream economic issues—the stuff that makes for high economic growth. I was more than an ardent proponent of the need to liberalize the economy and had played a role in the July 1991 ‘big bang’ reforms episode. But this commitment to high growth does not mean undermining environmental concerns.

High growth is an imperative. We cannot ignore the overriding essentiality of growth in creating jobs, in generating revenues for investing in health, education, and infrastructure. At the same time, managing environmental risks must be integral to the growth strategy. The reverse is also true—the need for higher economic growth must be integral to environmental protection. Ecological security in a framework that promotes economic growth is what the country is looking for. We cannot forget that poverty is both a cause and consequence of environmental degradation. To take-off and logically extend from the then finance minister, Manmohan Singh’s 1991 Budget speech, ‘we cannot deforest our way to prosperity and we cannot pollute our way to prosperity.’

There is no running away from the fact that developmental and industrial activities can lead to environmental degradation. The trick, then, lies in how we balance the demands of today—high growth and its concomitant benefits with the imperatives of tomorrow—the impact and cost of ecological degradation. This balance is the essence of sustainable development. This balance can be achieved through interventions to minimize and limit adverse environmental impacts.

Just as nearly twenty-five years ago we realized the need to make economic reforms fiscally sustainable, the time had come to find ways to make high economic growth ecologically sustainable. I do not believe that there is a conflict between a high-growth strategy and ecological security, it is a matter of achieving balance. In the attempt to achieve this balance where environmental concerns are an input into economic decisions, I sought to move away from the binary approach to green clearances for projects to a three-way classification—‘yes’, ‘yes, but’, and ‘no’.

Before I took over, 99.999 per cent of the clearances were in the ‘yes’ category. I increased the population of cases in both the ‘yes, but’ and ‘no’ categories. However, contrary to perception, the fact is that almost 95 per cent of the proposals for environmental clearances got the go ahead and 85 per cent of the proposals for forests projects received the green signal and on time. In striking the balance between ecological security and high growth, it is the ‘yes, but’ category that should concern us most because these form or should form the bulk of the clearances, and this is where the balance is precarious. The conditions under which the projects are given the go-ahead should be interventions that limit and minimize environmental damage, but these conditions must not stifle and strangulate.

Saying ‘no’ to bauxite mining in the Niyamgiri Hills was, therefore, logical—the total quantum of bauxite that could be mined would only form a fraction of the alumina refinery’s requirement in its entire life cycle. While the Navi Mumbai Airport was a ‘yes, but’—it was a case of balancing the need for a new airport to manage the growing air traffic and the need to ensure that the destruction of mangroves, which provide a natural barrier to Mumbai in the event of natural calamities, was minimal and that the course of the Mithi river was not altered so much as to adversely impact the city’s natural drainage system.

Sometimes, the greater economic imperatives would override other concerns—permitting SAIL to develop the Chiriya mines, which are located in the dense sal forests of Saranda in Jharkhand—is an example. Allowing for mining in Saranda Forests was a difficult decision, but I had to balance it with SAIL’s survival and the much larger economic impact of putting SAIL’s health at risk. The steel major, got a ‘yes, but’ clearance with conditions imposed to ensure that the ecological impact is mitigated.

There has to be constant assessment of the benefits and costs to any project and intervention. In some cases, the toss of the coin will favour economic growth and in other cases, it will favour environmental control. This assessment needs to be both project-specific and area-or region-specific. It is in an effort to make ecologically and economically sustainable decisions, that I called for cumulative impact assessments of several river basins, including the Alaknanda and Bhagirathi rivers and ecologically fragile areas like the Western Ghats. There was no gain in overburdening an area beyond its carrying capacity. Such assessments have to become part of the normal course of the project clearance system.

There is another aspect to achieving the much desired balance, and that is following the laws of the land in letter and spirit. Our environmental legislations encapsulate this need for balance between growth and ecological security, but unfortunately these laws have been observed more in the breach. In many of the cases such as the Adarsh Housing Society, the development of the Lavasa township, and Vedanta’s expansion of its refinery at Lanjigarh, it was a clear case of disregard for the laws of the land, which resulted in an imbalance. Rectifying the situation was seen as a step to stifle growth, when really it was about restoring balance.

The pressures to allow for short cuts in ensuring ecological security, in order to allow for economic and developmental activities will always be immense. At first glance, perhaps even in the short-run, economic growth and ecological security may seem at odds with each other. But on closer look, it is clear that environmental protection contributes to sustaining growth. I, therefore, increasingly came to the view that there is no real trade-off because economic growth that is environmentally not benign, and growth that is ecologically not secure is not sustainable.”

(Excerpted with the permission of Oxford University Press)