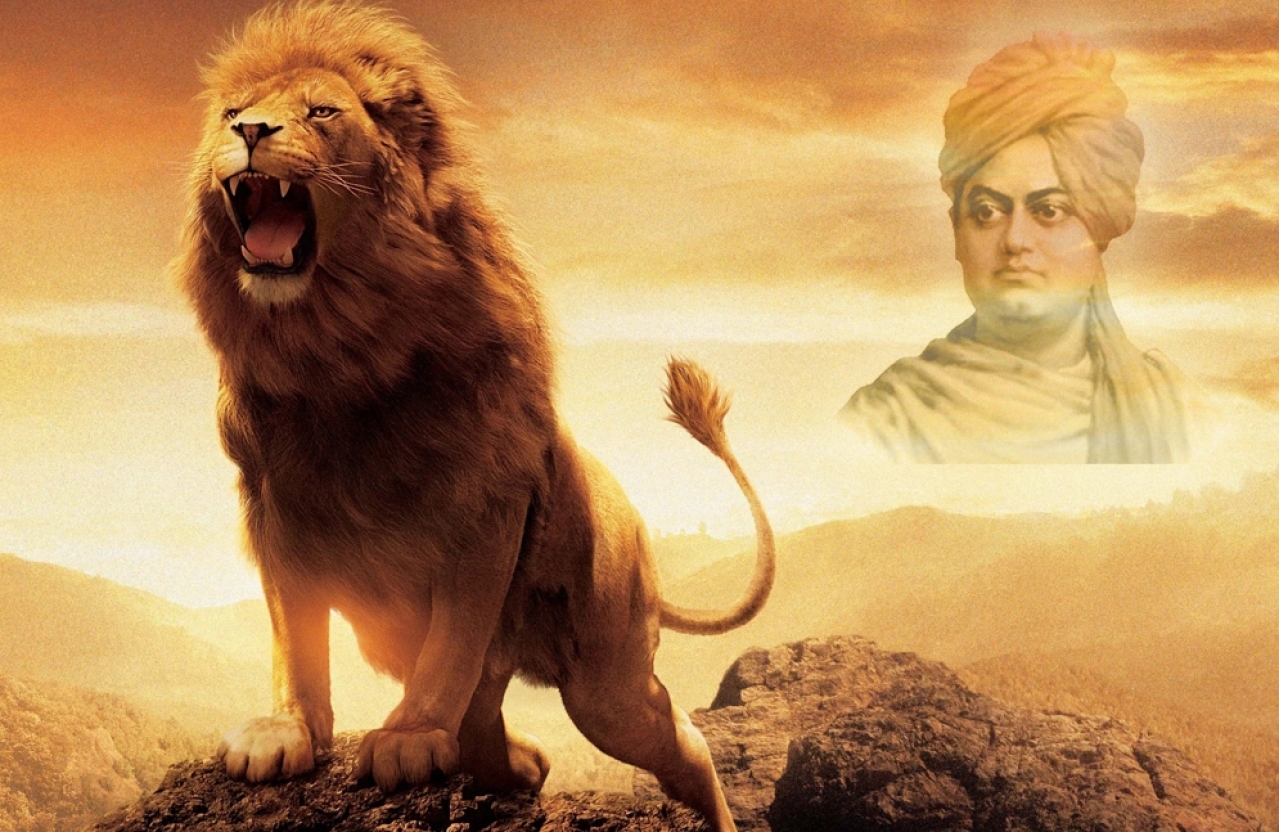 The core source of ‘The Lion King’ comes from the Lion of Vedanta — Swami Vivekananda.

The movie, 'The Lion King', originally a 1994 animated film produced by Walt Disney Feature Animation, has been released again as a computer-animated musical film, directed and produced by Jon Favreau. The spectacular improvement over the original animation is the more realistic, near life-like and almost impeccable depiction of animals in their forms and behaviours.

There are two important themes in the story. While the central one is of the lion coming out of its guilt complex and regaining his self-identity and kingdom, another abiding theme that runs through the movie is the 'circle of life'.

Both the original and the latest version of the movie highlight these themes in an impressive way. 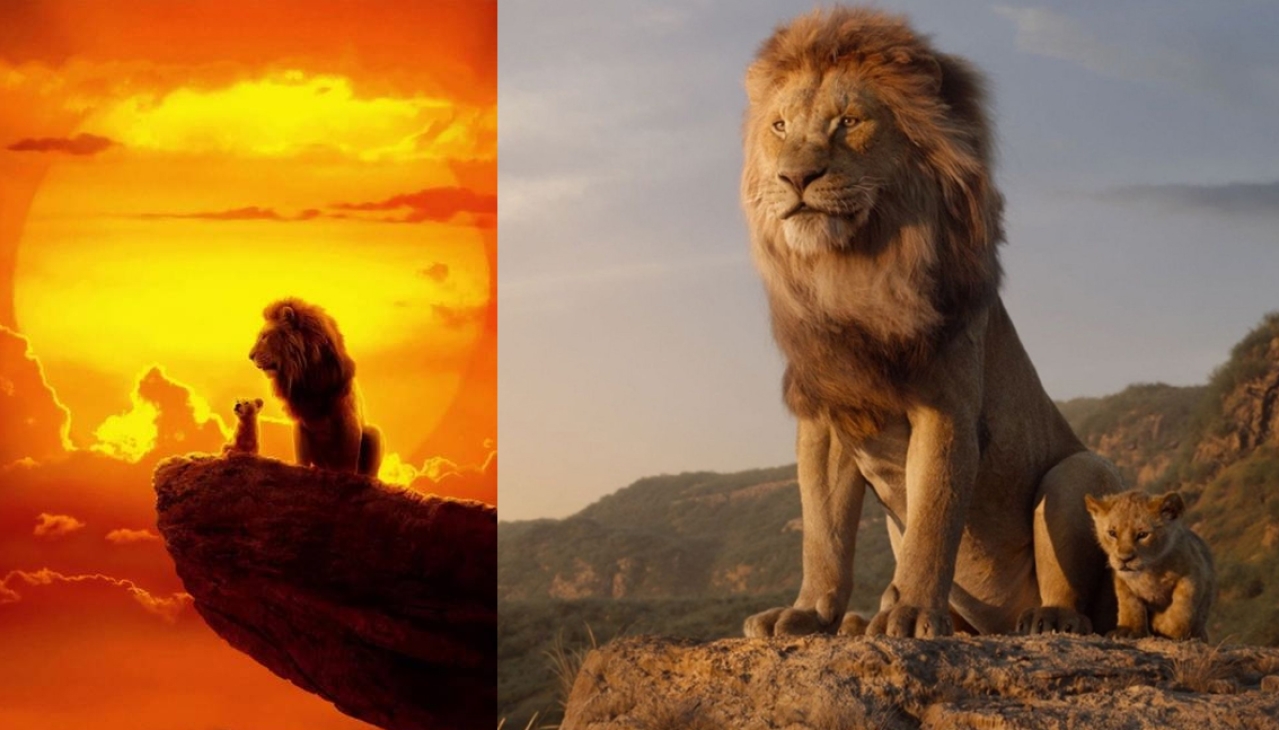 The movie is replete with symbolism derived from natural religions. The anointing of the lion cub with the juice of an ancient baobab tree by the Shaman mandrill Rafiki — which is changed in the 2019 movie to being anointed with the red powder from some roots (as baobab fruits do not yield juice!) — resonates with us Indians, as the red powder/liquid is similar to the vermilion we use to put on the forehead of children. But that is just one of the more important spiritual aspects hidden in The Lion King.

The central theme of discovering the Self is actually a well-known parable used in all Vedantic literature — often in the form of a lost prince in a forest brought up by local tribals or a lion brought up by other animals.

This parable was narrated by Swami Vivekananda in the United States. In his lecture delivered in Memphis on January 17, 1894 (as reported in Appeal Avalanche) the Hindu monk spoke thus:

Nothing is baser than calling our brother a sinner. A lioness once fell upon a flock of sheep and killed a lamb. A sheep found a very young lion, and it followed her, and he gave it suck, and it grew up with the sheep and learned to eat grass like a sheep. One day an old lion saw the sheep lion and tried to get it away from the sheep, but it ran away as he approached. The big lion waited till he caught the sheep lion alone, and he seized it and carried it to a clear pool of water and said, ‘You are not a sheep, but a lion; look at your picture in the water.’ The sheep lion, seeing its picture reflected from the water, said, ‘I am a lion and not a sheep.’

The Complete Works of Swami Vivekananda, Vol.7, ‘The Destiny Of Man’

Swami Vivekananda went on to say:

Let us not think we are sheep, but be lions, and don’t bleat and eat grass like a sheep. ...Religion is not the outcome of the weakness of human nature; religion is not here because we fear a tyrant; religion is love, unfolding, expanding, growing.

The Complete Works of Swami Vivekananda, Vol.7, ‘The Destiny Of Man’

The reporter, of course, missed the parts of the story that said that a pregnant lioness who, in search of prey, had died while pursuing a flock of sheep. But in her dying moments she gave birth to a lion cub, which was taken care of by a flock of sheep and the lion not only started bleating like the sheep but even acquired their eating habits. Another great lion found this young lion and the rest of the story is as quoted above. The story was originally told by Swami Vivekananda’s Guru, Sri Ramakrishna Paramhamsa.

There are, of course, significant dramatic changes to this original core story in The Lion King. The natural death of a mother lioness becomes the calculated murder of the father lion, Mufasa.

Then a planned sense of guilt is imposed on the young lion cub by the power-monger, Scar. The young cub is told that his father had “died for your sin and transgression. You are a sinner. Go away from your original land.” It is not hard to see from where that voice comes.

One can see that at the very beginning of the story telling, Swami Vivekananda starts by saying that “nothing is baser than calling another person a sinner.” That is exactly what Scar does. He does it by using ‘guilt’ for his own power politics. That is also exactly what organized religion does — mainly in the West.

Swami Vivekananda simply says that the lion started sounding like a sheep and changed its food habits like the sheep. But that is biologically impossible. The movie elaborates on this and makes the guilt-ridden lion adapt the pop ’philosophy’ of 'Hakuna Matata' — where reality becomes linear and a kind of 'forget the past and live in the present' attitude is taken.

Soothing and comfortable as it is, such a philosophy nevertheless makes one forget the true Self. However comfortable such a life can be yet when the knowledge of the true Self dawns, ‘Hakuna Matata’ withers away and the lion returns to his home land’s battle field.

The current movie makes yet another significant change from the original when Nala, the lioness and childhood sweetheart of Simba goes to him but fails to make him realize who he is. Had the movie used the romantic love of Nala to make Simba regain his Self then it would have been a good romantic children’s story.

But where Nala fails, the Shaman Rafiki succeeds. Rafiki in fact plays the typical Guru and leads Simba through the path and makes him see his own reflection and realize his Self.

In the original animation, the dialogues that Simba has with the supernatural appearance of his father in the sky are filled with Vedantic flourish:

The following Hindu connection to the movie was left perhaps unconsciously by the makers of the original animated movie: the scene where Rafiki, the Shaman, learns of the existence of Simba and comes to him and leads him to Self-realization, Rafiki sits in Padmasana (lotus position) and with his fingers set in chinmudra or jnana mudra — the mudra or symbolic hand gesture for consciousness and wisdom. 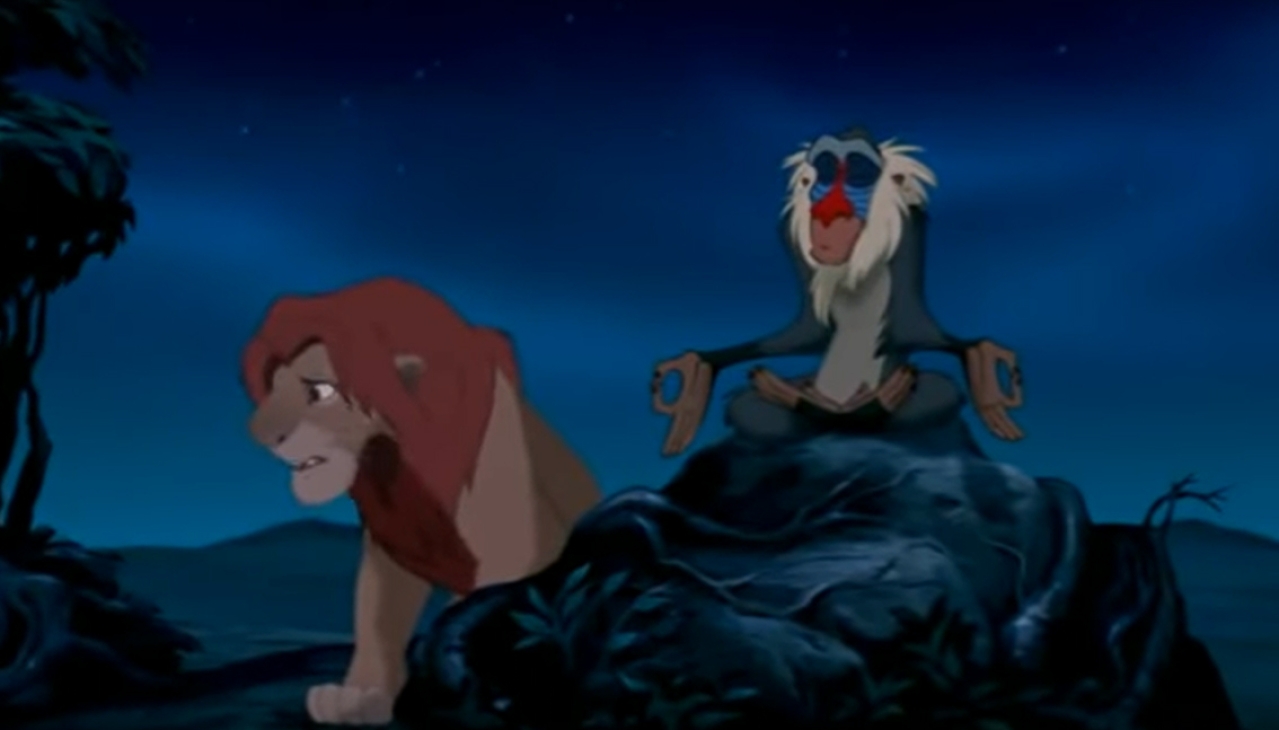 Rafiki the mandrill Shaman sitting in Padmasana with chinmudra — faint acknowledgement of the Hindu source?

After the discovery of his Self, Simba, the enlightened lion, did not retire into the seclusion of meditation or eloquently retire into spiritual grandeur. On the contrary, equipped with the knowledge of the Self, Simba returns from exile, fights the battle, and conquers what is rightfully his and earns his place in the ‘circle of life’ — and once again Hindus need not be told as to what this reminds them about.

Can we call this appropriation? This writer thinks not. Disney has done a great service to humanity through this film (of course, also profiting from it). The appeal of the movie across various cultures of humanity shows the universal nature of Vedanta.

Here it should be remembered that the lion plays an important role in Jewish culture. The ‘Lion of Judah’ is the symbol of the Israelite tribe of Judah and is the symbol of Jerusalem. Christian theological appropriation of the Lion of Judah (through Revelation 5:5), was used by the Christian fantasy writer C.S.Lewis in 'The Chronicles of Narnia' (1950-56) where the resurrected Lion (symbolizing Jesus) fights against a witch and her armies, a pagan-Christian clash.

In The Lion King, however, such appropriation and sectarian religious propaganda do not happen. On the contrary, a Vedantic core tale has been taken, improvised with great addition of color and music, and spiritual traditions of Africa, and transformed into a tale of Self discovery followed by action in a battle field to recover what has been lost.

The Lion King has taken Vedanta to children across cultures and nations. And the question we need to ask is not ‘how can they take our tale?’ but ‘why we did not do this?’

Get Swarajya in your inbox everyday. Subscribe here.
Tags:
605 Shares