The Pope and Extra-Terrestrials 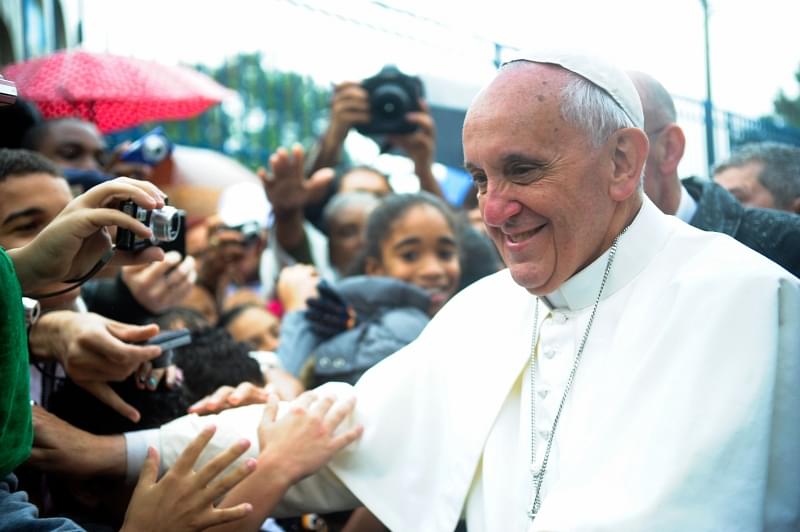 Suppose we make contact with ETs. Would Christian theology allow these aliens souls? Were the souls of the extra-terrestrial intelligent beings made in the image of a God worshiped in this pale blue dot? Should the souls of these ET too need to be saved?

All living creatures—human or otherwise—can go to heaven. Pope Francis was reported in the press to have made such a statement. But soon it turned out to be a sensationalist misreporting of his actual statement.

Pope Francis was also reported in May 2014 to have announced that he would be ready to baptize aliens. Even ‘the little green Martians’ had the right to be baptized, the Pope had declared. This too turned out to be another sensationalist misrepresentation.

The Bishop of Rome and the head of the Roman Catholic Church originally had made the statement in the form of a question:

“If tomorrow, for example, an expedition of Martians arrives—green men with a long nose and big ears, like children draw—and some of them come to us, and if one of them asks to be baptized, what would happen then?”

He was essentially making a comparison between the Martians and the Gentiles of the first century BCE. The Gentiles were as alien to the budding cult of Jewish Christianity as Martians would be to earthlings, still did they not baptize and was it not why the Church grew?

However, both the statements bring out a deeper problem that not only Roman Catholicism but all the expansionist Abrahamic monotheist religions have to struggle with. Is the soul unique to human beings?

Once it was thought that humans—more specifically white male specimens—were made in the image of God in a very literal sense. With more theological refinement, it is now assumed that it is the more elusive human soul that is fashioned in the image of God; so soul is unique to humans and that it is this soul that needs salvation which only the one Church, one Book or the only begotten son of God or the only revelation made to the one prophet can give.

With our astronomical probes becoming vaster and deeper, the probability of extra-terrestrial civilizations has been increasing. Suppose we do make a contact with one of these ETs. Then what happens to Christian theology?

Would the theology allow these aliens souls? Were the souls of the extra-terrestrial intelligent beings made in the image of a God worshiped in this pale blue dot? Science fiction writer Arthur C. Clarke ruthlessly attacked this human-centred visualization of a deity in the context of the vast grandeur of the cosmos:

“The rash assertion that ‘God made man in His own image’ is ticking like a time bomb at the foundations of many faiths, and as the hierarchy of the universe is disclosed to us, we may have to recognize this chilling truth: if there are any gods whose chief concern is man, they cannot be very important gods.”

If ETs can have their own planetary savior, then why not extend that possibility to the different geo-cultural zones of planet earth also?

It is not hard to see that such a theological adaptation on the part of expansionist Abrahamic religions would naturally come close to accepting the core concept of Avatar—the divine incarnating in different times and in different milieus in different forms.

Obviously, that soul was not put there by the Creator, hence it could not be a soul in the true sense of the term. So the machine has intelligence without a soul.

That sounds ominous if not downright evil. This may be the reason why most Hollywood movies (with notable exceptions which seem to be increasing) show intelligent robots and aliens as evil.

The equally intriguing Western response to the ET-contact anxiety also manifests in the techno-myths of UFOs and narratives of pseudo-scientific ancient aliens, popularized by The History Channel, with disgustingly huge commercial success.

The same problem extends to the canines as well as all non-human life forms. Christian theologians have consistently denied the soul to all non-human life. Of course, the soul referred to here is the Aristotelian conception of the soul which was further theologically refined by St. Augustine.

The conceptual evolution of soul and non-human life in Christian theology has to take into account St. Francis of Assisi. He empathized will all life forms—calling them ‘sister birds’, ‘brother wolf’ and ‘brother donkey’.It is said that the greatest miracle performed by the saint was that he escaped burning at the stake by inquisition.

Lynn White (Jr) in his famous essay The Historical Roots of Our Ecological Crisis traces ‘the Franciscan doctrine of the animal soul’ ‘possibly’ to Cathar heretics who ‘presumably had got it originally from India’.

In our own times Catholic theologian Thomas Merton, influenced by Hindu-Buddhist traditions, stated that Hagia Sophia (Holy Wisdom) flows through all existence.

Of course, theological hair-splitting arguments can be made that intelligence and even ‘holy’ wisdom flowing through beings need not mean they have ‘souls’.

The way Indic spiritual traditions have experienced the same ‘problems’ is very interesting and illuminating. His Holiness the Dalai Lama was asked if it is possible for an artificial system to ever become conscious and the answer was positive.

The smiling Tibetan Lama also stated that the very scientists who were working on the problem may be reborn as the system. So with a twinkle in his eyes he advised the scientists to try and make their conscious systems as nice as possible.

Hindu popular culture contains stories where the most noble emperor refused to enter heaven if a dog would not be allowed entry. Such stories which shaped Indian culture come from deeper spiritual-philosophical roots.

In the Indic context, we speak of Atman not as a non-physical ethereal soul but as an embedded, involuted and all enveloping intelligence—Arivu in Tamil. Kena Upanishad says of Brahman as being realized in ‘all cognitive pulsations of consciousness’ (pratibodhaviditham).

Ancient Tamil grammarian and seer Tholkappiar makes cognition the basis of the classification of life, For long, the scientific quest for life and consciousness has been limited by the framework of Aristotle-Augustine conception of soul and later Cartesian mind-body binary.

The conceptual shift to cognition-based definition of life can bring fresh new insights about and devise new approaches to both biology and consciousness-studies. The Santiago Theory of Cognition by Francisco Varela and Humberto Maturana is a milestone already happening in this direction.

It seems in dealing with the question of ET and animal ‘souls’ the Indics are better placed than the Church which finds itself tied up in knots trying to force-fit their theology onto the cosmos.