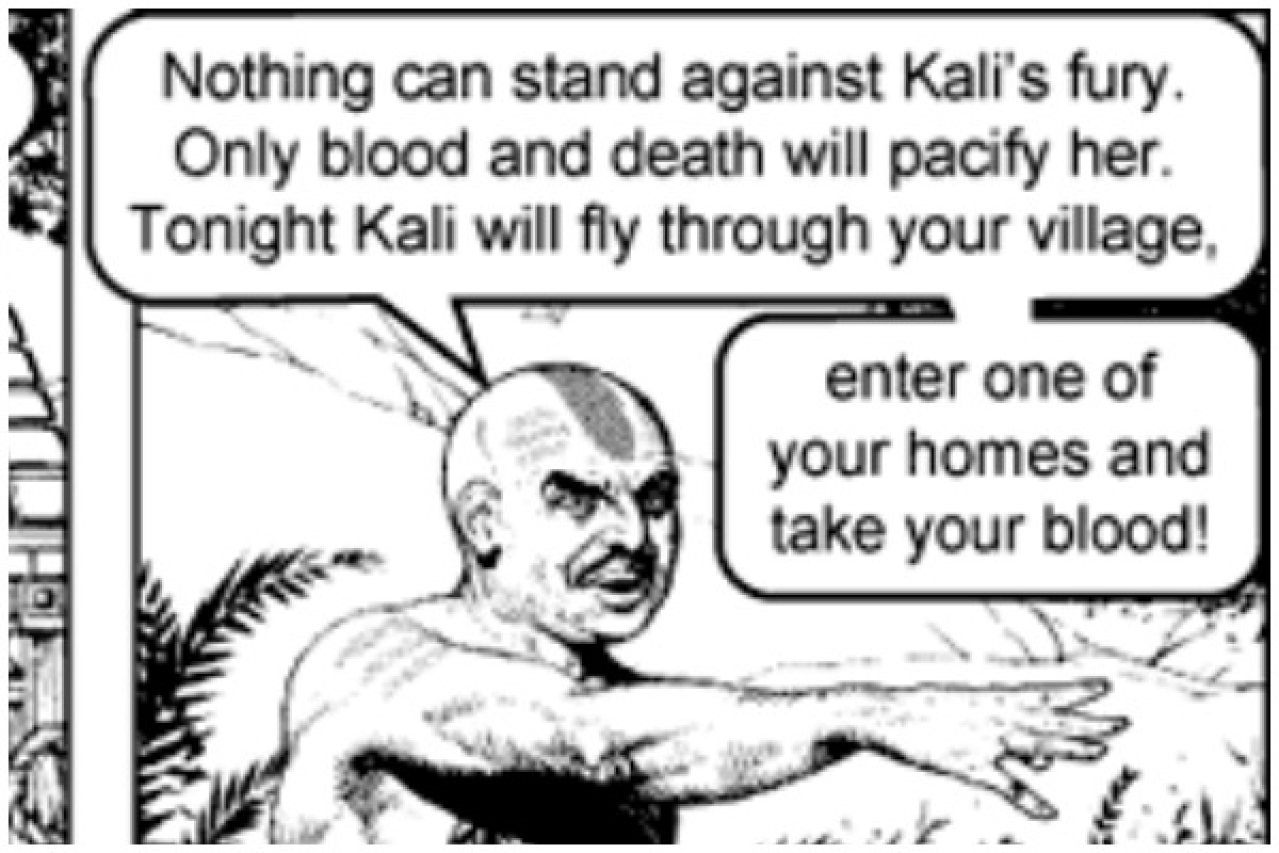 Western cartoonists contemptuously caricaturing Hindus is a phenomenon almost entirely ignored in India. But, it plays a significant part in determining how a large section of the Western populace views Hindus and Hinduism.

In this piece, we take a peek into the works of the very influential, and very radical, American cartoonist, Jack Chick.

Chick was a cartoonist who spread radical Evangelist ideas through his work–ideas which, for a significant number of evangelists, constitute the true and pure form of Christianity.

If you want to know the proverbial belly of the evangelical beast, then go no further than his cartoons.

But he reserved a special space of viciousness for Hindus. In his worldview, Hinduism was demon-filled to the brim and Indian priesthood served demons for its own selfish purpose of exploiting people.

Now, one would expect the ‘secular’ and ‘left liberal’ Western media to have a critical view of Jack Chick in their obituaries for him.

Here is what they highlighted and what they omitted and more importantly, what that says about their perception of attacks on Hindus and Hinduism:

Here are two obituaries – both from the Western ‘secular’ media:

The Guardian is considered a secular leftwing newspaper. Its obituary for Chick was written by Sam Theilman, who considers himself as one among the ‘white evangelical Christians’.

In the title itself, he crisply defines Chick as the 'Christian cartoonist who tried to save us from hell'.

The obituary is an exercise in eulogising a fundamentalist in 'secular' language. So 'there was no one else like him in the world' and even his 'harsh stories about the wages of sin were both inescapable and oddly inviting in the way of very few other methods of proselytizing', according to Thielman.

The entire criticism of his comics in the piece is summed up in these three lines and they deserve a careful reading:

A lot of people hated Jack Chick. He wrote furious screeds against Dungeons & Dragons, against Catholicism and against rock music; he waged a long and ultimately unsuccessful war on Halloween. If you were Jewish or Muslim or gay, Chick wanted you to be saved from the fires of hell and wrote a comic to tell you so.

Note that it is not Jack Chick who gets accused of hatred here but those who criticise him.

His hatred for the non-evangelist groups is instead rephrased: 'Chick wanted you to be saved from the fires of hell and wrote a comic to tell you so.'

Even while Theilman states the fact that Chick’s comics were outlawed 'at least once by the government of Canada’ for constituting ‘hate speech', he does it through the statement of 'the critic and New Yorker writer Daniel Raeburn’s magazine the Imp’.

What Theilman leaves out though is Daniel Raeburn’s more informed, secular and relevant evaluation of Chick:

People who dismiss hate literature offhand are going to miss the point of this tribute to Chick, which is that hate literature reveals not only its own corruption but the sick society that hatched it.... Like the Protestant zealots who colonized and raped this country, Chick tracts and the violence in them are as American as apple pie.

As we go through The Guardian’s obituary, we learn that this hate-peddler was adored by 'many underground and alternative comic artists' of the Western culture.

Theilman quotes cartoonist Daniel Clowes applauding the tracts as ‘really compelling and interesting’ and that he would ‘rather read these than pretty much anything else published in 1985.’

One cannot have more empathy for a fundamentalist hate peddler; or so one would think.

It is now the mother of all Western liberalism and appears to share with the late Jack Chick a special hatred for India – particularly Hindu India.

Its title for Chick’s obituary did not even consider the cartoonist controversial but calls him the ‘Cartoonist Whose Tracts Preached Salvation’.

Chick’s tracts are known for their hostile depiction of Muslims, too. There are at least 13 tracts of Chick specially designed for ‘reaching’ out to Muslims.

The tract, Unforgiven, shows a black youth getting converted to Islam in jail. When he completes his term and is released, he develops murderous rage towards his own non-Muslim family members.

In 2014, when these tracts were distributed by the Bible Baptist Church in Garden City, Roanoke, Virginia, the local Muslim community protested.

Oddly enough, without touching such offending tracts, The New York Times' obituary chooses a tract that depicts an innocent Muslim who gets converted to Christianity after being rescued from goons attacking him in the wake of 9/11, and being shown the ‘love of Jesus’.

Stereotypes of Violent Muslim versus Loving Christian: NYT prefers to highlight the latter

The obituary tries to whitewash the hatred Chick spread with an air of innocence. The obituary presents Jack Chick's hate list thus:

So, if you are in that hate list then it is not really a big deal. After all even if ‘some’ consider it as ‘religious pornography’, it is ‘the ultimate folk art.’

What should be noted here is that in both the obituaries they do not include Hinduism in the list of things Chick hated, even as they barely allude to his hatred.

How do Chick publications depict Hinduism?

While the number of tracts made by Chick on Hindus and Hinduism may not be high, the hatred revealed in each is especially pungent.

The more (in)famous ones include the black and white tract called Traitor.

Here, a Kali devotee sacrifices his own 'first-born son' to Kali while the Indian police inspector closes the case fearing the goddess.

The readers are also informed that 'this is a true story' that happened in 1982.

At last, the priest of Kali suffers defeat at the hands of the ‘peace-filled gaze of a Christian’. The Christian reveals that Satan created all the gods of India and that they were demons who would rob the soul and take one into hell.

Another example of Chick’s views on Hindus is found in a multi-coloured comic titled Exorcists, published by 'The Crusaders'.

Published in 1975, the book was clearly designed to run on the popular fundamentalist wave created by the movie Exorcist.

Of course, the St Thomas myth is also emphasised in this book.

Also read: The ‘Haaretz’ paradox: Why would an Israeli newspaper propagate the myth that St Thomas came to India and was killed by Hindu priests?

The story starts with two Hindu boys discovering a small vigraha of a deity. Soon after, one of them gets bitten by a poisonous snake and dies.

An American missionary, one Rev. Hayes, and the surviving boy, enter into a conversation about God and Satan, even as the missionary carries the dead boy's corpse to his house.

‘All Indian Gods are false Gods’

The missionary informs the Hindu boy that the gods of India 'are false gods because the devil is over all of them'.

The Hindu boy then decides to worship Satan as he is the master of all other Hindu gods.

The boy's father happens to be a Communist and when a Russian commissar visits their home, the boy behaves hysterically and is ‘possessed by the devil’.

A doctor in Calcutta recommends exorcism.

The communist father initially refuses but at last complies.

A Hindu priest heartlessly states that it was because of the boy’s karma in the previous birth that he is possessed now.

Another Hindu mendicant who comes to carry out the exorcism is revealed to be an old criminal by the devil himself.

Hindu priests are fatalistic, selfish, exploitative: Western academia and media would agree with Chick tracts in this hate stereotype.

Of course, eventually, the American Christian exorcists win and rescue the boy and the boy's family, including the Communist father, embraces Christianity.

One can see how the ‘comics’ play on both the colonial stereotypes—cultural constructs and political biases against the Hindus.

The Western as well as the Western-academic depiction of Hindus and Hinduism is not much different from what is there in the Chick comics.

The left-liberal ecosystem of the West is liberal only in relation to the extreme right of the West. With respect to the East in general, and Hinduism in particular, it is as right-wing as a Southern, Bible-thumping Christian would be.

That should also explain why Harvard University allowed the context-free use of a 1917 Gaganendranath Tagore cartoon, 'Millstone of Caste System’, that depicted Brahmins grinding hapless victims.

Internalising the colonial critique of the Hindu priest system created a self-hatred, particularly Brahmin-hatred, in India, and this 1917 cartoon was not unlike the antisemitic cartoons then proliferating in the pre-holocaust Christendom.

For Harvard University to use such a cartoon, or allow the use of it, reinforces the fact that when it comes to Hinduism, the Jack Chick hate tracts are very much part of not just the 'folk' Western culture but also the mainstream Western academia and media.

On this, there is no right and left divide.

Get Swarajya in your inbox everyday. Subscribe here.
Tags:
211 Shares