Venmurasu: A sublime literary masterpiece in the making 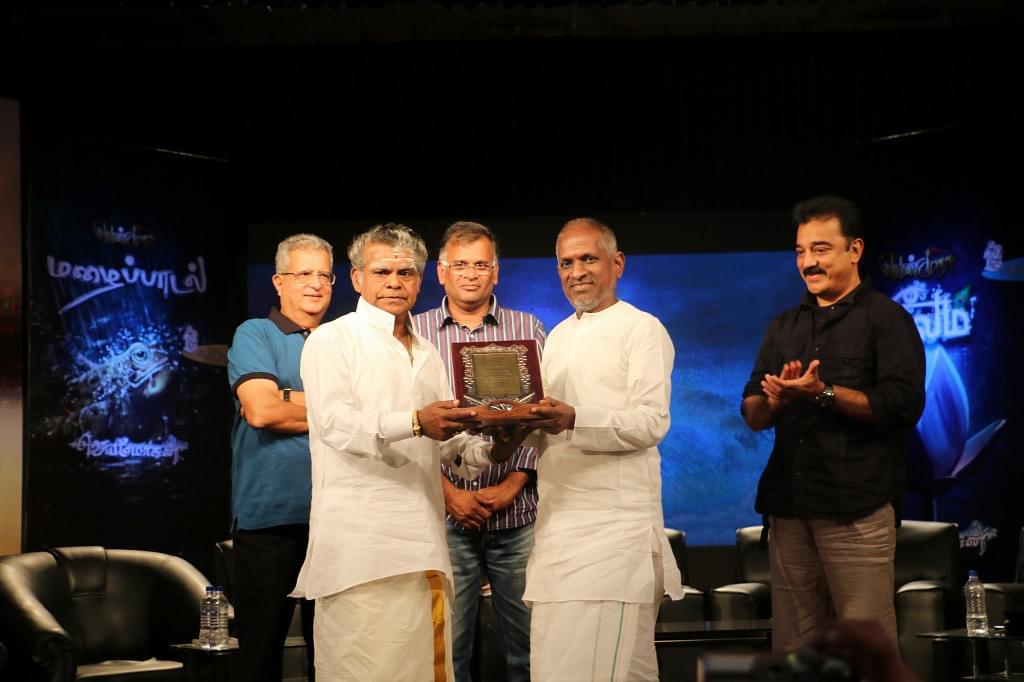 “Hovering the epic sky that Vyasa once soared,  even as a humble fly, is a lofty honour for every great Indian writer. But Jeyamohan spreads his wings in the same sky, not as a fly, but  as a mighty eagle,  raising to the same heights of Vyasa”, remarked writer P A Krishnan, while speaking at the event in which four Tamil Mahabharata novels authored by Jeyamohan last Sunday (9-Nov) in Chennai.

Jeyamohan is no small name for anyone familiar with contemporary Tamil literary world. Since 1987, the Nagercoil born writer has written over 10 novels, 11 volumes of short-stories and novellas, 26 books on criticisms, biographies, and numerous other non-fiction – a standing testimony to both the breadth and depth of his writings. Shaken by inner turmoil and the death of a close friend, and subsequent sudden suicides of his parents,  he left home at the young age and became a wanderer traveling all over India. These travels and nomadic lifestyle during the formative years have shaped all his subsequent writings.

Vishnupuram (1997), his first and most acclaimed of novels is a meta-fiction and a layered fantasy that spans across 800 years, various philosophical schools, traditions, arts and emotions. Pin Thodarum Nizhalin Kural (1999) is an inquiry into the nature and structure of ideology and accompanying political devices in unleashing destruction, written in the back drop of collapse of Soviet Union. Other well-known novels include Kaadu (2003), Eazhaam Ulagam (2003) and Kotravai (2005).

His short stories have won him the prestigious Katha Samman (1992) and Sanskriti Sammaan (1994) awards. His prose, rich in newer and newer metaphors, ever fresh and vibrant with its multi faceted hues and scents, is an eternal delight for the readers.  Being a prolific author, he regularly writes in his website and deeply interacts with his readers, enriching and contributing to the overall intellectual discourse in Tamil.

Starting 2014, Jeyamohan has undertaken a highly ambitious literary dream of his life, of writing the Mahabharata as a series of 25-30 novels, over the duration of 10 years. This novel series has been named Venmurasu (The White Drum), symbolizing pure white that represents the commingling of all nine Rasas, trumpeting the message of Dharma and Shanti.  The  individual chapters of every novel are continually getting published every day in his website (jeyamohan.in) and its mirror site (venmurasu.in). When this vision is realized, Venmurasu would very well be longest novel series in the history of world literature, going beyond 25,000 pages.

Over the past 10 months, four novels have unfolded. mudharkanal (The Foremost Fire) opens with the Great Snake Sacrifice and leads upto the birth of Dhritarashrta, Pandu and Vidura. mazhai paadal (The Rain Song), the second one  narrates the story up to the birth of Pandava and Kaurava princes. vannakkadal (The Sea of Colors) portrays their childhood, alongside the socio cultural churning in the Bharatavarsha of those times. Neelam (The Blue), fourth in the series  is a  distinct piece on the birth and boyhood of Krishna and the liberation of Mathura. Prayaagai (The Confluence), the fifth novel is running now.

Jeyamohan remarks that this endeavor fills him with twin emotions, of great elation and also of great humility, born out of climbing on the shoulders of the literary giants of the past, from Mahakavi Bhasa, the Sanskrit dramatist, all the way up to the likes of P K Balakrishnan (Malayalam) and S L Bhyrappa (Kannada) who wrote brilliant Mahabharata novels.

Beyond its mammoth size and duration, Venmurasu is distinct in its approach in  re-narrating and reinterpreting the timeless Bharata epic in many ways.

First, it is not just a retelling of the epic for the contemporary audience. The author uses Mahabharata as a vast  canvas to paint every shade of Indian thought. The novel’s narrative structure itself encapsulates the uniquely Indian aesthetics and artistic sensibilities. In doing this, the entire philosophical, cultural, and the geographic landscape of India gets deeply embedded into the readers’ psyche. Once complete, this will be as much of an encyclopedic work, as the original Mahabharata, a veritable storehouse and a reference for everything on Indian culture and knowledge systems in Tamil. Jeyamohan agrees that it is the technology and internet that is making such an endeavor possible and it would have been unimaginable for any writer to even dream of this two decades back  in the print and paper era.

Second, unlike many other contemporary renarrations, Venmurasu does not attempt to simply reduce, invert, negate, or transgress the original Mahabharata story. Neither does it try to side with one particular character, either in the spirit of “speaking for the victim or the repressed” or  at the expense of ignoring and sidelining other characters. Rather, the novels  fill the narrative gaps and expand upon the original story.  This is done in many ways, like establishing intense dramatic moments,  exploring the inner profile of even small characters, weaving multiple narratives of the same episode or incident in a coherent style, by the sheer poetry or the majesty of imagination.

Third, Venmurasu is written with the sensibilities of a contemporary novelist, living in times beyond post modernism and magical realism. The discerning readers would be thrilled and amazed to find the styles and shades of  Kalidasa and Kamban or Tolstoy and  Dostoevsky or Garcia Marquez and Roberto Bolaño, all of them and much more during their journey through these novels. While dealing with mythical and supernatural elements in the story, the novels employ a highly nuanced and sophisticated approach, neither rejecting them to make it totally realistic (like ‘Parva’), nor narrating them in the conventional  Puranic style. This quality makes these novels to stay earthly and at the same time not lose the ‘magic’ of the mythology.

“The  grandeur of what Jeyamohan  is attempting in his field, is much beyond what myself and Kamal Hassan have been accomplishing in our chosen fields” remarks  Music Maestro Ilayaraja.  Indeed an extraordinary admiration.

The book release event, graced by  Tamil literary legends like Ashokamitran and Nanjil Naadan and celebrities Kamal Hassan and Ilayaraja and a large number of enthusiastic readers was unprecedented, in a way.  Unusual in the sense that serious Tamil literature and its authors have never been celebrated in such grand popular events in Tamil Nadu in the past. Given the general cultural climate of Tamil Nadu, dominated by petty prejudices, ideological hate mongering of Dravidian and leftist camps, recognitions for the mediocre and insults to the truly deserving and  ‘mass’ Tamil cinema,  it is heartening to see such a buzz around this great literary phenomenon.

Only when Tamils honor and celebrate their truly deserving writers and artists, will national media and institutions like Jnanpith will take note. That is the lesson Tamils have to learn from the examples of neighboring Karnataka and Kerala in the cultural space.

Let us fervently hope that this trend sustains,  results in increased spread and sale of good Tamil books and quality translations of Tamil authors’ great works into English and other Indian languages. May this literary Magnum Opus herald a golden era for modern Tamil literature.