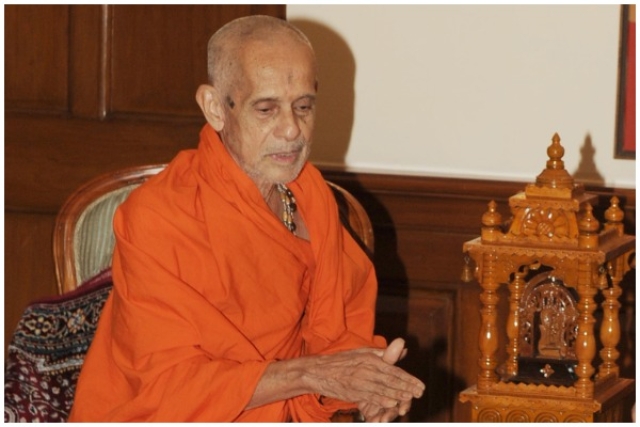 A beacon of light that guided society in the practice of Dharma is no more.

The swamiji of Udupi Pejavar Mutt, Vishvesha Thirtha, born in 1931, would have been 89 on 27 April 2020, but is not amongst us anymore. He was physically frail, but known for his tremendous internal strength and character, a rare quality these days.

This temple town of Udupi, which is also acknowledged as the world headquarters of the Dwaita philosophy, may seldom come across another name that has taken its ethos to such dizzying heights.

Born to Narayanacharya and Kamalamma in Ramakunja, a remote village in Puttur taluk, with a pre-sanyasa  name Venkataramana, Vishvesha Thirtha was ordained into sanyasa on 3 December 1938 at Chakrathartha in Hampi district by Vishwamanya Thirtha, the head of of the Pejavar Mutt when he was just 8 years old.

He has since steered Pejavar Mutt for eight decades, right from his first ‘Paryaya’ (the biennial alternating right to administrate the Krishna temple) in 1952.

This had put Vishvesha Thirtha on the centre stage of promoting Dwaita philosophy.

“That was a test for him to prove his knowledge in the various assemblies of scholars of not just Hinduism but also the congregation of multi-religious scholars on various subjects. He brought in a new dimension to the practice of Dharma through his arguments, which have been accepted by many of his critics,” says a senior Vedic scholar, Vedavyasacharya of Udupi, who had been with him for three Paryaya periods.

Vishvesha Thirtha Swamiji was the thirty-second head of the Pejavar Mutt and had undergone training in Madhwaradhantha under the tutelage of Vidyamanya Thirtha of Phalimar Mutt.

Vidyamanya Thirtha Swamiji taught all the shastras to the young Yati for eight years and helped transform him into a knowledgeable and erudite scholar of Vedanta. Swamiji quickly became an extraordinary scholar in Nyaya, Vedanta and other branches of philosophy.

Vishvesha Thirtha had put these philosophies into practice by using them to improve the social fabric of society too.

From the beginning of his second Paryaya period, he had propagated the entry of Dalits into the Krishna temple, which left the hardliners red-faced.

This also created enemies for him within the All India Madhwa Maha Mandala.

But when he went to Bengaluru and addressed the Mandala members and core committees, they understood how and why Swamiji was taking such steps.

“Dalits are a part of Hindu society. By disconnecting them from the religious segment we will be alienating a sizeable portion of our people, which was not just a crime against our own people but the will of god too,” he had said, recalls an elderly member of the Mandala who requested anonymity.

“Swamiji was a great strategist. In a way, I felt he created problems and found solutions to them as well. He always made controversial statements and created friction but provided solutions too. In the case of Dalits’ entry to the temple, the observation of Kanaka Jayanti in Udupi,  introducing Yede Snana instead of Made Snana at the Subramanya temple were some of the classic examples of his high thinking,” said the elderly member.

“In the case of Kanaka Jayanti, the All Karnataka Kurubara Sangha had stormed Udupi and wanted the apology of the Swamijis of the Ashtamutts, but Vishvesha Thirtha showed them Udupi’s culture of treating all communities equally and satisfied the Kuruba leaders that they were not discriminated against at the Krishna temple in any way,” says his ardent follower Pradeep Kumar Kalkura.

He took the revolutionary decision of allowing the Muslim fraternity into the temple and offering them Iftar at the Krishna temple’s dining hall and allowed them to do Namaaz too.

This had electrified the Muslim and Hindu communities alike, which was followed by another round of pro-and anti-sentiments against the Swamiji.

Many Hindu scholars even called him ‘senile’ but as usual, at the end of it all, he could forge a Hindu-Muslim friendship like never before in the history of not just Udupi, but also of Karnataka state, says Rahim Uchil, a Muslim leader.

This even created ‘ripples of trust’ among the two communities, even among the hardliners in the Muslim community.

His engagements on dialectic and argumental sessions with the scholars had left an indelible effect on his opponents.

His mentor, Sri Vidya Manya Thirtha Swamiji, had acknowledged this in the confluence of Ashtamutt Swamijis more than once, which had won more friends and enemies for the Swamiji.

But in the end, everybody were left admiring this knowledge.

His debates on various social and religious issues with Tiruvari Vijayeendraacharya and Sri Mysore Ramachandra Shastri of Mysore were legendary.

He also became the president of the Aagamathrya Conference when he was only 25 years old — the youngest among the Indian swamijis to occupy that chair.

His statement: “If God is not in our hearts, we will become like the ruined temples of Hampi” at the conference organised by the Maharaja of Mysore in Nanjangud had enthralled scholars and the general assembly of members at the conference, including the courtiers of the Mysore Mahasamsthanam.

“Hindavaha Sodaraaha Sarve Na Hinduhu Patito Bhaveth” — This statement by the swamiji in his second Paryaya in 1968 had echoed in North India across the spectrum of religious faiths.

He had understood the complexities of learning the basic tenets of Hinduism and wanted that to be a sustained effort through education, deliberation and exchange.

This made him start the Poornaprajna Gurukula in Bengaluru in 1956. He founded it with the sole aim of preservation of the culture of education based on the propagation of philosophy.

The Vidyapeetha is contributing hundreds of scholars and Yagnikas every year, thereby ensuring that the stream of Tattvavada scholars was constantly replenished.

Over 300 scholars are now scaling the heights of classical knowledge of Indian Philosophy.

He was the first Swamiji to consider Dalits as an integral part of Hindu society. While his quest to reach out to the Dalits had been dubbed a ‘political move’ by political parties, he believed his efforts were to wipe out the idea of untouchability.

This led to a social churn. He even wanted to offer diksha to the Dalits who wanted to learn Hindu philosophy deeply.

One of the recipients of this diksha was Uma Bharati, the hardline Hindu leader.

Swamiji even visited a Dalit colony in Meenakshipuram area of Tamil Nadu, which then shut down the voices of his detractors.

Swamiji’s various acts of charity had been in the field of disaster-struck areas as well. In 1975, when the district of Gulbarga in Karnataka had a severe bout of famine, he rushed there with his trusted workers and his very presence whipped up a massive inflow of relief material and men.

The  Hamsaladivi poverty-stricken area of Andhra Pradesh, the Latur earthquake, the Tsunami of Tamil Nadu, Koyna and Gujarat earthquakes, and many other big and small disasters have seen the Swamiji rising to the occasion for relief work.