What The Silapatikaram Reveals About The Society Which Produced It 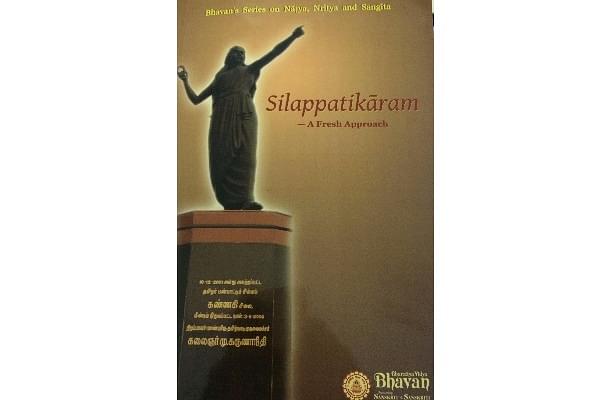 Silapatikaram is a pre-eminent Tamil kavya that gives a detailed account of life in South India some 1,800 to 2,000 years before present (ybp). Many tomes have been written since the rediscovery of this then lost work by U Ve Swaminatha Aiyer. It is highly important to note that it was him, again, who rediscovered the other two available Tamil kavyas, Manimekhalai and Jeevaka-chintamani. Another two of the five known Tamil kavyas are yet to be discovered. This perhaps attests to the vacuous nature of the claim of service to Tamil by the Dravidian leaders and puts to mockery their anti-Brahmin rhetoric.

Sadly, despite its relatively simple and unambiguous Tamil, many scholars of Dravidian movement and proselytising (Christian) persuasions have somewhat successfully tried to twist the interpretation of the work by removing the many overt Hindu-Vedic features of this great kavya.

Such machinations of the ‘Breaking India’ forces have been challenged once again by this extraordinary scholarly publication by Bharatiya Vidya Bhavan, under the editorship of Dr Nagaswamy and Dr Bharat Gupt.

This is one of those rare works which is so heavy in content and import that each chapter needs to be reviewed separately. This book review is thus a grossly inadequate attempt to try to capture the gravity of the entire publication in such a short piece. Even the preface on its own is a scholarly piece shedding pearls of facts and wisdom. For example, the editor, Dr Gupt aptly points out how the South Indians “are fond of music and dance more than any other people in the country” as observed even by Bharata in his work Natyashastra.

Again, in the preface, Dr Nagaswamy points out various facts as follows:

Beautifully interwoven are the presentation of various points even at the stage of the preface, such as the connection between this great kavya, architecture in Cambodia and Natyashastra, as described in the epigraphy found at Bantai Srei temple.

The Vedic wedding and the Hindu pantheon of Gods

We can see how the wedding of the lead characters of the story are conducted in accordance with the Vedic rites, followed even to this day by most Hindus. Importantly, neither of the parents – the bride’s or the bridegroom’s – appear to be Vedic by faith. They belonged to the Jainas, Ajivika sect or Buddhists. Yet, their wedding rituals and religious festivals are of Vedic Hinduism. This reflects the secularism inherent in the Dharmic cultures, sects and philosophies of Hindustan, a clear contrast to the lack of inherent secularism in the non-Dharmic exclusivist faiths imported into India now. This attests to the fact that intolerance by Hindus or Hinduism, historically speaking and as it is now made out to be, is an utterly false bogey. Manimekhalai, the daughter of Kovalan and Madhavi, is named after the family deity (kula devata) of Kovalan.

Instead of being proud of such an unbroken lineage of culture and heritage, what we have today are the raucous ignorant rants of the Dravidian political rhetorics. Clearly this book and works such as this will expose the hollowness of such divisive tactics.

The kavya explains how the Chera King who took upon a military expedition to the Himalayas prayed to Bhagawan Shiva, and got charms (garlands and such) from Bhagawan Vishnu’s temple before his expedition. The military expedition included artiste and musicians, which attests to the highly civilised nature of warfare in ancient Bharat.

The chief gods of Tamils, as per this great kavya, were Krishna, Murugan, Shiva, Durga, Indra, Balarama, Varuna, etc. It is not only the presence of these gods, but the stories and myths associated with them were the same as found in the Puranas and the Vedas. For example, the very common Devi worship (till date) also included the belief that she was the destroyer of Mahishasura. The kavya itself concludes with the Chera king conducting a Rajasuya Yagna, an undisputed Vedic ritual prescribed for the kings.

Temples are a salient feature of architectural and cultural description in this kavya. This refutes the common claim that temples are of Pallava origin and later. In fact, we find mentions of Chidambaram temple, Sri Rangam temple, Thirupathi temple and so on.

Similarly, castes and varna are squarely refuted in the kavya which explains how all the four Varnas were placed equally in the viewing arena and how all their respective Varna Bhutas were worshipped at the start of a concert. In fact, the bamboo pillars holding up the stage for performance were labelled with the names of all four Varnas putting all people on an equal ranking and respect. This also symbolised the importance of all groups of people for a smooth functioning of the society.

Geographical spread of the Chera territory

The territory of Cheran Senguttuvan appears to include the present-day north-west India (land of the Yavanas) and the northern plains, up to the Himalayas. This is attested by his title Imayavaramban, the one who has the Himalayas as his borders. In fact, the military expedition to the Himalayas appears to have been also to ascertain his suzerainty over the territories. The rule of the Chera was in no way autocratic. He is advised by an expansive council of ministers representing different classes and communities, and in which the queen is an equal participant. Many of the leaders and leader-like characters of the kavya are women. Thus, ancient India, before the alien invasions, was an egalitarian society and culture with a high degree of women empowerment.

Interestingly, the dancing girls were considered of a class of divine origin and of one of the highest births. Silapatikaram and Natyashastra share the same respect and status of divinity for the dancing classes. In fact, all the different dances derive from the Gods themselves. In fact, Natyashastra is considered the fifth Veda. Thus, the later degradation of the Devadasi system of dancing girls seems to be problematic. There is also evidence for entire Vedic Brahmin villages becoming dance/art classes (communities) and dedicating themselves to the arts of divine expression. Some such communities and villages are still in existence in Kerala. They follow Natyashastra to the last dot even in today’s performance.

Make in India by Sangam Tamils

The Chola king’s simhasana was made by various artists from all over Bharat: Tamil artists along with carpenters from Northwest India, blacksmiths from Avanti (western Madhya Pradesh), smiths from Maharashtra, stonecutters from Magadha (Bihar, Jarkhand, Bengal and Orrisa). The Chera king's hall was adorned with gifts such as the royal canopy from Vajra King, pattimandapa by the Magada king, torana by Avanti king. Cf. Perunkatai.

Clearly, Bharatiya society was integrated from the north, northwest, northeast to the tip of the southern coast.

At the same time, if we do not actively learn about our own cultural treasures and literature, it will be hijacked by ‘Breaking India’ forces and misrepresented by devious thugs masquerading as protectors of the society. So let us attempt to re-educate ourselves with the help of works such as this and do our bit for the reemergence of truth.