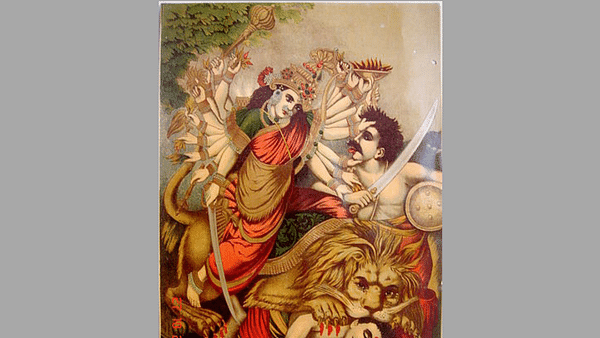 Durga Mahishasura-mardini, the slayer of the buffalo demon. (

While Navratri is in full swing, an indirect assault on the festival is almost certain, usually by a peripheral and inconsequential element of the ‘mulnivasi’ Dalit cause, which is increasingly appropriating the racial justice movement.

Last year, it was the Mahishasur Martyrdom Divas celebration that rocked the Parliament. This year, professor Kedar Kumar Mandal of the Delhi University was behind a derogatory Facebook post on goddess Durga, perhaps in an attempt to initiate the slanderous annual propaganda against the Hindu deity. However, it lost steam and ended in a comic relief when the atrocious spelling errors that the professor committed in the post drew attention rather than the post, and which also provided fodder for anti-reservationists.

The ‘mulnivasi’ theory speculates a foreign origin for the fair-skinned Aryan invaders who besieged and subjugated a civilisation of dark-skinned subalterns and created the ‘caste system’ to keep them suppressed. This is just a theory – one that has conflicting assumptions and also a lack of conclusive evidence. Now, there is no denying that the narratives of victors demonise the vanquished, or that history is purely the history of conquerors. But the fact that an inconclusive theory is the breeding ground for illogical self-victimising narratives fed with a militant zeal is not only mind-boggling but in defiance of rational intelligence.

Round Table India is an excellent platform that showcases the best Dalit Voices and two of their own well-written articles on the matter explain how certain tribal or subaltern groups have a different narrative. Here, one is forced to reiterate that we are talking about mythology, not history. There is no archaeological or historical evidence of this myth that validates either that Durga killed Mahishasur in a fair war or by unfair means. The mainstream narrative is that the goddess defeated an army of demons in war, culminating in the death of their chieftain, Mahishasur.

Anyone who has an inkling of yogic or ayurvedic training knows that this is an allegory of the kundalini shakti destroying the base Tamasic instincts and emerging victorious over inertia, dullness and lethargy, of which a buffalo is a perfect, living example. Leave it to irrational fringe elements that have created a narrative of victimisation based upon an inconclusive geopolitical theory to support their imaginary and continued oppression by turning this myth on its head.

As a feminist, I waited for three years hoping either savarna (the four major varnas) or avarna (castes that do not belong to the four major varnas)/Dalit feminists to notice one glaring inconsistency in this speculative, alternate theory of supposed historical mythology. And they have all failed spectacularly.

What do men do when confronted by women who surpass them?

A Dalit security guard was fired from our residential complex in Mumbai four years ago for calling my housemaid a wh*re. When the girl confronted him, he told her she was entering homes to work and that did away with any right she had for respect from men. My maid (Yes, I just checked my privilege. No, I am not a Hindu.) was Dalit too, who cried on my lap as I told her that her acceptance into my home and flourishing financial status as she worked in multiple homes had threatened his machismo and he resorted to using the only weapon men have against women who race past them by calling her what he did.

The first action of Thutmose III as Pharaoh was to erase all hieroglyphic and archaeological evidence of his relative and predecessor Queen Hatshepsut from history. His own son would usurp many of Hatshepsut’s accomplishments. History is littered with men erasing, demonising and defacing the legacy of women who are conquerors, victors and queens. And here we have a war of mythologies where one group is attempting to erase, deface and discredit the tale of a female victor by calling her a ‘prostitute’.

From the premise that prostitution is wrong to the premise that a woman can’t beat a man fair and square except by using her sexuality and body – this is the propaganda against which a feminist discourse has to be built.

No feminist worth her name could be intellectually blind to see this truth. They can however pretend to disagree because asserting that an oppressed group is wrong would imply their oppression is challenged. If only the world was black and white. It isn’t, nor does class oppression entitle any group to practise misogyny.

Black men are called out by black feminists for their misogyny and lack of solidarity more than anything else. Do we have Dalit/avarna or savarna feminists mirroring that, while they are mirroring and appropriating black social justice theories en masse?

Indian feminism is languishing, tired and bereft of solidarity because its very principles are compromised in the name of intersectionality (a concept often used in critical theories to describe the ways in which oppressive institutions are interconnected and cannot be examined separately from one another). Making room for misogyny because class or race oppression are deemed higher than gender oppression is laughable.

Misogyny is misogyny no matter what the colour of the skin or caste of the perpetrator is. Indian feminists need only to see the situation in the West to understand how identity politics and intersectionality have cost the world, and everyone, from New York Times to the Mic, is abandoning this rainbow ship that promotes cannibalisation among and of feminist and gender issues – before it’s too late.

Shefali Samdaria is an agnostic feminist and a writer currently based in New York.