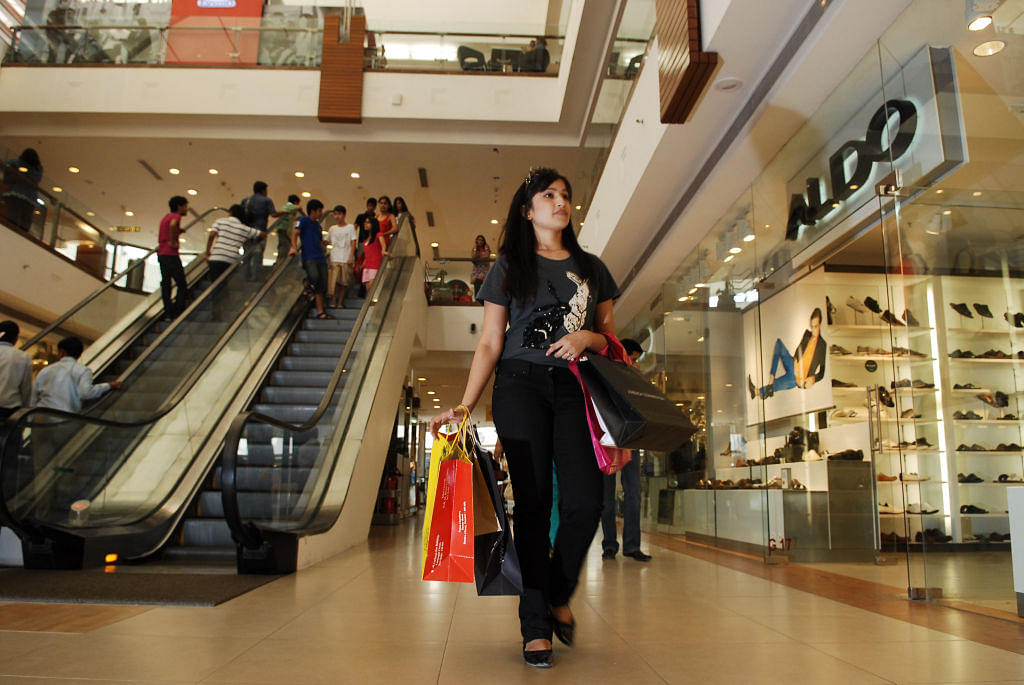 An inside view of a mall in New Delhi ...  100 per cent FDI in single brand retail a big boost for businesses. (Pradeep Gaur/Mint via GettyImages)

Reforms Push: Cabinet Clears 100 Per Cent FDI In Single-Brand Retail: The Union government on Wednesday allowed overseas investors to make 100 per cent foreign direct investment (FDI) in single-brand retail trading and construction development without any government approval. It also approved changes in FDI norms to allow foreign airlines to own 49 per cent in Air India under the approval route. However, two conditions have been set: The foreign investment, including that of foreign Airline (s), shall not exceed 49 per cent either directly or indirectly and “substantial ownership and effective control of Air India shall continue to be vested in Indian National,” the government said. The decisions would help provide ease of doing business and also lead to larger FDI inflows contributing to growth of investment, income and employment, it said. Real estate broking service does not amount to real estate business and is, therefore, eligible for 100 per cent FDI under the automatic route.

Anti-Sikh Riots: SC Reopens 186 Cases, SIT To Monitor Probe: The Supreme Court on Wednesday ordered the constitution of a three-member Special Investigation Team (SIT) to relook 186 cases related to the 1984 anti-Sikh riots that followed Indira Gandhi's assassination. The new SIT, which the apex court said will be headed by a retired high court judge and include one serving and one retired IPS officer, will examine whether any of these 186 cases merit reopening. The Supreme Court's action comes after a supervisory committee of retired justices K P S Radhakrishnan and J M Panchal submitted a report saying that out of the 293 cases from the anti-Sikh riots, 186 cases were closed by the original SIT without investigation. The new SIT will re-examine these 186 cases and give recommendations on whether they can be reopened and whether a chargesheet can be filed. The anti-Sikh riots, which continued for three days after Gandhi's death, rocked the country and have dominated India's mainstream discourse for years. The riots had claimed the lives of nearly 3,000 people.

K Sivan Named New ISRO Chairman: Eminent scientist K Sivan was on Wednesday appointed as the new Chairman of Indian Space Research Organisation (ISRO). Sivan, popularly known as the Rocket Man of ISRO, is currently the Director of The Vikram Sarabhai Space Centre (VSSC) in Thiruvananthapuram. Tenure of current Chairman Kiran Kumar is coming to an end on 14 January. It was Sivan's expertise that gave ISRO the ability to send 104 satellites in a single mission, setting a world record in February last year. He was the key person who worked on the technicalities of how the satellites would be placed in orbit. He graduated from Madras Institute of Technology in aeronautical engineering in 1980 and completed Master of Engineering in Aerospace engineering from IISc, Bangalore in 1982. Subsequently, he completed his PhD in Aerospace engineering from IIT Bombay in 2006.

Triple Talaq: Government May Take Ordinance Route: After having failed to cobble up enough support in the Rajya Sabha to pass legislation banning instant triple talaq, the Union government is likely to take the ordinance route to criminalise it. The bill to criminalise talaq-e-biddat was passed by the Lok Sabha in the winter session but is stuck in the Rajya Sabha with opposition parties as well as National Democratic Alliance partner Telugu Desam Party having reservations over criminal provisions in the draft law. A section of MPs in the upper House had demanded that the bill be referred to a parliamentary committee for review. According to sources, the government is looking at all options, including bringing an ordinance and convening a joint session of Parliament during the budget session to get the legislation passed without having to go through the Rajya Sabha, where the bill faces formidable opposition hurdles.

Salaries To Grow By 10 Per Cent Across Industries In 2018: Survey: In what could be considered good news for job-seekers, 55 per cent of Indian companies are looking to increase their headcount this year. Organisations are expected to increase salaries by 10 per cent across industries and career levels in 2018, according to a survey. “Indian industry continues to project low double-digit increases, driven by a combination of an optimistic economic environment and a scarcity of the right talent," said Shanthi Naresh, India business leader, talent consulting and information solutions, Mercer, which released Mercer’s 2017 India Total Remuneration Survey. In 2018, one in two companies are planning to increase headcount, with shared services and hi-tech leading the pack, similar to what was seen in the past two years. Naresh said that the Indian hi-tech market is undergoing a tremendous change and disruption due to changing nature of jobs.

Release Of ‘Padmavat’: Karni Sena Warns Of ‘Public Curfew’: The Rajput body protesting against Sanjay Leela Bhansali's Padmavati – retitled Padmavat – issued a 'warning' on Wednesday, saying it would impose a 'janata (people's) curfew' if the film is released in India. Rajput Karni Sena chief Lokendra Singh Kalvi said any theatre screening the Deepika Padukone-starrer would face "detrimental consequences". "We cannot allow our invaluable legacy to be ruined because of the film as it brings disgrace to Rani Padmavati and is an attack on Rajput pride. It presents distorted facts and threatens to shake India's cultural identity... We will impose a janata curfew if it releases," Kalvi said. He added that there can be no compromise on the issue. Kalvi said 'janata curfew' would be a peaceful protest against the screening of the film in theatres across the country. He claimed there were enough volunteers to do so.

Hafiz Saeed Incited Jihad In Tour Of British Mosques In 1990s: BBC Report: Alleged Mumbai terror attack mastermind and Jamaat-ud-Dawa chief Hafiz Saeed, one of the world’s most-wanted terrorists, had toured UK in the 1990s to incite jihad, a BBC investigation has revealed. The report tracks Saeed’s visit to the mosques in the country urging his audience to “rise up for jihad”. According to the BBC Radio 4 documentary The Dawn of British Jihad, Saeed has been documented as ‘talking non-stop about jihad, encouraging British Muslims to join him,’ said Sajid Iqbal, one of the producers of the programme to BBC Scotland. During his visit in Glasgow, Saeed addressed a large gathering at the Central Mosque and claimed that billions of dollars have been used to ‘kill the spirit of jihad or Holy War’. “They are trying to entice Muslims to the politics of power through democracy. They are also using the interest-based economy to keep Muslims in debt,” Saeed is claimed to have told his audience as per the documentary.

By Denying River Water Data To Us, Beijing Is Using The Resource As A Tool Of Coercive Diplomacy: China has bragged about its hydrological-data sharing accords. Yet it showed in 2017 that it can breach these accords at will. The denial of hydrological data to India actually underscores how China is using transboundary water as a tool of coercive diplomacy.

The Bamboo Curtain: The Indian Forest Act (IFA) of 1927 has recently been amended, formalising what was initially done through an ordinance. Amending IFA to have it classified as a grass is a welcome step. But there is still clutter and contradiction in India’s forest laws.

Two Borders, Two Disputes: While India-Pakistan shooting matches continue along the clearly-demarcated Line of Control, the last shot was fired 50 years ago on the far less well-defined Line of Actual Control with China.

Why Vairamuthu Gets It Wrong About Aandal: By undermining the spiritual grandeur of Aandal, Vairamuthu has only revealed his shallow understanding of Tamil social history. It is critical to understand why Aandal is being targeted this way by those posing as intellectuals.