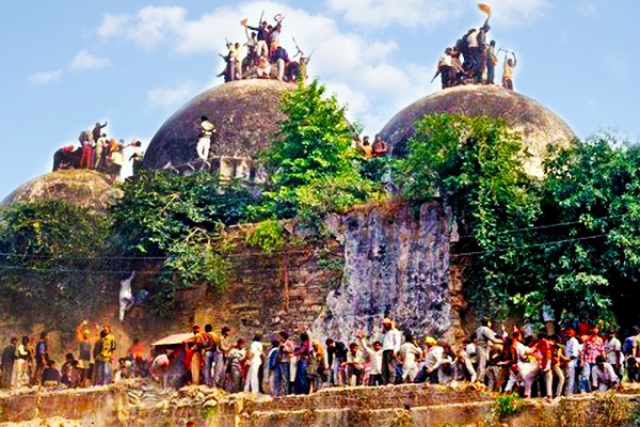 Kar sewaks on top of the disputed structure in Ayodhya.

SC To Start Final Hearing In Ayodhya Dispute: One the eve of the 25th anniversary of the Babri Masjid demolition in Ayodhya on 6 December 1992, the Supreme Court of India is set to begin final hearing in the Babri Masjid-Ram temple dispute case. A special bench of Chief Justice Dipak Misra, Justice Ashok Bhushan and Justice S Abdul Nazeer will assemble at 2pm on 5 December, Tuesday, to begin hearing a total of 13 appeals filed against the 2010 judgement of the Allahabad High Court in four civil suits. A three-judge bench of the Allahabad High Court, in a 2:1 majority ruling, had said the land be partitioned equally among three parties — the Sunni Waqf Board, the Nirmohi Akhara and Ram Lalla. A battery of high profile lawyers including senior advocates K Parasaran and C S Vaidyanathan and advocate Saurabh Shamsheri will appear for Lord Ram Lalla, the deity, and Additional Solicitor General Tushar Mehta will represent the Uttar Pradesh government. Senior advocates Kapil Sibal, Anoop George Chaudhari, Rajeev Dhavan and Sushil Jain will represent other parties including All India Sunni Waqf Board and Nirmohi Akhara.

Cyclone Ockhi: Mumbai Put On High Alert: After wreaking much havoc in south India, Cyclone Ockhi is now triggering heavy rainfall in north Konkan and north Madhya Maharashtra. The Maharashtra government has declared a holiday for schools and colleges in Mumbai and adjoining districts tomorrow due to "serious weather predictions" in view of Cyclone Ockhi. An official at the Mumbai office of India Meteorological Department said on account of the cyclone, the megapolis has started receiving rainfall due to spread of clouds. The disaster management unit of Brihanmumbai Municipal Corporation has issued an advisory against visiting beaches in view of the high tide alert issued for tomorrow (Tuesday) morning due to the cyclone. The weather bureau has for Tuesday issued a heavy rainfall warning for Mumbai, Thane, Palghar and Raigad districts in north Konkan, Nandurbar, Dhule, Nasik and Jalgaon districts in north Madhya Maharashtra.

Rajya Sabha: Sharad Yadav and Ali Anwar Disqualified: Rebel Janata Dal (United) leaders Sharad Yadav and Ali Anwar have been disqualified from Rajya Sabha, the party's leader in the upper house, R C P Singh said in a Facebook post. The two rebel JD(U) leaders were expelled from Rajya Sabha by chairman Venkaiah Naidu on the basis of a petition filed by the party. Sharad Yadav has been at loggerheads with party boss and Bihar Chief Minister Nitish Kumar ever since the latter broke ranks with the JD(U)-Rashtriya Janata Dal (RJD) mahagathbandhan and partnered with the Bharatiya Janata Party in Patna in July. Recently Sharad Yadav, backed by other opposition leaders claimed the JD(U) headed by Nitish Kumar was not the real JD(U) and he approached the Election Commission, staking claim to the party and its symbol. The commission, however, refused to recognise the Sharad faction as the real JD(U).

India Allows 1,300 Buddhists From Myanmar To Enter Mizoram: The Indian government has allowed more than 1,300 tribal Buddhist refugees from Myanmar’s Rakhine region to enter Mizoram. The refugees left their homeland because of the ongoing war between the Myanmarese Army and the Arakan Army. This comes nearly a month after the Union Home Ministry had directed the northeastern states to take strict measures to prevent Rohingyas from entering Indian territory despite persecution by the Myanmar regime. The new group of refugees, belonging to the Chin and few other communities of Myanmar, has come to four villages in Lawngtlai district. According to the state administration, the refugees are being taken care of on humanitarian grounds as all of them came to escape clashes back home.

Growth Forecast Trimmed: Fitch Ratings on Monday cut India’s gross domestic growth (GDP) forecast for the current fiscal to 6.7 per cent from the earlier projected 6.9 per cent, saying the rebound was weaker than expected. It also cut GDP growth forecast for 2018-19 fiscal year to 7.3 per cent from 7.4 per cent predicted in its September Global Economic Outlook (GEO). Fitch, however, expects GDP growth to pick up in the next two years on back of gradual implementation of the structural reform agenda and higher real disposable income. "The Indian economy picked up in the third quarter (July-September), with GDP growing by 6.3 per cent year-on-year, up from 5.7 per cent in the second quarter. However, the rebound was weaker than we expected, and we have reduced our growth forecast for the fiscal year to end-March 2018 (FY18) to 6.7 per cent from 6.9 per cent in the September GEO," Fitch said in its latest GEO.

Brexit In Limbo: Britain and the European Union (EU) failed to strike a Brexit divorce deal during talks in Brussels on Monday after Northern Ireland’s hardline unionists rejected Theresa May’s agreement to potentially keep the province aligned with EU law after Brexit. However, the British and EU leaders said they were "confident" of reaching an accord later this week. The British Prime Minister and European Commission President Jean-Claude Juncker fell short of a breakthrough, despite encouraging progress on the thorny issue of the Irish border. The EU says Britain must make sufficient progress on key divorce issues — Ireland, Britain's financial bill for leaving the bloc, and the rights of EU nationals in Britain — to allow the opening of trade and transition talks at a summit on 15 December. Juncker, a former Luxembourg prime minister, said May was a "tough negotiator and not an easy one." May said differences remained on a "couple of issues". "But we will reconvene before the end of the week, and I am also confident we will conclude this positively," May said.

Former Yemen President Ali Abdullah Saleh Killed In Houthi Attack: Former president of Yemen, Ali Abdullah Saleh, was killed in a roadside attack on Monday after switching sides in the country's civil war, abandoning his Iran-aligned Houthi allies in favour of a Saudi-led coalition. Saleh was killed when the vehicle he was travelling in came under a fire at a checkpoint south of rebel-held Sanaa, a senior Houthi commander said. Several of his senior aides were also killed, he added. Saleh's death at the hands of his erstwhile allies dealt a heavy blow to hopes of an end to the country's protracted conflict and sparked fears of further bloodshed in Sanaa. Two days earlier, Saleh announced he was breaking a three-year alliance with the Iranian-backed Houthis, and that he wanted to "turn the page" on relations with the Saudi-led coalition that launched a military intervention against the Houthis in Yemen in 2015. Saleh's death seems likely to inflame what has become a proxy war in Yemen between Saudi Arabia and Iran.

Trump Travel Ban Gets US Supreme Court Nod: The US Supreme Court has allowed the administration of President Donald Trump to fully enforce the third version of a controversial travel ban that prohibits people from six Muslim-majority countries from entering the United States. The court, with two of its nine justices dissenting, said in an order Monday that the policy can take full effect, even as legal challenges against it make their way through the courts. The ban applies to people from Chad, Iran, Libya, Somalia, Syria and Yemen. Unveiled in September, the latest ban was immediately challenged in federal appeals courts in Richmond, Virginia and San Francisco, California. Lower courts put the ban, which was set to come into effect in mid-October, on hold while the court challenges proceed.

Delhi Pollution: Have We Reached A Point Of No Return? The stoppage during the ongoing India vs Sri Lanka Test match in New Delhi was yet another example of how harmful the air quality is in the nation’s capital right now.

Should Indian Outsourcing Companies Worry About US Net Neutrality? The US’s stance on net neutrality can translate into trade policies that determine who gets what access, depending on where an IT firm is based or where it creates the most jobs.

Decoding The Imports Surge Post Demonetisation: Apoorva Javadekar and Sujan Bandyopadhyay believe that part of the rise in imports is explained by the exchange rate movement. Their analysis claims that the import surge is sort of disconnected from the fact that demonetisation might have broken supply chains to some extent.

Lack Of Moral Courage Was Highlight Of The Papal Visit To Myanmar And Bangladesh: By not raising the Rohingya issue in public while in Myanmar, and by remaining silent on the persecution and pogrom against non-Muslims in Bangladesh, Pope Francis displayed a disappointing lack of moral courage.