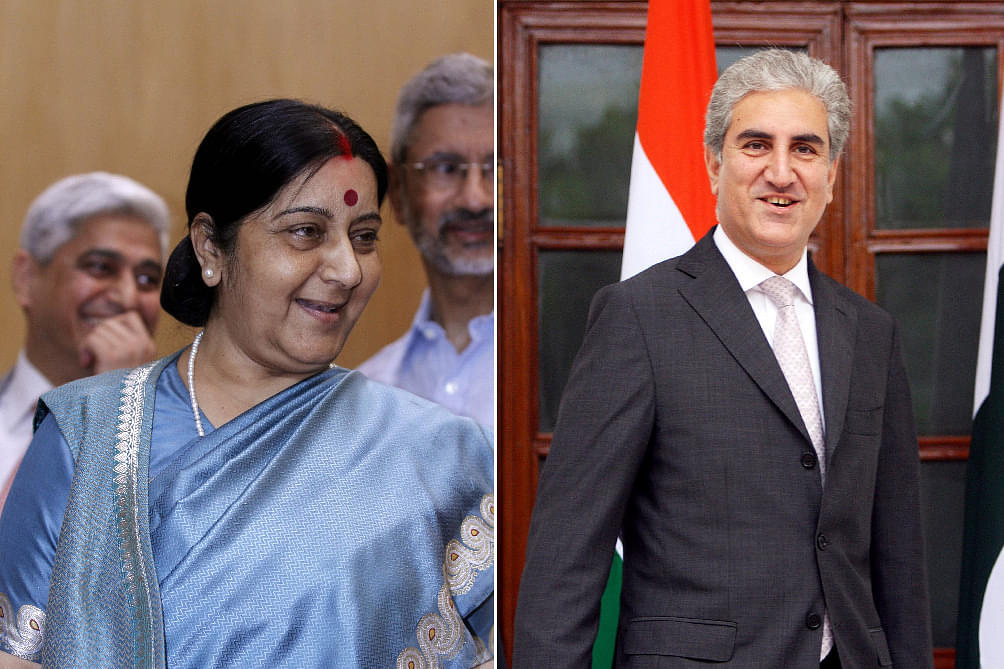 Foreign Ministers Of India and Pakistan May Meet In New York

Foreign Ministers of India and Pakistan, Sushma Swaraj and Shah Mehmood Qureshi, may meet in New York on the sidelines of United Nations General Assembly (UNGA) meeting next month. The 73rd session of the UNGA which will open on 18 September. This development comes just a day after Prime Minister Narendra Modi wrote to Pakistan’s Imran Khan, congratulating him after his swearing-in. However, India is unlikely to decide in favour of restarting the comprehensive bilateral dialogue or formal talks in any other form.

On Tuesday, Pakistan has to walk back on Qureshi’s claim that Modi had expressed interest in resuming dialogue in his letter to Khan. Indian officials have clarified that the letter to the newly sworn-in PM was a congratulatory note and there was no offer of dialogue. The spokesperson for Pakistan’s foreign ministry has now said the country’s new foreign minister did not intend to convey that “the Indian Prime Minister had made an offer of a dialogue”.

Waters north of Greenland that normally remained frozen even in summer are opening as the oldest and thickest sea ice in the Arctic has started to break up. This worrying phenomenon has never been recorded before. It has been triggered by warm winds and climate-change in the northern hemisphere, experts have said. The abnormal temperature spikes in February had adversely affected this thick sheet of white ice, exposing miles of the Greenland coastline.

According to records put out by the Norwegian Ice Service, the sea area around Svalbard - a Norwegian archipelago between mainland Norway and the North Pole area - was at 43,231 square miles on Thursday. This was 44,775 square miles below the average recorded between the years 1981 to 2010. It is also the lowest area for this day of any given year dating back to 1967. Satellite records of the region started being kept by concerned agencies in the 1970s.

Punjab Takes A Cue From Pakistan, Moves Towards Blasphemy Law

In a controversial move on Tuesday, the Punjab cabinet approved amendments to the Indian Penal Code and the Code of Criminal Procedure making sacrilege of religious texts punishable with life imprisonment. The Bill would be tabled in the upcoming session of Vidhan Sabha on 24 August. It has been timed to come up for discussion when a report of Justice Ranjit Singh Commission, set up to probe desecration of Guru Granth Sahib, is submitted.

The spokesperson of the government has defended the amendment saying it has been approved to maintain communal harmony in the state. He added that the decision to approve the amendment was taken at a meeting chaired by Chief Minister Amarinder Singh. Desecration, The Tribune reports, became an emotive issue after a series of incidents involving Guru Granth Sahib in Faridkot and the subsequent firing incidents at Behbal Kalan and Kotkapura in 2015.

Satya Pal Malik Is New Governor Of Jammu And Kashmir

Breaking the convention of not having career politicians as the Governor of Jammu and Kashmir, Satya Pal Malik has been appointed to the post. A former Bharatiya Janata Party member, he was serving as the Governor of Bihar when President Ram Nath Kovind’s office issued a statement on his appointment on Tuesday. Malik is the first career politician to be appointed the governor of the militancy-hit state after Congress’ Karan Singh, who served from 1965 to 1967.

In another blow on the same day, Trump's former campaign chairman Paul Manafort was found guilty on eight counts of financial crimes. He faces a maximum of 80 years in prison for five tax fraud charges, one charge of hiding foreign bank accounts and two counts of bank fraud. Responding to these developments, President Trump said these cases have "nothing to do with Russian collusion".

Imran Khan’s Many Economic Challenges: Delivering on his ‘Naya Pakistan’ promises will require international support and domestic consensus, neither of which will be easy to come by.

The Original Sin Behind The Lira Crisis:Turkey has emerged as a classic case of the complex interplay of macroeconomic forces leading to macro-imbalances.

It were the primitive minds which saw divine punishments in natural disasters. In Hindu cosmology, the final dissolution happens not because of divine anger but as part of natural cycles.