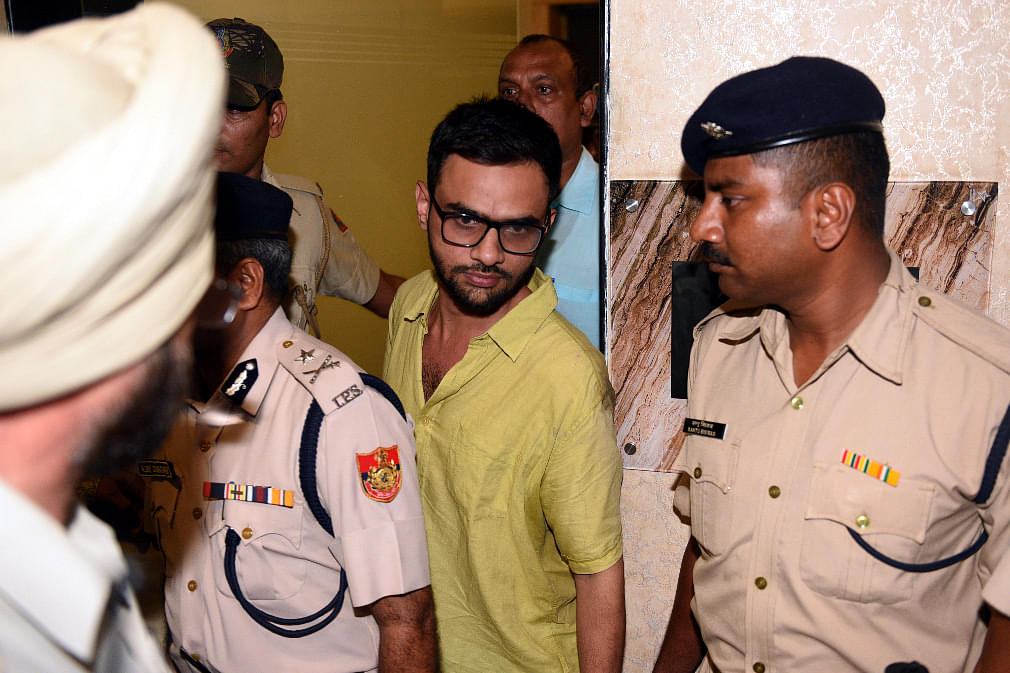 ‘Khalid Wasn’t At The Spot When Shot Was Fired’: Eyewitness

According to reports late on Monday, Jawaharlal Nehru University student Umar Khalid was targeted by an unidentified armed assailant just outside Constitution Club, near Parliament. Khalid said he was attacked “just outside the gate” when he was returning after having tea with his friends. The alleged attack triggered widespread outrage on social media, with multiple left-wing activists blaming a television journalist for “spreading hate” against the “student leader”.

However, according to a senior journalist’s eyewitness account, Khalid was not even present at the site when the unidentified gunman fired in the air. Santosh Kumar of the Dainik Bhaskar, according to the portal My Nation, said Khalid may have been one of those who rushed to the spot after hearing the gunshot. “He was not there when the shot was fired,” Kumar was quoted as saying.

Members of the Gujjar and Bakarwal communities organised a protest in Kashmir demanding the release of rape accused Talib Hussain, the man shot to prominence after leading demonstrations seeking justice in the alleged rape and murder of an eight-year-old girl in Kathua district. According to the Greater Kashmir and the Kashmir Observer, the protesters demanded his release from police custody saying he was being beaten and tortured. Hussain was arrested on the charge of raping a married woman in Udhampur earlier this month.

In her complaint, the woman had alleged that Hussain intercepted her when she had gone to the forest to graze cattle. She revealed that he had threatened her to remain silent. Last month, Hussain’s wife Nusrat Begum had filed an FIR against him alleging he had subjected her to physical torture for dowry.

Retail Inflation Eases To Nine-Month Low Of 4.17 Per Cent In July

Data released by the government late on Monday showed that inflation based on consumer price index (CPI) for the month of July fell to a nine-month low of 4.17 per cent. Its previous low was in October 2017 at 3.58 per cent. In June, the retail inflation stood at a five-month high of 5 per cent. In a Reuters poll, economists had predicted the inflation to come down to 4.51 per cent.

However, at 4.17 per cent, retail inflation remains above the Reserve Bank of India's medium-term target of 4 per cent for the ninth straight month. The RBI revised the inflation projection on 1 August for the second half of 2018-19 to 4.8 per cent from 4.7 per cent earlier. For the first quarter of the fiscal year 2019-20, the bank projected the inflation at 5.0 per cent. Among the factors that influenced the projection was an increase in the minimum support price of Kharif crops.

A Year After Doklam, China Intrudes 400 Meters Into Ladakh

Nearly a year after the intense military face-off at Dolkam, troops of the People’s Liberation Army intruded around 300-400 metres inside the Demchok sector of Ladakh and pitched five tents there. The incident took place in June. According to reports, China removed three of its tents in the Cherdong-Nerlong Nallan area after brigadier-level talks between the two countries. However, two tents with “some Chinese troops in civvies” are still present at the site.

India and China were locked in a 73-day standoff in Doklam in the Sikkim sector last year after the Indian side stopped construction of a road in the disputed tri-junction by the Chinese army. Demchok, the site of the current face-off, is one of the 23 “disputed and sensitive areas” on the Line of Actual Control.

Pune is the most livable places in the country, according to the ranking of 111 cities on the Ease of Living Index released by the Ministry of Housing and Urban Affairs on Monday. The index is based on four parameters - governance, social institutions, economic and physical infrastructure.

Navi Mumbai and Greater Mumbai followed Pune. Tirupati, Chandigarh, Raipur, Bhopal and Indore also featured in the top 10 list. West Bengal, Tamil Nadu and Karnataka, which have a number of big cities, found no spot in the top 10.

Did Trump Forget His Own Afghanistan Strategy: India should ensure that its old friendships remain intact. In case of instability, India’s contacts on the ground will give it a place at the table.

India Needs Open Systems To Build Smart Cities: Experts plan a ‘City Data Exchange’ to build an open stack that can be used by all.

Islamists Show The Door To Polytheists: Time For Cultural Boundaries?

Afghanistan’s intolerance for minorities has reached a new crescendo as evidenced by the recent killings of Hindus and Sikhs. Once referred to as Gandhara, it is now very close to eliminating any traces of non-Islam on its soil.