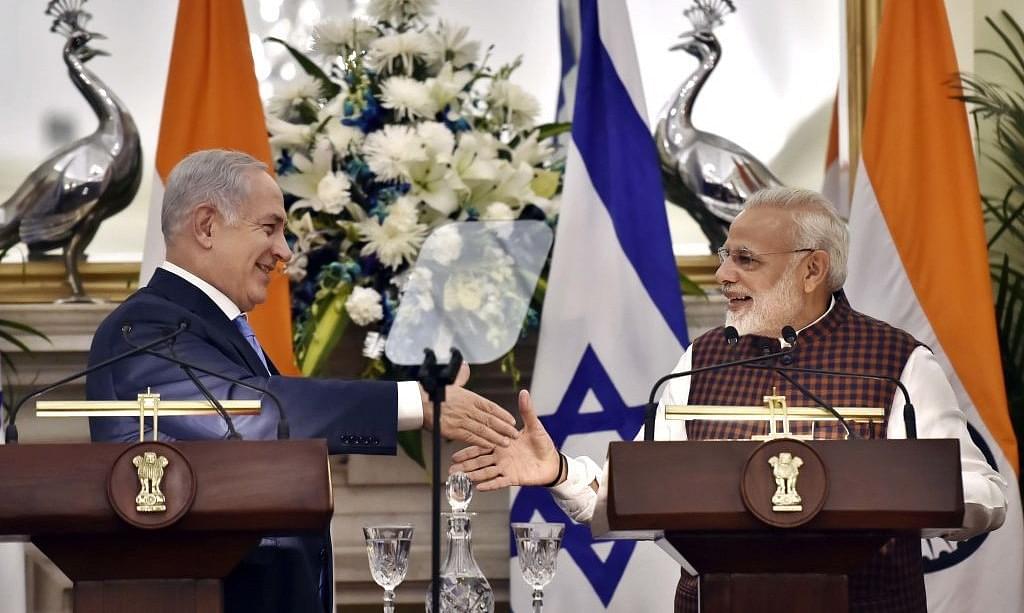 Make In India, Modi Tells Israeli Firms: Prime Minister Narendra Modi on Monday called upon Israeli companies to manufacture more military hardware in India as the two nations inked nine pacts. Meanwhile, Israel Prime Minister Benjamin Netanyahu urged Modi to restart the negotiation on the proposed India-Israel Free Trade Agreement. Modi told reporters that he had called upon the defence companies of Israel to set up joint ventures with firms in India and manufacture more in the country, taking advantage of the foreign direct investment regime, which his government had liberalised. The nine deals signed after the two prime ministers met at the Hyderabad House in New Delhi include two for bilateral cooperation in cybersecurity and the hydrocarbon sector. Israel offered cutting-edge technology to help revolutionise agriculture in India with the use of big data, ground sensors and drones. Modi and Netanyahu also agreed to deepen cooperation in innovation, business and trade, space, counter-terrorism and homeland security, higher education and research, science and technology, and tourism and culture.

Indian Army Kills Seven Pakistani Soldiers And Five JEM Terrorists: The Indian Army killed at least seven Pakistani soldiers on Monday, including a major, as well as five Jaish-e-Muhammed (JeM) terrorists in separate incidents as part of its strategy to "pro-actively dominate" the Line of Control. This comes after Indian Army Chief General Bipin Rawat warned that his force would continue to use its "might" to teach Pakistan harsh lessons if it did not cease aiding cross-border terrorism. "Pakistani troops violated the ceasefire by firing on our forward posts in the Jandrot-Kotli area in Mendhar. Our troops then targeted and destroyed the Pakistan army post at Kotli, which was involved in the ceasefire, with heavy mortar shelling," a senior officer said. In the other incident, the Army killed five JeM terrorists while thwarting a major infiltration bid in the Uri sector along the LoC, around 100 km from Srinagar, in an overnight operation that ended on Monday morning.

Jallikattu Tragedy: Jallikattu celebrations turned into a tragedy at Palamedu village in Tamil Nadu’s Madurai district on Monday, after a bull gored a teenager to death and injured 26 people. S Kalimuthu (19), a spectator, succumbed to injuries at a government hospital in Madurai. He hailed from Sanarpatti village of Dindigul district. Another person who suffered serious injuries was among the six admitted to the hospital, according to the police inspector at Palamedu who was investigating the case. He said he had received a complaint from the mother of the deceased and was investigating. Jallikattu, a traditional bull taming sport, is played as part of Pongal festivities in Tamil Nadu. As per the rules, a bull tamer will be awarded a prize if he hangs on to the hump of the animal for a certain period of time.

Government To Break Up Air India Into Four Firms Ahead Of Sale: The Union government will break up debt-burdened Air India into four separate companies and offer to sell at least 51 per cent in each of them as part of a disinvestment proposed by Prime Minister Narendra Modi. The core airline business comprising Air India and Air India Express – the low-cost overseas arm – will be offered as one company, and the process will be completed by the end of 2018, Junior Aviation Minister Jayant Sinha said in an interview on Monday. Its regional arm, ground handling, and engineering operations will also be sold separately in the same process. The airline, which is surviving on a taxpayer-funded bailout, has strained government finances for decades. "The aviation sector is a very fast growing sector, with really exciting opportunities for all participants, so we felt all of this will unlock growth and competitiveness of Air India group," Sinha said. "We expect it to be a very bright future for its employees."

Army To Launch Aadhaar-Based Online Grievance Redressal System: A new online grievance redressal system will be launched by the Indian Army which will be based on Aadhaar number, Army Chief General Bipin Rawat said on Monday. “A new Aadhaar-based mobile application is being developed, through which every soldier will be able to post his grievances online, and it would be addressed as soon as possible,” the Army chief said at the 70th Army Day parade. “It will also have other useful information for the soldiers. It will be launched soon.” The Army chief last week said the Army is working on evolving a better system for providing aid to the children of martyrs and those disabled in action, after the government put a Rs 10,000 cap on the monthly fund. He also said that the Army Welfare Education Society has approved a plan for two residential schools with a capacity of 2,000 students.

Telecom Sector Faces More Job Losses: India’s telecom industry is bracing for more job losses. According to a report, the once-sunshine telecom sector will continue to witness decline in headcounts for the next six-nine months taking the total number of job losses to 80,000-90,000. The sector, which has been witnessing rough weather in terms of profitability due to rising competition and lower margins, has witnessed large scale lay-offs making job scenario uncertain, said a CIEL HR Services in a report. “The attrition rate is likely to remain high at least for the next two-three quarters and the sector is likely to reduce around 80,000-90,000 people,” the Bengaluru-based company’s chief executive Aditya Narayan Mishra said. The report is based on a survey among around 100 senior and mid-level employees of 65 telco and software and hardware service providers to telecom companies.

Judges’ Row Resolved, Says Bar Council: The Bar Council of India (BCI) said on Monday the crisis, which had erupted after four top Supreme Court judges came out openly against allocation of cases by Chief Justice of India Dipak Misra, has been resolved internally and the “story is over now”. BCI chairman Manan Kumar Mishra, who led a seven-member delegation and held hectic parleys with 15 judges including the CJI, said the controversial issues flagged by the four revolting judges were “internal issues of the family” which have been resolved internally. “BCI has been successful in its effort. No outside interference was required in the matter and even we will not impose any condition on them and they themselves would solve their differences over a cup of tea,” he said and added that all the four top judges have resolved the differences and were attending the court on Monday.

Turkey Vow To Destroy US-Backed Syria 'Terror Army': Turkish President Recep Tayyip Erdogan on Monday threatened to thwart the creation of a new US-backed 30,000-strong border security force in northern Syria before it was even set up. The US announced its support on Sunday for plans for a “border force” to defend territory held by US-backed, Kurdish-led fighters in northern Syria. The Syrian government of President Bashar Al Assad responded on Monday by vowing to crush the new force and drive US troops from the country. Assad’s ally Russia called the plans a plot to dismember Syria and place a part of it under US control. But the strongest denunciation came from Erdogan. “America has acknowledged it is in the process of creating a terror army on our border. What we have to do is nip this terror army in the bud,” Erdogan said.

Six Months Later: Taking Stock: GST has economically united the country through the underlying notion of “One Nation, One Tax, One Market”. Six months is too short a period to evaluate any mega reform, but it is a good time to take stock of what has been achieved and what can be done to make it better.

Apparel Industry Model Holds The Key For India’s Job Creation Requirements: High wages are now forcing China to withdraw from this market. From $187 billion in 2014, its apparel exports have fallen to $158 billion in 2016. India must take the space China is vacating.

The Last Budget Of Modi Government: Given that inflation is on the rise and is likely to be in the near- to medium-term, the worry on the fiscal situation will weigh heavily on the mind of Finance Minister Arun Jaitley. The budget to be presented on 1 February may be the last full budget of the Narendra Modi government unless it uses the opportunity to revive the economy.

Is Sensex Too Hot To Handle? Time For Caution, But No Need To Write Off 2018 As Yet: Since the uptick in the economy is just beginning, with the IIP at a two-year high in November, and exports also beginning to pick up, one can reasonably expect earnings growth to rise in fiscal 2018-19.