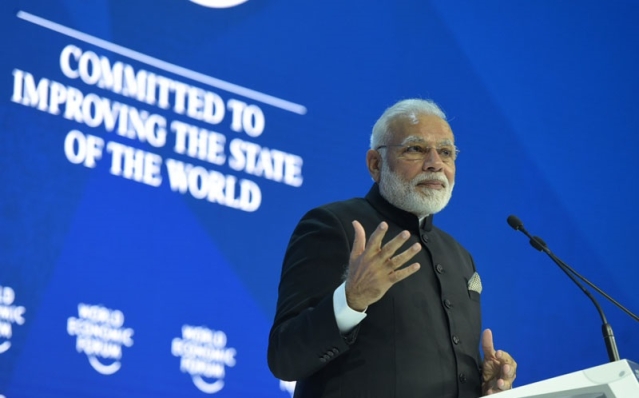 Prime Minister Narendra Modi delivering his keynote speech at the plenary session of the World Economic Forum in Davos. (pmindia.gov.in)

Modi Builds A Case Against Protectionism: Sending out a strong message against protectionism and inward-focused economic policies, Prime Minister Narendra Modi today said such tendencies can be as dangerous as terrorism and climate change as he pitched for creating a "heaven of freedom" free from divisions. Modi, who became the first Indian Prime Minister to address the World Economic Forum (WEF) annual summit in Davos, Switzerland in two decades, sought to hard sell India as an investment destination, saying those wanting wealth with wellness and peace with prosperity should come to the country. Modi said "the government is following the principle of reform, perform and transform and that the country is moving towards becoming a $5 trillion economy by 2025". The Prime Minister also emphasised that a predictable, stable, transparent and progressive India is good news in an otherwise uncertain global environment.

SC Tells Centre To Set Up Mahanadi Water Tribunal: The Supreme Court of India on Tuesday directed the Union government to constitute a tribunal within a month to resolve Mahanadi water sharing dispute between Odisha and Chhattisgarh. A bench of justices S A Bobde and L Nageswara Rao rejected the arguments of the Centre that there was no need for an exclusive tribunal to resolve the Mahanadi river water sharing dispute and directed the Centre to begin the process for constitution of a tribunal soon within a month. The Supreme Court's direction has come at a time when the Centre has consistently overlooked the demand of the state government to constitute the tribunal for the last one year. Welcoming the apex court's direction, Chief Minister Naveen Patnaik said this will go a long way in protecting the interests of the people of Odisha, especially the farmers.

Jaitley Woos ASEAN Members To Invest In India: Finance Minister Arun Jaitley on Tuesday made a strong pitch to ASEAN members to invest in India's infrastructure and services sectors, citing the country's global integration and opening up in terms of trade and investments. "We in India offer great opportunities in terms of large infrastructure investment that we need," Jaitley said at the ASEAN-India Business and Investment Meet on Tuesday. He said India's growth rate has picked up in the last 25 years and investors look at the prospects of the country's economic growth over the next two to three decades. Jaitley also said that India may become one of the three largest economies of the world in the next 25 years as the country has demonstrated its capacity to grow even during times of adversity. India's exports to ASEAN increased to about $31 billion in 2016-17 from $25.15 billion in the previous fiscal. Imports too grew to $40.61 billion in 2016-17 from $40 billion in the previous year.

Petrol And Diesel Prices At Three-Year High: Fuel prices hit their highest level on Tuesday in over three years following which the Petroleum Ministry has sought a cut in excise duty. Petrol sold costliest in Mumbai at Rs 80.25 per litre, followed by Kolkata and Chennai at above Rs 75 a litre. In Bengaluru, petrol was Rs 73.52 and in Delhi, it cost Rs 72.38 per litre. The rates are highest since March 2014. Petrol prices have jumped by Rs 3.30 per litre since mid-December. Diesel, too, sold costliest in Mumbai at Rs 67.30 per litre followed by Chennai at Rs 66.64, Kolkata at Rs 65.86 and Bengaluru at Rs 64.26. In Delhi, diesel rates jumped Rs 63.20 per litre, rising by Rs 4.86 a litre since mid-December. Petrol and diesel prices have been on a continuous rise since the past month but the Finance Ministry has not reacted. It, however, cut the duty only once by Rs 2 in October last year. The prices of the two commodities had touched their three-year high prompting the opposition to raise its pitch for bringing it under the goods and services regime.

CPI-M Pushing For Impeachment Motion Against CJI: The Communist Party of India-Marxist (CPI-M) general secretary Sitaram Yechury said on Tuesday that his party is discussing with other opposition parties the possibility of impeaching Chief Justice of India Dipak Misra. “Looks like the crisis is not resolved yet, so we need to intervene and it’s time to play the role of the legislature. We are discussing with opposition parties the possibility of an impeachment motion against the CJI in the budget session,” Yechury said. On 12 January, four top judges of the court said their attempts to convince Misra to address a judicial crisis had gone unanswered, and they had to speak out so that “democracy survives”. Justices Jasti Chelameswar, Rajan Gogoi, Madan B Lokur and Kurian Joseph had objected to the way Misra allocated certain cases to various benches. The opposition would need signatures of at least 50 MPs in the Rajya Sabha or 100 MPs in the Lok Sabha to set in motion the process of impeachment of a judge. Earlier, parties like the Congress, CPI and CPM had demanded that there is a need for a probe into the issues flagged by the judges.

ICJ Fixes Time-Limits For India-Pakistan In Kulbhushan Jadhav Case: The International Court of Justice (ICJ) has set separate deadlines for India and Pakistan for the filing of the written pleadings by them in the Kulbhushan Jadhav case. April 17 and 17 July have been fixed as “time-limits” for India and Pakistan respectively. Jadhav, 47, was sentenced to death by a Pakistani military court on charges of espionage and terrorism in April last year. This prompted India to move the Hague-based ICJ in May. Subsequently, a 10-member bench of the ICJ on 18 May restrained Pakistan from executing Jadhav till adjudication of the case. Pakistan claims its security forces arrested Jadhav from its restive Balochistan province on 3 March last year after he reportedly entered from Iran. India, however, maintains that Jadhav was kidnapped from Iran, where he had business interests after retiring from the Indian Navy.

UN Chief Rules Out Mediation On Kashmir: United Nations Secretary-General Antonio Guterres has ruled out any mediation to resolve the Kashmir issue unless all parties agree to it and asked India and Pakistan to address their outstanding issues through talks amidst heightened tensions along the border. “The Secretary-General would encourage both sides to address any outstanding issues through dialogue,” UN Secretary-General’s spokesman Stephane Dujarric said. The relations between India and Pakistan are strained following series of attacks by Pakistan-based terror groups and incidents of ceasefire violations, causing casualties on both sides. India is opposed to any third-party intervention in resolving the Kashmir issue while Pakistan has continuously sought mediation to sort out the differences. Asked why the Secretary-General is not so keen to involve himself in this crisis, Dujarric said, “in principle good offices of Guterres are always available for mediation, but everyone needs to agree on involving the UN”.

How To Make Businesses GST Compliant? Make GST Business Compliant: The market encourages suppliers who are GST-compliant. GST was welcomed because it aimed at creating an incentive for compliance, rather than punishment for non-compliance.

The Winding Road To Justice In India: It is believed that India has 32 million pending cases, the majority of which are in district courts, relate to criminal law and are pending for over two years.

How Emulating The Jio Model Could Put India’s Public Transport System In The Fast Lane: If public transport emulates the Jio model on a large scale, it would spark the much needed competition, which in turn would fetch better services, and better services is what the public needs.