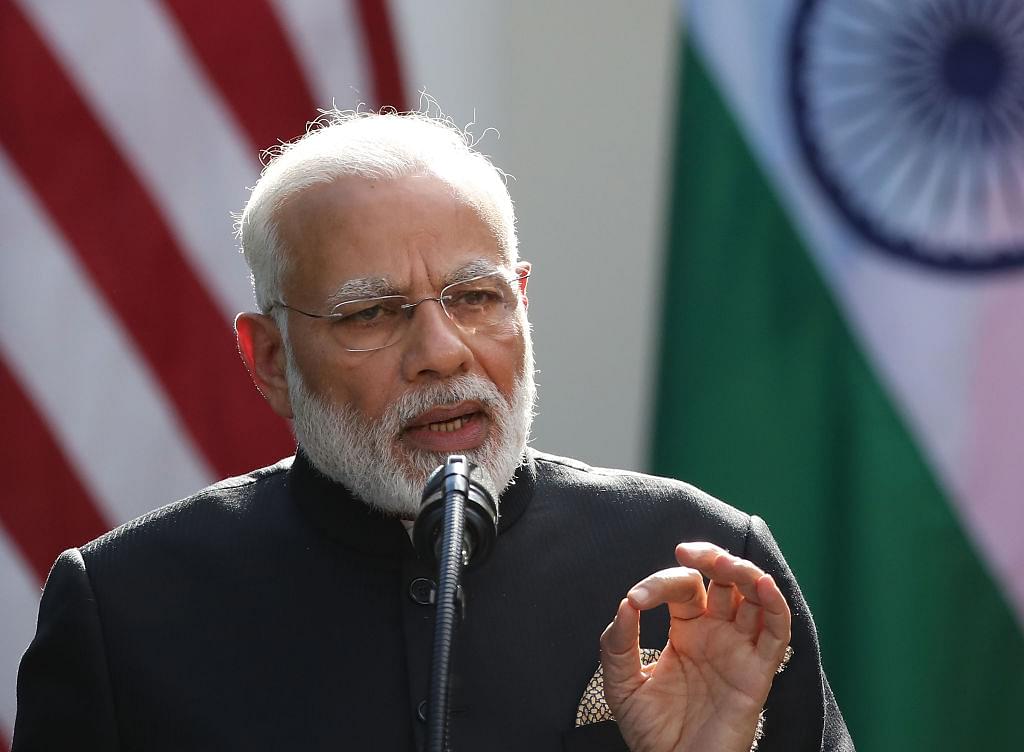 Modi Pushing For Rules-Based Regional Security Architecture: Prime Minister Narendra Modi has strongly pitched for a rules-based regional security architecture during a meeting with Philippines President Rodrigo Duterte as the two countries signed four agreements at the first bilateral summit in Manila on the sidelines of the ASEAN summit. This comes after India and the Philippines found common cause in issues relating to security and commerce in the Indo-Pacific as well as terrorism at a time when the island nation has emerged from a pitched battle against Islamic State-affiliated groups and growing convergence among India, the US and Japan over the need to deal with China's intent to dominate the region. At the ASEAN-India Summit, Modi identified terrorism and extremism as the major challenges facing the region and said it was time to deal with it collectively.

Synergy In Training: New Focus Area For Armed Forces: The Indian armed forces have formulated a joint training doctrine after finalising a new joint war doctrine earlier in the year in a bid to inject some much-needed synergy and integration among the army, navy and the air force. "The three Services fight the same war at the end of the day. So, there is the need to train together for it. This is the first time that such a keystone document has been promulgated. It brings out at the macro-level the approach to joint training, fundamentals, objectives, joint structures, planning and other aspects," said an officer. The 51-page "Joint Training Doctrine, Indian Armed Forces – 2017" was issued after being cleared by the chiefs of staff committee, comprising Admiral Sunil Lanba, Air Chief Marshal B S Dhanoa and General Bipin Rawat on Tuesday.

Suresh Prabhu Signals Manufacturing And Export Strategy Shift: Signalling a shift in India's manufacturing and export strategy, Commerce and Industry Minister Suresh Prabhu has set focus on new emerging sectors such as genomic. His ministry is also giving a thrust to export of goods that are currently not among the top 10 items shipped out of the country, banking on strong India ties with Cuba and many in Africa to push exports to new markets. Prabhu said that India has to put in place its own model as it seeks to increase the share of manufacturing in gross domestic product from the current level of under 20 per cent to increase employment and also help agriculture in segments such as food processing. “It is not going to be easy to increase the share of manufacturing because services will always grow faster. We have to make sure that manufacturing has to keep pace with services growth," the minister said. Prabhu is working on the launch of 'Make in India 2.0' along with a similar scheme for services where the thrust will be on a greater presence in the global arena.

Malnutrition And Air Pollution Two Of India's Biggest Health Hazards: Report: A report published in one of the world's oldest medical journals found that child and maternal malnutrition continues to be the biggest health hazard in India since 1990, while deteriorating air quality came a close second. Besides malnutrition and rising air pollution, dietary risks, high systolic blood pressure and diabetes were other major risk factors in India in 2016, revealed the report in the Lancet journal. In 1990, air pollution was the third largest risk factor in the country but it moved to the second rank in 2016. According to the findings, underdeveloped states, including Bihar, Jharkhand, Uttar Pradesh, Rajasthan, Madhya Pradesh and Haryana have recorded a low epidemiological transition level, and thereby suffer from a higher health burden from these risk factors. If calculated in terms of life years lost due to air pollution, or what medical experts call disability adjusted life years (DALYs), Delhi has a DALY rate of 1890, when compared to Bihar (4308) and Uttar Pradesh (4390).

Hate Crime Against Hindus-Sikhs Rising In US: For a second consecutive year, the Federal Bureau of Investigation (FBI) has reported an increase in hate crimes in the US, with Hindus and Sikhs among those targeted in the more than 6,000 incidents of crimes motivated by biases towards religions, race, ethnicity and sexual orientation. There were 10 incidents of hate crimes against Hindus and seven against Sikhs in 2016 – the year of the rise of Donald Trump as a politician and his election as president. The number of hate crimes against Hindus, whose numbers are estimated to be around 2.1 million, were not listed separately in the 2014 FBI report, but have figured independently in the next two annual reports – with five in 2015 and 10 in 2016. The number for hate crimes against Sikhs, whose population is estimated to be 500,000, went up from six in 2015 to seven in 2016. The community has been a victim of hate crimes as they are usually mistaken as Arabs due to their turbans.

Exports Decline And Trade Deficit Widens, Says Official Data: According to official data released by the Commerce Ministry, exports have declined by 1.12 per cent to $23 billion in October, retreating from a six-month high growth in September as shipments of textiles, pharmaceuticals, leather and gems and jewellery fell. India’s exports had soared by 25.67 per cent to $28.61 billion in September, logging its highest growth in last six months on the back of expansion in shipments of chemicals, petroleum and engineering products. Imports, however, grew by 7.6 per cent to $37.11 billion in October from $34.5 billion in the year-ago month. Trade deficit widened to $14 billion during the month under review as against $11.13 billion in October 2016. Oil and non-oil imports grew by 27.89 per cent and 2.19 per cent to $9.28 billion and $27.83 billion respectively in October.

New Yashwant Singh Salvo: Senior Bharatiya Janata Party leader and former finance minister Yashwant Sinha is at it again. He hit out at Narendra Modi government on demonetisation and implementation of the goods and service tax (GST). Criticising Finance Minister Arun Jaitley for "failing the people" of the country, he said, “the people of India can demand his resignation for a slowed down economy and failures of the demonetisation and GST". Sinha was invited to poll-bound Gujarat by the activists associated with Lokshahi Bachao Andolan (Save Democracy Movement) to share his views about the current state of economy and impact of demonetisation and GST. Sinha said the Finance Minister believes in only one rule, "that is chitt bhi meri patt bhi meri, means heads I win, tails you lose." "He cannot take credit for imposing on the country a deeply flawed tax system, and people of this country are well within their right to demand that he should lose his job," Sinha said.

PAN Applications Jump 300 Per Cent, Says CBDT: Following last year’s demonetisation, there has been a significant 300 per cent jump in the number of applications for permanent account number (PAN), Central Board of Direct Taxes (CBDT) said on Tuesday. CBDT Chairman Sushil Chandra said while there were around 2.5 lakh PAN applications per month earlier, after the government demonetisation in November last year, the number rose to 7.5 lakh. Chandra further said that the CBDT was taking a number of measures to curb black money and that steps such as no cash transaction of above Rs 2 lakh was a move in that direction. “All these measures and demonetisation will act as solutions to curb the use and generation of black money in the country. More and more people applying for PAN means they want to keep their businesses and financial transactions clean,” the CBDT chief said. About 33 crore PAN cards have been issued in the country till now.

The Rich Know How To Sidestep Responsibilities: Industrialised nations are historically responsible for greenhouse gas emissions. They have a moral obligation to help poor countries tackle climate change. The Paradise Papers show how the wealthy and powerful use tax havens – some do it legitimately, others for re-routing illegal wealth – to avoid or evade tax liabilities.

After Teething Pain, MSMEs Stand To Gain Under GST: In the near term, though, MSMEs would feel the pinch as large businesses have delayed payment to small suppliers in many cases as they try and manage cash flows under GST. Increased transparency post-GST would enable tax-compliant MSMEs to secure easier access to formal funding at competitive rates.

Obfuscation Online: To fool modern pattern matching technologies, we will need to generate noise that is so similar to the data that is sought to be extracted, as to make identifying that data ambiguous and difficult to exploit. With privacy, we might need to take matters into our own hands.

Aadhaar Needs A Privacy Law: Debate on Aadhaar and privacy has largely reached an impasse as those involved often use different definitions of data privacy. We need to avail of Aadhaar’s benefits and manage the risks, while evaluating whether the benefits are worth the risks.

Bangladeshi Hindus: Less Than 5 Per Cent, Very Soon: “‘Below five per cent’ is a huge psychological and physical setback for non-Muslims in an increasingly Islamist country. Once our population falls below 5 per cent, we are doomed. We will have to convert or leave the country.”