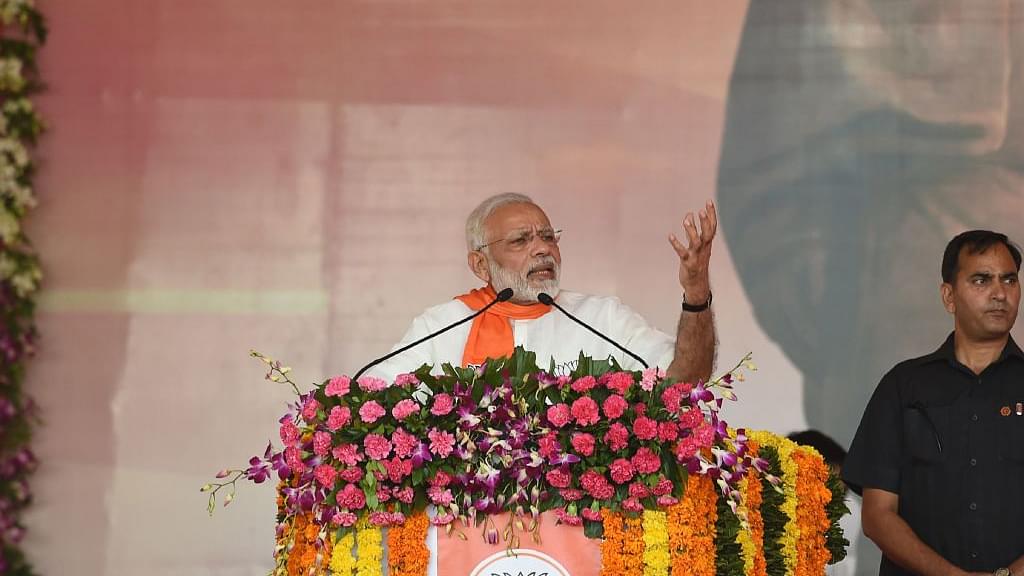 Modi Vows To Push Ahead With Economic Reforms To Maintain Financial Stability: Prime Minister Narendra Modi on Sunday pledged to push ahead with economic reforms and said the government would maintain financial stability while initiating these measures. "After the reforms and hard decisions, the economy of the country is on track and in the right direction... We will take all necessary steps to increase investments and bring in economic development," Modi said, addressing a rally in Dahej. He said several economists have described the fundamentals of the economy as robust. "Looking at the recent figures, the production of coal, electricity, natural gas and other items has increased significantly. Foreign investors are making huge investments in the country. Foreign exchange reserves too have reached $400 billion," Modi said.

US Considering India’s Request For Predator Armed Drones: Weeks after approving the sale of high-tech unarmed Guardian drones to India, the Donald Trump Administration is reported to be “considering” New Delhi’s request for Predator armed drones for its Air Force. The armed drones, the IAF believes, would help in strengthening its defence capabilities. Early this year, the IAF had requested the US government for General Atomics Predator C Avenger aircraft. It is understood that the IAF would need 80 to 100 units making it approximately a whopping $8 billion deal. “Yes, yes,” a senior administration official said when asked about India’s pending request about the purchase of armed drones as part of its armed forces’ modernisation drive.

Rakesh Asthana Appointed CBI Special Director: The Appointments Committee of Cabinet (ACC) on Sunday named senior Indian Police Service (IPS) officer of the Gujarat cadre Rakesh Asthana as special director in the Central Bureau of Investigation (CBI). He is now the second senior-most officer in the central anti-corruption agency after CBI director Alok Verma. Asthana's elevation comes as part of promotion of eight IPS officers of the 1984 batch. Asthana is currently an additional director at the CBI and is handling several important probes including the AgustaWestland scam and cases related to allegations of corruption in Delhi government among others. Apart from Asthana, the ACC cleared the promotion of seven other IPS officers of the 1984 batch to the rank of special director or special director general in central agencies and central paramilitary forces.

Ethics Body For Legal Profession Backed: The Union government and the Supreme Court are in favour of setting up an independent body to regulate ethics in the legal profession. “There is need to regulate professional fee and ethics which can be done by an independent body instead of elected body of the Bar,” according to the minutes of the meeting attended by the top brass of the Prime Minister’s Office and secretaries from the ministries of finance, revenue and law and NITI Aayog. The Department of Justice pointed out in a presentation to the judges and the government officials that “unsatisfactory regulation of legal profession was an obstacle in improving India’s ranking in enforcement of contract parameters under the World Bank Doing Business report.” According to a World Bank report, India was placed 172 out of 190 countries on the parameter of enforcing contracts, which measures the time and cost of resolving a commercial dispute and the quality of judicial processes.

Shell Companies Facing Criminal Action Under Revamped Law: As part of the latest government crackdown against hundreds of "shell companies" which deposited unexplained high-value notes during demonetisation or operated bank accounts after their names were struck off could be the first set of entities to face criminal action under the revamped Companies Act. The Ministry of Corporate Affairs, which initiated action to de-register over 2 lakh companies that had not filed returns, is planning to invoke provisions of section 447 of the new Companies Act which relates to fraud, citing public interest, said sources. The law provides for imprisonment of three to 10 years in case of fraud and can come with a penalty that is equal to the value of the offence. Preliminary data accessed by the tax department had revealed Rs 4,600 crore routed through bank accounts of less than 6,000 companies. Some of the companies had over 900 bank accounts.

Rs 1,176 Crore Kutch Smart City Project Cleared: Kandla Port Trust (recently renamed as Deendayal Port) has been given the environment clearance for setting up a Rs 1,176 crore smart industrial port city in Kutch, Gujarat. The proposal is to develop a smart industrial port city at two separate sites in Gandhidham which would house about 35,700 residential flats, schools and parks, and would generate jobs to more than 60,000 people. “The environment ministry examined the Kandla Port’s proposal and gave the final environment clearance for developing a smart city at two identified sites,” a senior government official said. As per the proposal, one smart port city in 580 acres has been proposed at Adipur side on South of Tagore road, while the second site over an area of 850 acres is near KPT complex in Gandhidham. Kandla Port Trust is one of the top 12 major ports in the country.

Kidambi Srikanth Wins Denmark Open 2017: Kidambi Srikanth continued his phenomenal run as he defeated South Korea’s Lee Hyun Il 21-10, 21-5 to win Denmark Open 2017 title on Sunday. Srikanth, who made it into the final with 21-18, 21-17 win over China’s Wong Wing Ki, dominated the game right from the word go as he won the opening game 21-10 in just 12 minutes. The 24-year old took an 11-1 lead in the second game as Lee Hyun found it difficult to make a comeback against Srikanth. The lanky Indian shuttler finished the game comfortably, in just 25 minutes. “I am really happy the way I played today and thanks to everyone for supporting me throughout the week. I am looking forward to coming next year too and defend this title,” said the Indian shuttler after the win.

Can Blockchain Technology Be An Answer To India’s Land Governance Woes? The apparent reason for India’s land titling problem is an archaic piece of legislation– The Registration Act, 1908 – that allows only ‘presumptive’ ownership. There are many dimensions of land reforms in India, while blockchain is no short-cut, but in combination with other institutional reforms, clearly offers a feasible solution.

Will An Economic Slowdown Hamper Narendra Modi’s Re-Election Bid? Notions that voters reward good governance and economic growth are too simple and idealistic for the staggeringly complex electoral democracy that India is. It is unclear that economic variables play a decisive role in shaping the average Indian voter’s behaviour as much as the educated elite would like to believe.

The Balancing Act That Is GAAR: GAAR applies to an arrangement where the main purpose is to obtain a tax benefit, and which, among others, lacks commercial substance. The law will have to clearly separate the entity availing legitimate tax benefits from the one seeking to avoid taxes.

Unbundling Of Space: There is a big opportunity in space for a nation like India where talent and cost advantage combine in large numbers to make business sense. The unbundling of space has immense potential to generate a large number of jobs in India – reminiscent of the information technology revolution in India.

Empowering Households: How Urja Ganga Project Could Be The Next Big Thing: How the CGD market evolves eventually will depend on how quickly the Urja Ganga project adds new cities on its way and the interest local population demonstrates in getting piped natural gas.