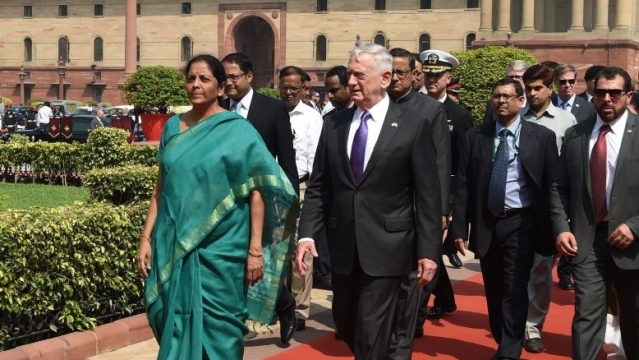 Mattis walks with Defence Minister Nirmala Sitharaman at Defence Ministry prior to a meeting in New Delhi. (PRAKASH SINGH/AFP/GettyImages)

US Vows To Work With India To Eradicate Terror Safe Havens: US Defense Secretary Jim Mattis hit out at countries harbouring terrorists, saying 'there can be no tolerance of terrorist safe havens'. In a veiled attack on Pakistan, Jim Mattis, who is on a two-day visit to India, said, "there can be no tolerance of terror safe havens as global leaders India and the United States resolve to work together to eradicate this scourge.” After holding bilateral talks on taking defence cooperation, Mattis said, "US goal is to promote pragmatic progress between Washington and New Delhi in our defence partnership, delivering defence inter-changeability aligned with Prime Minister Narendra Modi and President Donald Trump's decision." Washington welcomed Indian efforts to promote stability in Afghanistan, he added. New Delhi has committed $3 billion in development projects in Afghanistan and trains Afghan officers in India.

Pakistan Spy Agency Accused Of Protecting Terrorists: Pakistan’s Intelligence Bureau (IB) has been accused by one of its own spies of “protecting” terrorists. In a petition filed in the Islamabad High Court, he requested the court to refer the matter to the Inter Services Intelligence for a thorough probe, said a report in Dawn. Malik Mukhtar Ahmed Shahzad, a serving assistant sub-inspector of Intelligence Bureau (IB), has accused his senior officers of not taking action against terrorism suspects. Shahzad claims that he reported against terrorist groups from various countries but no action was taken. "No action was ever been taken by IB in this respect despite concrete evidence provided to it in the form of intelligence reports," he said. The petition also claims some IB officials travelled to Israel and had direct links with Afghan intelligence which, it was found later, had links with another terrorist group from Kazakhstan.

Safety Checks For 5,247 Big Dams: In yet another first, the Union government is planning to carry out a 'break analysis' of 5,247 large dams across the country, and put in place an emergency action plan, especially for the 196 that are over 100 years old. Break analysis is the examination of dams to identify potential failures that may result in an uncontrolled release of water. It involves the characterisation of threats to public safety that a dam poses. The government has already drafted a 'dam safety bill', currently being reworked by the NITI Aayog. "While the goal is to eventually work on all dams in the country, we are working on 225 dams, and these don't include all the 196 dams that are more than 100 years old. For the first time, last month, we prepared a draft emergency action plan, which deals with situations that (could) arise in case of a breach, areas affected, rehabilitation, and so on," Dam Rehabilitation and Improvement Programme director Pramod Narayan said.

GST Yields Rs 90,669 Crore In August: The Centre has garnered Rs 90,669 crore from goods and services tax (GST) in August. The collections are lower than July, when the government had collected Rs 92,283 crore as on 29 August, which has now been revised upwards to Rs 94,063 crore (as on 31 August). “The total revenue of GST paid under different heads (up to 25 September 2017) is Rs 90,669 crore,” the Finance Ministry said, adding these figures do not include GST paid by 10.24 lakh assesses, who have opted for composition scheme. The GST was implemented across the country in place of more than a dozen central and state levies like excise duty, service tax and value added tax from 1 July.

Kashmir’s Longest Surviving Militant Killed In Uri: Security forces have killed Kashmir’s longest surviving militant Qayoom Najar while he was trying to infiltrate into the Valley from Lachipora area of Uri sector in Baramulla district along Line of Control (LoC). Najar, head of Lashkar-e-Islam, a breakaway group of Hizb-ul-Mujahideen, was one of the longest surviving Kashmiri militant commanders and carried Rs 10 lakh bounty on his head. Najar, 43, joined the insurgency when he was 16. Baramulla senior superintendent of police Imtiyaz Hussain said that Najar was behind more than 50 killings, IED blasts, weapon snatchings and attacks on mobile towers. “Najar was killed as security forces foiled an infiltration bid in Lachipora area near the LoC this morning,” Hussain said. He was the fifth militant to be killed in Uri since Sunday.

Bengaluru And Kolkata To Get 5G Soon: Bengaluru and Kolkata will be able to experience mobile data speeds three times faster than 4G in a few months time. India's largest telecom operator Bharti Airtel on Tuesday said it has deployed a 5G capable technology. The deployment of 'massive multiple-input multiple-output (MIMO) technology', a key driver for futuristic 5G networks, will start from Bengaluru and Kolkata, the company said and added that the technology will also be rolled out to other parts of the country "soon". The announcement came as the Union government on Tuesday set up a panel to lay down a roadmap for the rollout of 5G mobile networks in India by 2020, in a move that not only promises to make wireless connections blazingly fast but will also make room for the proliferation of Internet-connected smart devices.

Tesla Planning To Drive Into India: Electric car-maker Tesla has initiated talks with the Indian government to enter the country through the single-brand retail route. The Elon Musk-founded company has written to the government evincing interest in entering the market through the single-brand retail window, said a report in The Times of India. The development comes months after Musk had tweeted about the import duty and sourcing requirements. The government is expected to formally reply to Tesla over the next few weeks, considering there is interest not just from buyers but even at the level of Prime Minister Narendra Modi, who had visited the company's headquarters in 2015 in what was seen as an attempt to get the company to India.

Saudi Arabia To Let Women Drive: Saudi Arabia announced on Tuesday that it would allow women to drive, ending a longstanding policy that has become a global symbol of the repression of women in the ultraconservative kingdom. State-run Saudi Press Agency and state TV reported the news, saying King Salman decreed that both men and women to be issued drivers' licences. Women, however, will not be allowed to obtain licences immediately. A committee will be formed to look into how to implement the new order, which is slated to come into effect in June 2018. Some ultraconservative clerics in Saudi Arabia, who wield power and influence in the judiciary and education sectors, had warned against allowing women to drive. They argued it would corrupt society and lead to sin.

Need To Move Away From Garden-Variety Monetary Policy: The RBI’s industrial outlook survey reveals a waning of optimism in Q2 about demand conditions and other parameters like capacity utilisation, profit margins and employment. A central bank is expected to maintain a bright and inviolable line between fiscal and monetary policy only under normal circumstances.

Indian Renewable Sector At Crossroads: As the solar sector matures, it faces new challenges and the policy environment needs to adapt accordingly. Aggressive bidding and sharp fall in prices have raised concerns if the solar sector will suffer the same fate as thermal power or roads.

Powering India’s Economic Growth: India’s growth story needs to be seen as one of growth of regional powerhouses, fuelled by investments. Investment appears to be the largest challenge to growth for Maharashtra, the richest state in the country by GDP.

PM Modi And His Government Must Help Themselves To Some Street-Smart Tactics: The Prime Minister must go in for a shock therapy on the leftists, the media, and other fifth columnists of deepstate to divert them away from their shenanigans. Now it’s important to not just level, but change the playing field – at the moment, you are playing on their field, force them to play on yours.