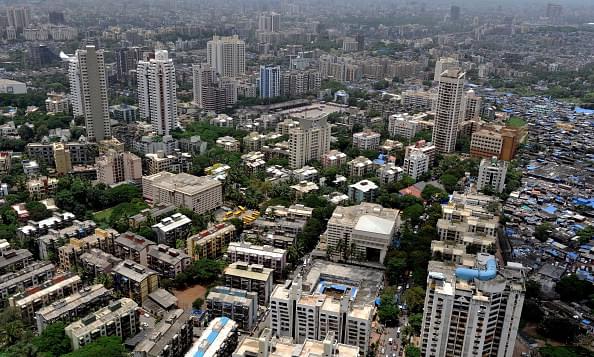 Residential apartment blocks in the heart of Mumbai. (PUNITPARANJPE/AFP/GettyImages)

Now, Aadhaar Linking For Properties: Property transactions would be linked to Aadhaar soon, Union Housing Minister Hardeep Puri said on Tuesday. He said such a move would go a long way in sucking out black money from real estate and also help in cracking down on benami properties. “Seeding Aadhaar to property transaction is a great idea but I’m not going to make an announcement on that. We are already linking Aadhaar to bank accounts, etc, and we can take some additional steps for property market also,” he said. Prime Minister Narendra Modi has indicated several times that the government would crack down on benami property. Aadhaar linkage could be one part of that drive. Puri is the first union minister to confirm that Aadhaar linkage with property transactions would indeed be made mandatory.

Government To Bring Legislation To End Triple Talaq This Winter Session: The Union government is planning to bring in legislation to ban instant triple talaq in the winter session of Parliament. It aims to provide a legal framework to prosecute Muslim men calling off marriages using a custom outlawed by the Supreme Court. Government sources said on Tuesday that the Narendra Modi government had set up a ministerial panel and will either bring a new law or amend existing provisions to ban talaq-e-biddat and punish those practising it. The Supreme Court on 22 August, in a majority judgement, had set aside the practice of talaq-e-biddat among Muslim husbands. It is learnt that in order to give effect to this order of the SC, the government is taking the matter forward and is considering to bring about a suitable legislation or amending existing penal provisions which shall make instantaneous triple talaq an offence.

Winter Session Of Parliament In December, Says Ananth Kumar: Rejecting Congress party’s claims of delay, Parliamentary Affairs Minister Ananth Kumar said on Tuesday that the winter session of Parliament will be called in December and its dates will be announced soon, while citing precedents during the Congress-led United Progressive Alliance (UPA) rule. Kumar said that the opposition party is suffering from “selective amnesia” as during the UPA rule, the winter session was held in December in 2008 and 2013. “Usually, care is taken not to overlap the parliament session with assembly elections. It has been done so in the past also,” he said when asked about the Congress’ accusation that the government was sabotaging the winter session. On Monday, Congress president Sonia Gandhi had accused the government of sabotaging the winter session of Parliament. Asserting that Narendra Modi government is committed to parliamentary democracy, Kumar said, “The winter session will be held in the month of December and dates will be announced soon.”

Indian Trains To Go All Electric Soon, Says Piyush Goyal: Diesel-run trains will soon become a thing of the past with the government’s plan to phase out diesel locomotives and replacing them with electric engines, Railways Minister Piyush Goyal said on Tuesday. This move will help the country reduce carbon emissions and the railways save crores of rupees annually, he said. "We have planned to switch all trains to be electric-driven in the next five years," Goyal said, addressing the National Executive Council members of Federation of Indian Chambers of Commerce and Industry. The national transporter is targeting to electrify the remaining 30,000 kilometres of rail lines in the next five years, at an expected cost of Rs 30,000-35,000 crore. By phasing out diesel locomotives, the Railways will save about Rs 11,500 crore annually, he said. "The diesel locomotives will be used for back up purposes in the yards," Goyal said.

Jayant Sinha Hints At Opening 92 New Flight Routes In Northeast: Minister of State for Civil Aviation, Jayant Sinha, said on Tuesday that 92 new flight routes will be opened in the Northeast to provide a major boost to air connectivity in the region as part of the second round of the government’s ‘Udaan’ scheme. “With this bidding round, we have 92 new routes that are going to be started in the north-east,” Sinha said. Udaan is a regional connectivity scheme under which the government plans to provide connectivity to remote areas and enhance access in under-served regions. The scheme has enabled the government to add 30 new airports on the aviation map in tier-2 and tier-3 cities under the first round. He also announced a direct bi-weekly Air India flight from Delhi to Imphal from January next year, which he said would be made a daily service when the demand picked up. Indigo would soon start services from Guwahati to Silchar and Aizwal, he said. He also announced that Spicejet would be procuring seaplanes that could seat 9-10 passengers and land on smaller airstrips.

No Clash Between 'America First' And 'Make In India': Ivanka Trump: Ahead of her maiden visit to India for the Global Economic Summit in Hyderabad, Ivanka Trumpa, adviser to US President Donald Trump, said on Tuesday that “America First” and ''Make in India'' are not mutually exclusive or contradictory. "America First is not at the exclusion of rest of the world… most governments prioritise people of their country, but that is not in a vacuum," she said in a conference call previewing the visit, while maintaining that the Trump administration believed in strong engagement and collaboration with India to grow economies of both countries. "This year's Global Entrepreneurship Summit is testament to strong partnership between India and US," the Presidential adviser said in an upbeat assessment of economic and security ties between the two countries, despite differences on issues such as movement of people, trade imbalance, and visas.

Sharapova Named In India Luxury Housing Fraud Probe: Tennis champion Maria Sharapova is being investigated in India for cheating and criminal conspiracy after a luxury housing project she endorsed fell through. Piyush Singh, a lawyer representing one of the buyers, said that police had filed initial charges of cheating and criminal conspiracy against Sharapova as part of a wider case against the firm Homestead Infrastructure Development. "Any celebrity who endorses any product technically becomes an agent for that company. No one would have invested in the project if Sharapova's name was not there," said Singh. The project in Gurgaon was supposed to be ready in 2016 but, Singh said, construction work was abandoned after builders collected millions from homebuyers. The former world number one made almost $30 million in 2015, according to Forbes, with $23 million of that coming from endorsements like the project in Gurgaon.

Robert Mugabe Steps Down: Robert Mugabe resigned as Zimbabwe’s president on Tuesday a week after the army and his former political allies moved against him, ending four decades of rule by a man who turned from independence hero to archetypal African strongman. “I have resigned to allow smooth transfer of power. My decision to resign is voluntary on my part. Kindly give public notice of my decision as soon as possible,” Mugabe wrote in the letter. Mugabe is the only leader Zimbabwe has known since a guerrilla struggle ended white-minority rule in the former Rhodesia. The army seized power after Mugabe sacked Emmerson Mnangagwa, ZANU-PF’s favourite to succeed him, to smooth a path to the presidency for his wife Grace, 52, known to her critics as “Gucci Grace” for her reputed fondness for luxury shopping.

The Case For Flexible Fiscal Targeting: Higher fiscal deficit for an economy means increased government borrowing, which in turn implies higher interest burden. Following a fiscal deficit target irrespective of circumstances could have an adverse impact on developmental expenditure.

The Future Lies In Brain-Intensive, Not Labour-Intensive, Industries: Broadly, the future of the world – and of India – lies more in services than in manufacturing, and more in brain-intensive than labour-intensive areas. The big agenda should be to develop a workforce that is agile and can shift from one task to another depending on how the winds of technical change blow.

Sharing Economy: Creating Opportunities In The Digital Era: Companies around the world are developing a wide variety of platforms that permit users to gain temporary access to assets. The economic and business rationale for sharing is strong, both for start-ups and incumbents.