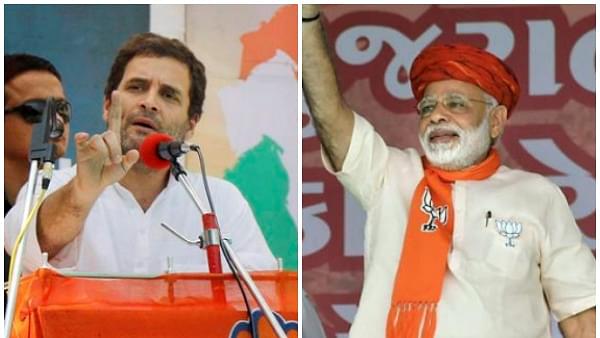 Gujarat Assembly Elections: Voting For Second Phase Today: Polling for the second phase of Gujarat assembly elections will be held today (14 December) after the high-voltage campaign. Voting will begin at 8am in 93 out of 182 assembly constituencies across 14 districts in northern and central regions of the state. A total of 851 candidates are in the fray for 93 seats in the final phase of the Gujarat polls, where 2.22 crore people are eligible to exercise their franchise. The Gujarat Assembly elections, being viewed as a precursor to the 2019 Lok Sabha polls, are a prestige battle for Prime Minister Narendra Modi, who helmed the campaign for the ruling BJP in his home state, and a litmus test for Congress president-elect Rahul Gandhi, who spearheaded the campaign for the grand old party.

Modi To Commission Kalvari: India's first Scorpene class submarine, Kalvari, will be commissioned into the Navy by Prime Minister Narendra Modi today. Modi will undertake a visit of the submarine after commissioning it at the Naval Dockyard in Mumbai, in the presence of Defence Minister Nirmala Sitharaman and senior naval officers. The Mazagon Dock Shipbuilders delivered Kalvari on 21 September to the Navy after successfully completing all trials. The submarine is equipped with state-of-art technology, including superior stealth features such as "advanced acoustic silencing techniques", low radiated noise and the ability to launch a crippling attack on the enemy using precision guided weapons. "The attack can be launched with both torpedoes and tube launched anti-ship missiles, while underwater or from surface," according to manufacturer. Kalvari marks a generational shift in submarine operations.

Election Commission Notice To Rahul Gandhi For Violating Model Code: A show cause notice was issued to Congress president-elect Rahul Gandhi by the Election Commission of India for "prima facie" violating the model code by giving interviews to TV channels in Gujarat where polls are due today. The election watchdog also asked its officials in Gujarat to file a first investigation report against regional news channels who aired the interview on Wednesday. The second round of polls will take place on 14 December. According to the EC directive, the chief electoral officer of Gujarat has been asked to initiate necessary action, following violation of Section 126 (1) (b) of The Representation of the People Act, 1951, by regional channels that aired the interview. The model code of conduct places a bar on directly addressing voters or influencing them after the end of the campaigning phase.

New Deadline To Link Aadhaar With Bank Accounts: The Union government on Wednesday extended the deadline for linking Aadhaar with bank accounts by three months. The linkage now needs to be completed by 31 March 2018. "It has been decided by the Government to notify 31st March, 2018 or six months from the date of commencement of bank account based relationship by the client, whichever is later, as the date of submission of Aadhaar number & PAN or Form 60 by the clients to the reporting entity," a tweet by the Ministry of Finance said. The decision effectively means that for existing bank accounts, which are more than six months-old, the deadline is 31 March 2018. On the other hand, for accounts opened after 1 October 2017, the deadline will be six months from the date of opening the account. Last week, the deadline for linking PAN with Aadhaar too was extended by three months to 31 March 2018.

Indian Railways Sets Up Panel To Review Flexi-Fares: The Railway Board has started a process of reviewing the flexi-fare system in premium trains. A six-member committee has been constituted on the directions of Railway Minister Piyush Goyal to review flexi fare and how it affected passengers and Railways revenue. The committee will submit its report in 30 days. The committee will also recommend if modifications or amendments can be brought to the flexi-fare system to offer passengers flexibility of rates during peak season, lean season or during week days or weekends or during festivals. The flexi-fare system, launched in September 2016, led to up to 50 per cent increase in fares. Under the formula, base fares increase from 10 per cent to 50 per cent with every 10 per cent of berths booked. While revenue increased, the railways lost passengers as several berths remained vacant, officials said.

Pakistan Rejects India's Plea For Consular Access To Jadhav At ICJ: Pakistan on Wednesday rejected India's appeal for consular access to death row prisoner Kulbhushan Jadhav at the International Court of Justice (ICJ). Jadhav, 47, was sentenced to death by a Pakistani military court on charges of espionage and terrorism in April, following which India moved the ICJ in May. The ICJ halted his execution on India's appeal pending the final verdict by it. Pakistan said that Jadhav is not an ordinary person as he had entered the country with the intent of spying and carrying out sabotage activities. Islamabad claimed that New Delhi wants the access to get the information gathered by its "spy". India, however, maintains that Jadhav was kidnapped from Iran where he had business interests after retiring from the Navy. Last week, Pakistan granted permission to the mother and wife of Jadhav to meet him on 25 December.

Fed Raises Key Interest Rates: As anticipated, the US Federal Reserve has raised interest rates by a quarter of a percentage point, but left its rate outlook for the coming years unchanged even as policymakers projected a short-term acceleration in US economic growth. “Economic activity has been rising at a solid rate ... job gains have been solid,” the Fed’s policy-setting committee said in a statement announcing the federal funds rate had been lifted to a target range of 1.25 per cent to 1.50 per cent. The move, coming at the final policy meeting of 2017 and on the heels of a flurry of relatively bullish economic data, represented a victory for a central bank that has vowed to continue a gradual tightening of monetary policy. Having raised its benchmark overnight lending rate three times this year, the Fed projected three more hikes in each of 2018 and 2019 before a long-run level of 2.8 per cent is reached.

Is WTO Working For India And China? At WTO Buenos Aires summit, India expressed its disappointment over the US reneging on a commitment made two years ago to deliver a solution to food security for addressing hunger in some of the poorest countries of the world.

The More The Merrier For India: Notwithstanding criticism from different quarters of the utility of some of the groupings India is an active participant in, in each of the formations, New Delhi hopes to achieve its desired goals while maintaining its long-standing view of strategic autonomy in foreign policy.

Churn In Human Rights Space A Welcome Sign: In 2013, the UK government issued a clarification of the UK’s Companies Act 2006 to ensure ‘that company directors will include human rights issues in their annual reports. A continuous churn in the human rights space is leading some countries to make an effort to integrate human rights into corporate practice.

A Slew Of Setbacks For India In The Neighbourhood: New Delhi has to completely change its outlook and approach towards its neighbours and start wooing them aggressively if it is to avoid the peril of being reduced to a bit player in its own neighbourhood.