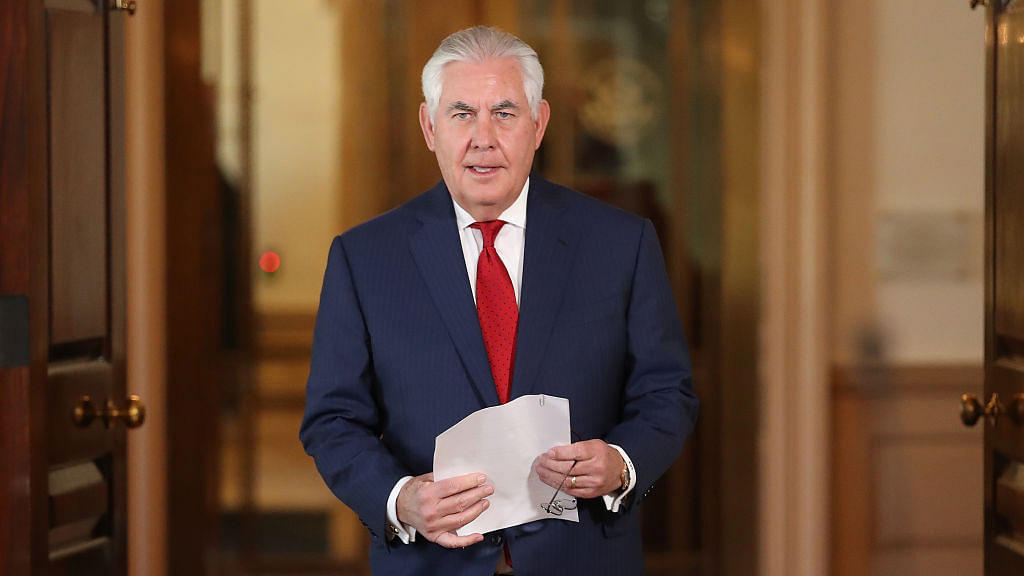 US Secretary of State Rex Tillerson walks to a podium before making a statement at the State Department in Washington. (Win McNamee/GettyImages)

US Is India’s Reliable Partner, Says Tillerson: American Secretary of State Rex Tillerson said on Wednesday that the US is India's "reliable partner", sending a strong message to support India amidst China's "provocative actions" in the region. In a major India-policy speech, the first by the Donald Trump administration, Tillerson, who is scheduled to visit India next week, referred to the rise of China, saying its behaviour and action is "posing a challenge to the rules-based international order". "In this period of uncertainty and angst, India needs a reliable partner on the world stage. I want to make clear: with our shared values and vision for global stability, peace and prosperity, the US is that partner," Tillerson said. He also said the US expects Pakistan to take “decisive action against terrorist groups” based on its soil.

Major Decline In Indians Looking For Jobs In US-UK: Volatile political situations – US President Donald Trump's anti-immigration stance and Britain's exit from the European Union last year – have also made Indians look for jobs in their home country. There has been a 38 per cent and 42 per cent drop in Indians looking to move to the US and UK respectively in the last one year (September 2016 to October 2017), compared to the corresponding previous year, data from job site Indeed showed. Overall, there has been a 5 per cent decrease in Indians looking to move abroad in search of job opportunities, the report added. The reverse job search to India has seen an uptick, with a 25 per cent rise in people from the UK, the report said. The trend was even more pronounced for the Asia-Pacific region, with a 170 per cent increase in interest in moving to India.

Railways Told To Carry Oxygen Cylinders On All Trains: The Indian Railways was told by the Supreme Court to keep oxygen cylinders in all trains to ensure that the life-saving gas could be provided to travellers suffering from respiratory problems in case of emergency. The court passed the order on an appeal filed by the Centre challenging the Rajasthan High Court's order directing the railways to provide a team of one medical officer, one nurse and one attendant in all long-distance trains to cater to the medical needs of passengers. A bench of Chief Justice Dipak Misra and Justices A M Khanwilkar and D Y Chandrachud also directed the railways to take assistance of doctors from All India Institute of Medical Sciences to explore ways to put in place a system in moving trains to provide medical treatment to travellers if they take ill.

Battle Lines Drawn For Himachal Pradesh Assembly Polls: Battle lines are being drawn for the 9 November assembly elections in Himachal Pradesh. Hours after the Bharatiya Janata Party (BJP) named all of its 68 candidates for the polls, the incumbent Congress also named 56 candidates on Wednesday. These included chief minister Virbhadra Singh from Arki constituency in Solan district, and state unit chief Sukhvinder Singh Sukhu from Nadaun in Hamirpur district. The BJP has preferred to retain old faces – sitting legislators as well as candidates who lost the 2012 elections by a whisker. The BJP has a strength of 29 in the 68-member legislative assembly. The party has given tickets to 26 sitting legislators this time, replacing B K Chauhan in Chamba, Govind Ram in Arki and Anil Dhiman in Bhoranj. The party also decided to give tickets to 26 old faces who lost the 2012 elections.

Diwali Gift For Soldiers From Communications Ministry: India on Wednesday announced reduced call rates for the armed and para-military forces on Digital Satellite Phone Terminal (DSPT) to ensure that they can speak to their loved ones for "longer durations". "It's a Diwali gift from the ministry to soldiers. They can now talk to their families for longer durations without worrying about the charges,"Communications Minister Manoj Sinha said. Earlier, soldiers paid a monthly sum of Rs 500 and Rs 5 per minute as call charges on most connections on DSPT. "Starting tomorrow, the monthly charge on DSPT will be completely discarded. For phone calls, instead of Rs 5 per minute, soldiers will now have to pay Re 1 per minute," the minister added.

Gold Prices Surge To Three-Week High: Gold prices surged by Rs 290 to a three-week high of Rs 31,000 per 10 grams on the eve of Diwali at the bullion market on Wednesday. This was due to increased buying by local jewellers to meet the festive demand. Silver held steady at Rs 41,000 per kg in limited deals from industrial units and coin makers. Bullion traders said increased buying by local jewellers, driven by Diwali festival demand in domestic spot markets, mainly led to rise in gold prices. Globally, the yellow metal fell by 0.12 per cent to $1,283.20 an ounce and silver by 0.06 per cent to $16.98 an ounce in Singapore. In the national capital, gold of 99.9 per cent and 99.5 per cent purity surged by Rs 290 each to Rs 31,000 and Rs 30,850 per 10 grams respectively, a level last seen on September 27.

George Saunders Wins Man Booker Prize: American author George Saunders has won Man Booker Prize for this year for his first full-length novel Lincoln in the Bardo. He has become only the second American writer to win this award. Saunders, 58, described the award as a "great honour, which I hope to live up to with the rest of my work, for the rest of my life." In a lengthy and varied writing career, Saunders has penned award-winning short story collections, essays, illustrated fables and a bestselling children's book, as well as many pieces of journalism. "The form and style of this utterly original novel reveals a witty, intelligent, and deeply moving narrative," said Lola Young, chair of the judging panel, in announcing the prize at a ceremony in London. In 2006, he was awarded both a Guggenheim Fellowship and a MacArthur Fellowship, while in 2009 he received an Academy Award from the American Academy of Arts and Letters.

Finding A Goldilocks Policy Interest Rate: The slide in private investment and growth is not just a cyclical problem easily reversible by simply lowering the repo rate; it is also a challenging structural problem. Too high, too low or just right? The question has been approached from two distinct perspectives in economic theory: normative economics and positive economics.

Regulating The Disruption Wave: RBI Issues Directions To Govern P2P Platforms: RBI has restricted the aggregate exposure (across all P2P platforms) of each lender and borrower to Rs 10 lakh, and limited the exposure of a single lender to a single borrower to Rs 50,000. RBI’s directions will severely restrict the business potential of NBFC P2Ps, unless they are able to bring on many more borrowers and lenders onto the platform.

When Women Decide To Speak Up: The sexual harassment incidents against women in the workplace or in society are so frequent that they seem commonplace and routine, as if what’s happening is natural. #MeToo is not a joyous desire to join any exclusive club, it is to tell the world of sexual harassment that women face so frequently that they seem commonplace.

A Possible Link Between Pyongyang And Doklam: It is no longer in China’s interest to play cat-and-mouse while North Korea does its dirty work with respect to the US. Once we understand China’s limitations vis-à-vis North Korea, the diversionary role of Doklam (and other such missions) in Xi Jinping’s strategy becomes clear.

1.7 Lakh Lamps In Ayodhya To Welcome Rama, Mandir To Follow Soon? Arrival of stones from Rajasthan at Karsewakpuram expected to resume soon and number of artisans to be deployed for carving also expected to increase after the festive season.