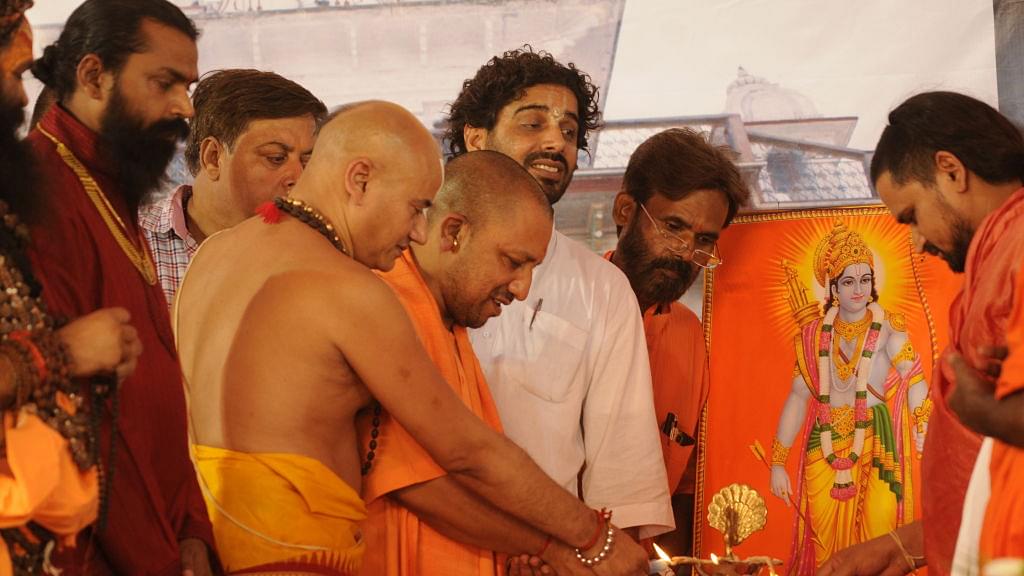 With the Supreme Court scheduled to start daily hearing of the Ram Janmabhoomi case from December 5, the government of Uttar Pradesh has seemingly stepped up efforts for a strong cultural revival centred around Rama and his epic, prior to the much promised grand Ram temple at Ayodhya.

Elaborate plans are in place at Ayodhya to celebrate the return of Rama from Lanka after slaying Ravana, and put the holy city on the cultural map of the state as an important tourist destination.

In a Treta yuga redux of the victors returning to Ayodhya in the mythological Pushpak aircraft, Rama and Laxman --- along with Sita, Hanuman and Sugreev --- took off in a helicopter from the Faizabad airstrip and land at a helipad at Ram Katha Sthal, near the Ram Katha Park.

In a ‘never before’-like celebration of Diwali, Ramalila will be performed by artistes from Indonesia, Nepal and Sri Lanka at the Ram Katha Park which would be shown to people unable to reach the venue through hologram technology.

Parallel to these events, Ayodhya was preparing to book a spot in the Guinness Book of World Records by lighting 1.71 lakh diyas, earthen lamps, at Ram ki Paudi where a Saryu aarti would be performed. Prof Manoj Dixit, vice-chancellor of Awadh University, who was supervising the arrangements under the watch of two officials from Guinness, said that they would try to light 2 lakh earthen lamps using 11,000 litres of sesame oil and 850 kg of camphor.

“To facilitate easy counting, the earthen lamps were being kept in batches of five-ten” he explained the process. It was realised, he said, that the place which was originally chosen for placing the earthen lamps was not big enough to accommodate all the diyas “so we have now extended it to include more parts of adjacent area”.

Many see in the push being given to Ayodhya, for the development of which the government has earmarked Rs 133 crore, a political message before the 2019 Lok Sabha polls and the local bodies’ elections to be held in November.

The seers in Ayodhya, which was witnessing a special attention after years of neglect, may not be satisfied with the current buzz as they await the construction of Ram temple and not a 100-foot tall statue of Ram, as proposed by the state government, for which the Shias have said they will give ten silver arrows.

While the arrival of stones from Rajasthan at the Karsewakpuram was expected to resume soon after the monsoon gives way fully, the number of artisans to be deployed for carving was also expected to increase after the festival season.

The BJP and VHP leaders have exuded confidence that construction of the Ram temple would start before the 2019 elections, whether or not the Supreme Court judgment was in their favour. “If the verdict is in our favour then there won’t be any issue. We will rely on a negotiated settlement if it is not. Shias have already extended their support and many Sunnis too were now in favour of the temple. But if all these efforts fail then the government should pass a law in parliament for the construction of Ram temple,” Mahant Ram Vilas Vedanti, member of the Ram janmbhoomi Nyas and former MP told mediapersons at Ayodhya.