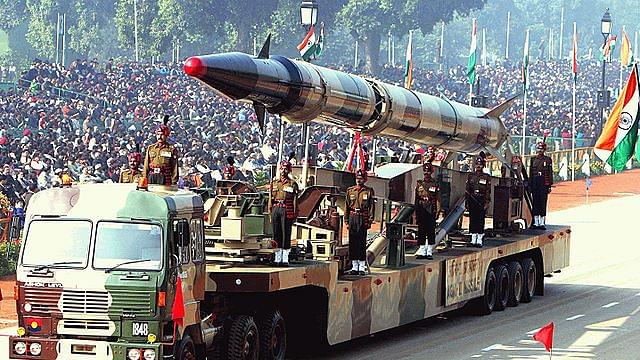 India displays its military might during Republic Day parade. (GettyImages)

SC To Hear Plea On Scrapping Article 370: Bringing the focus back on an issue that has confronted lawmakers and the judiciary for decades, the Supreme Court on Tuesday sought a response from the Union government on a plea against a Delhi High Court order by which it had rejected a petition challenging validity of Article 370 of the Constitution giving special status to Jammu and Kashmir. A bench headed by Chief Justice J S Khehar issued notice to the Centre and sought its reply within four weeks. The petitioner in High Court, Kumari Vijayalakshmi Jha, had claimed that the issue raised before the high court was different from the matter, which was put before the apex court. She had contended that Article 370 was a temporary provision that had lapsed with the dissolution of the state's Constituent Assembly in 1957.

Justice Dipak Misra Named Next CJI: Justice Dipak Misra was on Tuesday named as the next Chief Justice of India (CJI). The President has cleared Misra's name as the 45th CJI. Misra will take over from Justice J S Khehar, who retires on 27 August. Justice Misra, 63, has been a part of several key verdicts, such as sending Mumbai blasts convict Yakub Memon and four men who raped and killed a physiotherapy intern to the gallows. Justice Misra, who was enrolled as an advocate in 1977, had practised in constitutional, civil, criminal, revenue, service and sales tax matters in the Orissa High Court and tribunals before being elevated to the High Court bench. In 2009, Justice Misra became the Chief Justice of the Patna High Court and assumed charge as the Chief Justice of the Delhi High Court in May, 2010. He was appointed a Judge of the Supreme Court of India on October 10, 2011.

Ahmed Patel Re-Elected To Rajya Sabha: Senior Congress leader Ahmed Patel on Wednesday scraped through to notch a victory in a bitterly-contested Rajya Sabha election. Patel, 68, the powerful political secretary to Congress President Sonia Gandhi, is said to have secured 44 votes defeating Congress defector Balwantsinh Rajput. The other two successful candidates in the election were Bharatiya Janata Party president Amit Shah and Union Minister Smriti Irani. The morale-boosting victory came after days of intense tussle between the two sides for each vote and on a day of dramatic developments which saw Election Commission of India rejecting the votes of two Congress MLAs who voted for BJP.

West Bengal Passes State GST: The West Bengal Assembly on Tuesday passed the state goods and services tax (SGST) Bill, 2017, even as Chief Minister Mamata Banerjee said her party ideological position on GST would not alter. “The common people are facing problems and since we (Trinamool Congress) value democracy the party will stand behind the masses,” she said speaking in the Assembly after the passing of the Bill. The state had issued an ordinance in June end to facilitate treasury operations by government from 1 July, the date of implementation of the new tax regime across the country. The Chief Minister reiterated that her government was against the hasty implementation of GST, and had earlier asked the Centre to defer it by one or two months. Banerjee also said taxes on many items have been lowered, after state Finance Minister Amit Mitra raised objections at GST Council meetings.

SC Rejects Plea To Make Yoga Compulsory In Schools: The Supreme Court on Tuesday dismissed a plea, which had sought to make yoga compulsory in schools across India. The court said that it was not for them to design curriculum for schools and that the government, with its experts, were the right forum to do it. "There is indeed a fundamental right to education but there is no fundamental right to do Yoga under this right," observed the bench led by Justice Madan B Lokur. The bench added: "We can't decide what is to be taught... that's for the government to do." The court said it was not possible for it to grant the relief as sought by petitioners – Ashwini Kumar Upadhyay, a lawyer and Delhi Bharatiya Janata Party spokesperson and J C Seth.

Government Plays Down Automation Job Losses Fears: Following a release of a report by the World Bank which speculated that automation threatens 69 per cent jobs in India, the Union government on Tuesday said that job loss through automation in India should not be a matter of concern as the "growth momentum" of the economy will result in new job opportunities. Minister of State for Finance Arjun Ram Meghwal said employment generation has been one of the most important priorities of the Narendra Modi government. Meghwal said that the report "inter alia also states that 'even if technologically feasible, large-scale net job destruction due to automation should not be a concern for most developing countries in the short term.” "Even in medium to long term growth of Indian economy of over 7 per cent and steps being taken to enhance the growth momentum will result in further creation of new job opportunities and absorption of replaced labour, if any," he said.

Trump’s New Threat To North Korea: President Donald Trump has vowed to respond to North Korea with “fire and fury” if it makes any more threats to attack the United States. "North Korea best not make any more threats to the United States. They will be met with fire and fury like the world has never seen," Trump said. Earlier Pyongyang said it was ready to teach Washington a "severe lesson" with its strategic nuclear force in response to any US military action. Washington has warned it is ready to use force if need be to stop North Korea's ballistic missile and nuclear programmes but that it prefers global diplomatic action, including sanctions. The UN Security Council unanimously imposed new sanctions on North Korea on Saturday over its continued missile tests that could slash the reclusive country's $3 billion annual export revenue by a third.

Consolidation May Not Ne A Panacea For Banks’ Woes: A merger of two weak banks does not lead to one strong bank in the near term. On the contrary, a weak bank merged with a similar-sized strong bank may weaken consolidated credit profile. The proposed PSBs consolidation would thus be a material event, monitored closely.

RBI’s Studied Silence Over External Vulnerabilities: A rush of foreign currency has forced RBI to take steps which have disappointed overseas debt markets and investors. Critics are questioning the wisdom of the RBI after a 25 basis point reduction in benchmark interest rates fell short of capital market expectations.

RTE’s Heart Is In The Right Place — But Not Its Head: The RTE Act has proved to be a disastrous piece of legislation. Scrapping the no-detention policy, one of the most controversial features of the Right to Education Act, is a first step towards mitigating some of its worst consequences.

Privacy And The ‘Nothing To Hide’ Argument: It was argued on behalf of the state of Gujarat in the Supreme Court that privacy claims are only made by those who have done something wrong. The argument wrongfully equates privacy with secrecy, even though the former is a distinct and much richer concept.

Kannada Diktat To Banks Is Broadly In Right Direction, But It’s Not Enough: If the state government, which is making much of its pro-Kannada leanings, really means what it says and is not using the emotive issue only to win the next assembly elections, it must put its money where its mouth is.