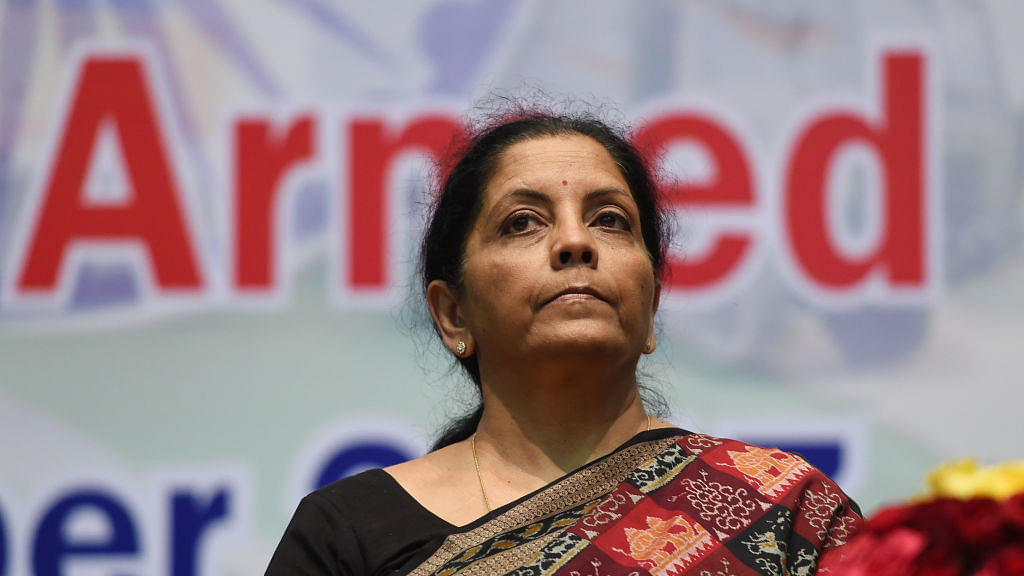 Defence Minister Nirmala Sitharaman speaks during an event at the Defence Research and Development Organisation in New Delhi. (MONEY SHARMA/AFP/GettyImages)

Strengthening Armed Forces Top Priority, Says Sitharaman: Strengthening armed forces on ‘all fronts’ is a top priority for the government, Defence Minister Nirmala Sitharaman said on Sunday. “We should be prepared to deal with security challenges without discussing who is a stronger enemy – China or Pakistan. Our defence forces need to be completely prepared. We need to fill the gaps and the government is committed to strengthening the armed forces,” she said. There would not be any lack in efforts on the part of the government to strengthen the defence forces, she said. On the issue of terrorism in Jammu and Kashmir, she said that the government was making all efforts to counter terrorism in the state. The Union government was closely working with the state government to counter terrorism and the local police were doing good work in dealing with the issue, Sitharaman said.

Centre Set To Bring Draft Model Law On Contract Farming: The Union government is set to come out with a draft model law on contract farming later this month, which is seeking to protect farmers from price volatility by ensuring guaranteed price for their produce. "Idea of the contract farming law is to protect farmers from price volatility, particularly in perishable items. Such a law will protect farmers from market fluctuations as it will ensure assured and better price of agricultural and horticultural produce to them through advance agreements," said a member of the committee, headed by senior IAS officer Ashok Dalwai, which has been working on the draft. The move to bring a model contract farming Act was announced by finance minister Arun Jaitley in his budget speech.

New Policy To Shoot Down Hostile Drones: The Union government is finalising a policy under which National Security Guard (NSG) and Central Industrial Security Force (CISF) may be given powers to shoot down “rogue” low-flying objects like drones and gliders. The two forces will acquire defence mechanism like electromagnetic system, which would have inbuilt radar, radio frequency jammer and detector. A Home Ministry official said that a draft policy on operating low-flying, pilot-less objects will come up soon to deal with elements which could carry out terror attacks using drones, gliders, besides others. The policy is being formulated after spotting of several UAVs in airports and border areas, hampering air traffic and raising security concern.

Mohan Bhagwat Proposes Reforms in Judiciary: Rashtriya Swayamsewak Sangh (RSS) chief Mohan Bhagwat on Sunday proposed reforms in India’s judiciary, stressing the need to incorporate “ethos of the society” into the legal system. “Our constitution was written based on the understanding of the ‘Bharatiya’ ethos of our founding fathers, but many of the laws that we are still using are based on the foreign sources and that laws were made as per their thinking...seven decades have passed since our independence...this is something we must address,” he said while addressing a meeting at the Akhil Bharatiya Adhivakta (Advocates) Parishad in Hyderabad. Bhagwat demanded that the entire system be based on the ethos of the society. Calling on to utilise the wisdom of “our seers”, Bhagwat said the “Neeti Shastra” has a lot to offer which modern day law-makers should take a leaf out of.

New Telecom Policy Pushes For Affordable Internet Access: Expected in March 2018, the new telecom policy will focus on providing affordable internet access to 1.3 billion Indians. “Internet to all will be the basic principle and to give a boost to telecom manufacturing would be a key factor of the new telecom policy,” Telecom Minister Manoj Sinha said. The policy will address sector issues and make them future-proof with the onset of disruptive technologies such as fifth generation and artificial intelligence. “The new policy will be forward-looking and current challenges of new technologies such as Internet of Things (IoT) and artificial intelligence will be taken care of,” Sinha added. The government’s ambitious Digital India programme, with an initial outlay of Rs 1.13 lakh crore, hinges on data connectivity and aims to bring 100 per cent tele-density, high-speed internet highways and delivery of citizen centric services electronically.

Call For Action Against Fake Babas: The apex body of Hindu sadhus on Sunday released what it said was a list of 14 fake saints even as it demanded a crackdown on “rootless cult leaders”. The move by the Akhil Bharatiya Akhara Parishad (ABAP), which is an umbrella organisation of 13 recognised akharas, or monastic orders, came against the backdrop of a series of controversies surrounding self-styled godmen, including Dera Sacha Sauda chief Gurmeet Ram Rahim Singh who has been convicted of rape. ABAP president Mahant Narendra Giri said that fake babas had ''amassed huge wealth and lived lavishly'' and had brought a bad name to the Hindu religion. He said the ABAP will release another list of 28 fake godmen after Diwali, and appealed to boycott these so-called spiritual gurus.

Farm Insurance Scheme Set For Revamp: Launched just over a year ago, the government’s farm insurance scheme or Pradhan Mantri Fasal Bima Yojana is set for a revamp. It will now focus on increasing competition among insurers, lowering the average premium and widening the scope of cover to include losses due to natural disasters. “There is a need to make agriculture insurance more competitive. This can be done by increasing competition among insurance companies, which in turn will lower the premium charged and thus make it more attractive for farmers,” a senior government official working closely on revamping the scheme said. Prime Minister Narendra Modi had tasked think tank NITI Aayog with suggesting ways to improve the government’s flagship farm insurance scheme.

The Blurring Of Lines Between Indian Languages: The rise of local tongues on the internet will clear the misconceptions that are proving to become obstacles in the course of finding common linkages between Indian languages. Isn’t this a signal for a positive change?

States Should Spend More On Nutrition: India’s record in addressing undernutrition is abysmal. With a stunting rate of 38.4 per cent, India accounts for about a third of the world’s stunted children. Greater fiscal autonomy has not yet translated into higher spending on nutrition by states.

More Data Needed To Evaluate Demonetisation: Demonetisation was a unique event, and hence, drawing inferences based on theory, armchair analysis or even short-term data, could lead to misleading conclusions. To say that demonetisation has completely failed to have an impact on black money would be too premature.

The ‘3-3-3’ Puzzle And What To Do About It: The ‘3-3-3’ puzzle is nothing but a theory that the three richest states in India are three times as rich as the three poorest states. The puzzle deepens because India’s states constitute a federal economic union characterised by harmonised taxes and free trade among states.

NEET: How Dravidian Parties And Fringe Groups Are Endangering The Future Of Tamil Nadu’s Students: The opposition to NEET by Dravidian groups does not have the interest of Tamil Nadu’s students at its heart.