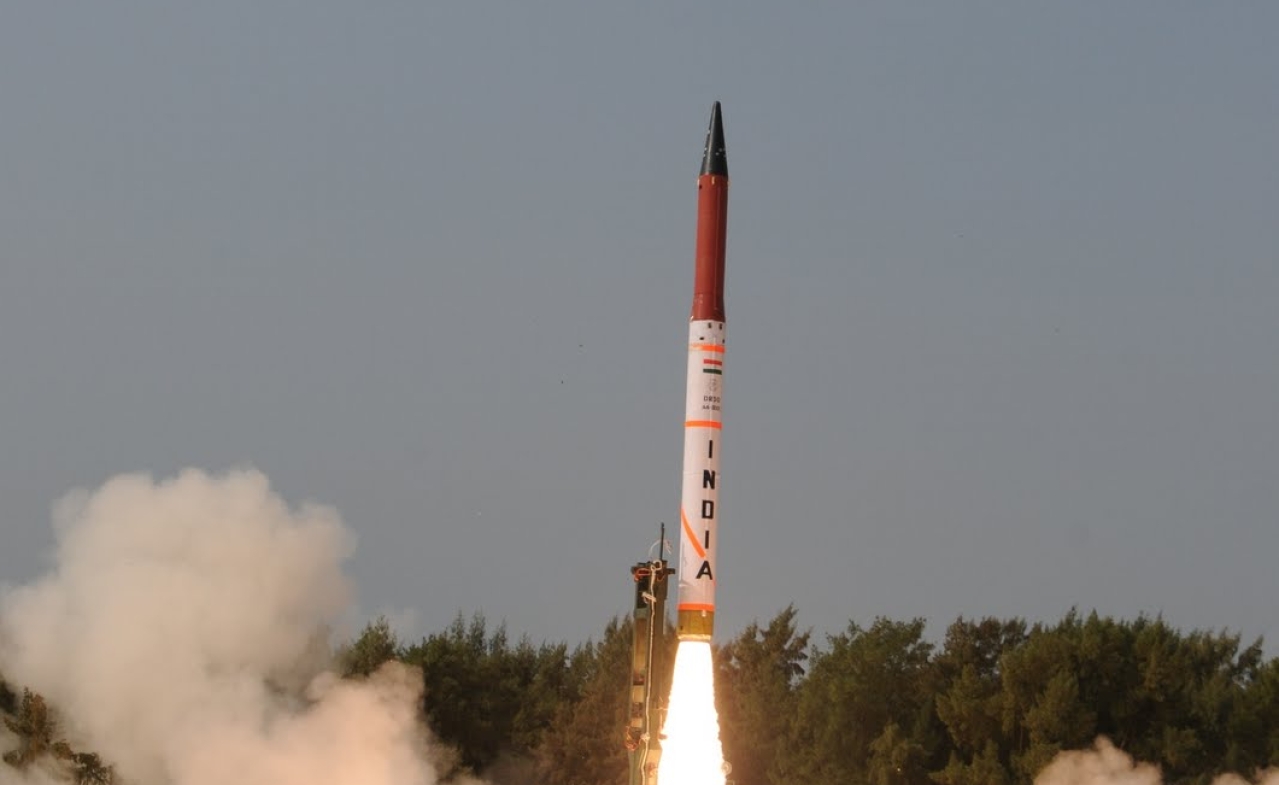 The 2 January 2017 test of the Agni-IV missile will not garner either the headlines or the attention of the 26 December 2016 test of the Agni-V. However, from a practical and strategic standpoint, the Agni-IV represents India’s most viable deterrent weapon against China until the Agni-V enters service.

The Agni-IV entered service with the Strategic Forces Command (SFC) in or around 2014, prior to its first user-associated trial in December 2014. Since that time, it may be assumed that the Agni-IV is in production and given its thus far trouble-free user-trials – three of which have now been conducted – it may also be inferred that the SFC is satisfied with the system and is increasingly comfortable with handling and operating the missile.

How far can it strike ?

The Agni-IV has a revealed range of 4000 km, and represents the successor to the Agni-II. Earlier known as the Agni-II Prime, the Agni-IV is no larger than its predecessor but has a significantly greater range. This reflects a greater use of lighter composites and improved solid-fuel propellants and improvements to the guidance system ensure that even at maximum range, the Agni-IV retains a “two-digit” CEP. The system, being both rail and road mobile, is even more flexible and survivable than the Agni-II. In fact, the Agni-IV is, by virtue of its weight and relative ease of transportation, a versatile delivery system which can be transported more easily than the larger (though much more capable) Agni-V.

It took a few trials to get it right

While its first test in December 2010 was a failure, technical trials on 15 November 2011, 19 September 2012 and 20 January 2014, the latter in full user configuration, were deemed successful. Thereafter, the SFC commenced induction and carried out user trials on 2 December 2014 and 9 November 2015 and thereafter this most recent test on 2 January 2017. It is expected that the Agni-IV will supplement and then completely replace the Agni-II in production and become the mainstay of the Indian IRBM force.

Shanghai and Beijing within range

The combination of road and rail mobility gives unprecedented flexibility to the Agni-IV. It is also noteworthy that there have been persistent rumours of a canister launched version of the Agni-IV being contemplated. As with the Agni-V, a hermetically-sealed canister offers the prospect of keeping the missile ready to fire, with a mated warhead. It is hoped that moves in this direction are taken with alacrity.

With respect to warheads, the Agni-IV seems to be deployed with a fusion-boosted-fission weapon with a yield somewhere in the 150-500 kiloton range. Needless to say, this figure is arrived at by some interpretation of comments, but the well-informed nature of these comments makes them impossible to ignore.

In 2011, in a comment to The Business Standard, Dr. Avinash Chander in 2011 said: “Now we talk of [accuracy of] a few hundred metres. That allows a smaller warhead, perhaps 150-250 kilotons, to cause substantial damage.” Prior to that, in 2009, Admiral Arun Prakash (at the height of the controversy generated by Dr. Santhanam’s statements on the 1998 tests) stated: “In the midst of the current brouhaha, we need to retain clarity on one issue; given that deuterium tritium boosted-fission weapons can generate yields of 200-500 kt, the credibility of India’s nuclear deterrent is not in the slightest doubt.” Needless to say, this is at complete variance with the views of experts such as Dr. Bharat Karnad who are adamant that all India has are 15-20 kiloton yield warheads. However, it should also be noted that the payload of the Agni-IV is around 1000kg which is much too large for a 20-kiloton warhead. A combination of these facts and comments is circumstantial evidence that India has deployed such warheads.

With the Agni-IV now inducted and hopefully being produced in numbers, it is hoped that there will be a little more transparency on the strength of the Agni missile force. It has been suggested that 334 and 335 missile groups which operate the Agni-1 and Agni-II missiles respectively possess 12 TELs each. It has been stated that another group has been raised on the Agni-III, its designation is unknown and whether the TELs are accompanied by vehicles which carry reload missiles is equally unclear. Is there to be another group for the Agni-IV or will existing groups be expanded or modified to accommodate the new missiles? Obviously specific details cannot be revealed but some information should be forthcoming especially as India moves to consolidate its deterrent.