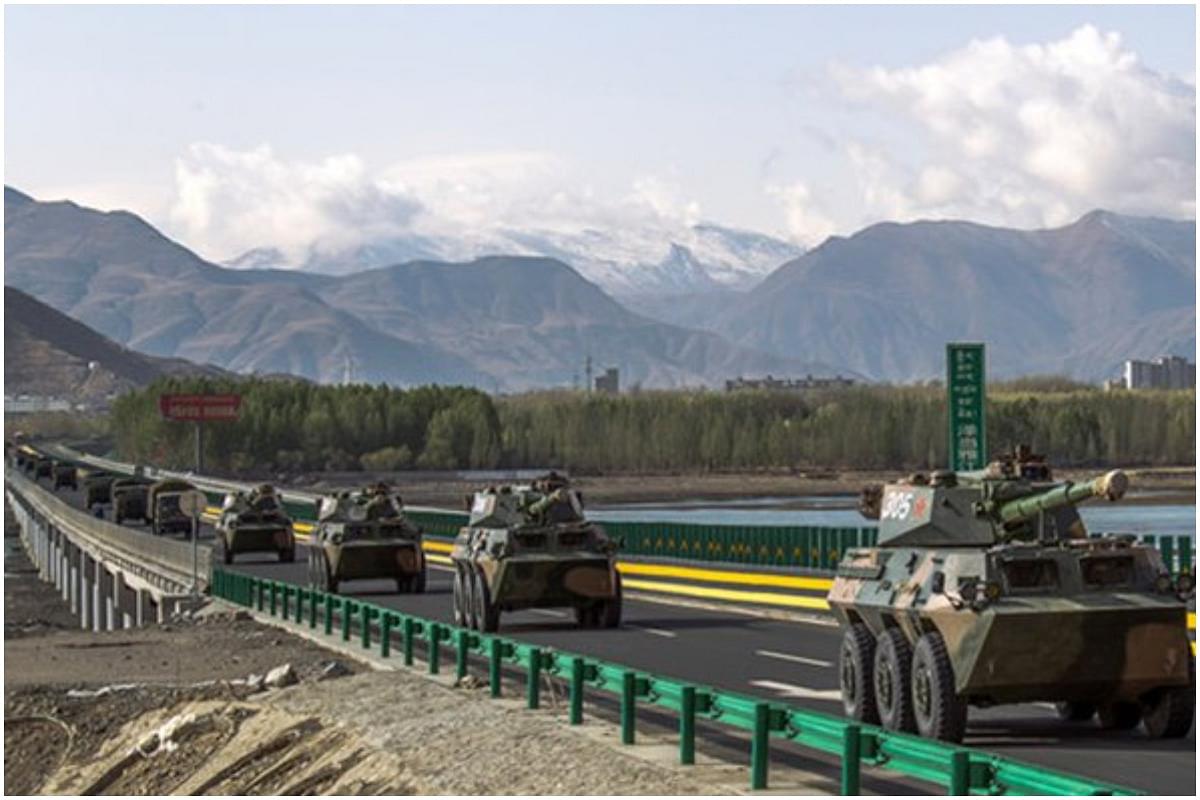 Chinese tanks on a road in Tibet.

In a move that is possibly aimed at conveying its willingness to remain deployed along the frontier with India in large numbers, the People's Liberation Army (PLA) of China has built new troop shelters and fortifications along the Line of Actual Control (LAC) with India.

According to a report based on latest intelligence and surveillance accounts, China has built new modular container-based accommodations for its soldiers at at least eight forward locations along the LAC.

The new shelters have been seen in Wahab Zilga near the Karakoram Pass in the north, and in Piue, Hot Springs, Chang La, Tashigong, Manza and Churup, moving south along the LAC.

These locations have 80 to 84 modular containers arranged in seven clusters.

China has also deployed two batteries of S-400 surface-to-air missiles and other air-defence assets in the region.

Satellite images recently revealed that China is also building a helicopter base in Aksai Chin.

The PLA base is located only 130 kilometres away from the Galwan Valley in north eastern Ladakh, where 20 Indians and dozens of Chinese soldiers were killed in clashes on 15 June last year.

The area it is coming up in is around 147 km away from Daulat Beg Oldi, which hosts an Indian military base, and an airstrip, the highest in the world.

Pangong Tso and Hotsprings, two of the many friction points between India and China in the standoff that began in May 2020, are at a distance of 180 km and 112 km, respectively.

The helicopter bases are a part of a massive infrastructure buildup drive launched by China last year, which includes expansion of airbases near the Line of Actual Control (LAC) to accommodate a greater presence of fighter jets and unmanned aerial vehicles on the Tibetan Plateau.

For instance, at the Ngari Gunsa airbase (which also serves as a civilian airport), located just 200 km away from the Pangong Lake, China is building 12 hardened shelters to shield its aircraft from enemy missiles and bombs.

Recent satellite images (from August this year) show China has been widening and upgrading the road that leads to the areas under its control in the Depsang Plains, where the standoff between the two sides continues with no movement on disengagement in sight.

"..nearly 30 civilian airports have been built or are under construction in Xinjiang and Tibet," a news report on the website of China's Ministry of National Defence, dated 6 September, says.

Infrastructure upgrades have also been underway at the airbases in Hotan, located north of Ladakh, and Shigatse, north of Sikkim.

India, too, has been developing infrastructure in border areas at breakneck pace, and projects in frontier areas are receiving greater attention after the tense standoff with China along the LAC and the clashes in Galwan.

At least 37 helipads are under construction in the Union Territory of Ladakh, reports say, and four new airports capable of handling wide bodied aircraft are being planned.

While the new airports will improve links with bases outside Ladakh, such as the Chandigarh Air Force Station, from where supplies are flown into Leh, the helipads will help in supplying troops deployed in areas difficult to reach by road.

Like China, India has also built adequate infrastructure, including heated housing for soldiers in high-altitude areas. These camps have electricity, water and heating facilities, and special attention has been given to health and hygiene arrangements.