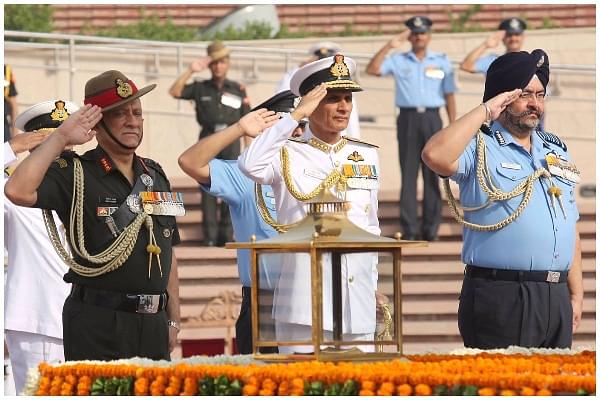 Chiefs of the Army, Navy and the Air Force. (Rajnath Singh/Twitter)

With the government having made an important national security related move by revoking Article 370 and 35A in Jammu and Kashmir just last week, no one was expecting Prime Minister Narendra Modi to make another security-related announcement on the 73rd Independence Day.

However Modi surprised everyone, as he often does, by announcing from the Red Fort that the three defence services — the Army, the Navy and the Air Forces — will soon get a Chief of Defence Staff (CDS) to optimise coordination between them.

The debate on the appointment of a CDS has been on within the Indian defence establishment for decades now. This debate was triggered by the recommendations of the Kargil Review Committee, set up after the war of 1999.

The review committee had found that during the war, especially in the initial days, there was little coordination between the Army and the Air Force — a shortcoming that threatened to prolong the conflict.

A group of ministers, headed by the then deputy prime minister, L K Advani, had echoed the committee’s recommendation. However, lack of political consensus and resistance from the Indian Air Force (IAF) and the bureaucracy, made sure that the proposal did not move ahead.

The debate, however, kept raging. Twelve years after the Kargil conflict, the Naresh Chandra Committee watered down the proposal to appoint a CDS, in view of the resistance from within the defence structure, and suggested a permanent Chairman of the Chiefs of Staff Committee (CoSC).

In 2018, the three services finally agreed in principle on the appointment of a permanent Chairman of the CoSC — midway to a CDS, at best.

But now, it appears, the Modi government has built political consensus for the appointment of a CDS. However, what is not known is if the decision was a top-down one or if the three services finally decided to bite the reform bullet.

How Will Having A CDS Help?

One, a CDS will be a “single point” military adviser to the government.

Two, India’s armed services work autonomously. At present, the senior-most of the three services is appointed as the chairman of the CoSC. The forces have managed to incorporate some level of jointness but it is nowhere close to the level that a modern battlefield with interconnected elements demands.

The CDS, ideally, would be responsible for a military planning in coordination with the Chiefs of Staff and would have to ensure its joint and integrated execution.

The officer would have strategic control over the forces. If this happens, India would be able to bring to bear the combined might of the three armed forces on the enemy in a quick and coordinated manner. The CDS would keep inter-services rivalry in check.

With jointness, the forces will be able to pool military resources, such as bases and transport fleets, reducing the teeth-to-tail ratio.

Three, the officer can take 10,000 foot view of the country’s military requirements and arrive at a formula to meet them in such a manner that operational capabilities of the forces are not compromised to the extent possible and, at the same time, the needs are met with the limited monetary resources at the country’s disposal.

In simple terms, the CDS can prioritise some procurement over others.

In the current set up, each service projects its own needs and the defence secretary --- a bureaucrat with little understanding of operational matters --- acts as the arbitrator. The differences between the Army Aviation Corps and the IAF over the ownership of Boeing AH-64 Apache helicopters is well known.

Four, the CDS can act as an arbitrator when the Chiefs of Staff express divergent views on an issue, such as the use of military resources in the battlefield.

Five, he can act as a link between the Strategic Forces Command that manages India’s nuclear arsenal and the political leadership.

Six, he will be the representative of the forces in security-related committees, such as Defence Planning Committee or the Strategic Policy Group. There’s no doubt that communication would become smooth with this arrangement.

Seven, the tri-service organisations, such as the recently established Defence Space Agency, can be put under the command of the CDS.

But Why Was The IAF Hesitant?

While the IAF’s official argument against the idea of having a CDS is not available in the public domain, it is believed that the service thinks the move will establish the Army’s domination and that it may be reduced to a supporting role.

The Navy has revealed the IAF is also against the creation of joint-theatre commands, the logical next step after the appointment of CDS.

Theaterisation means placing specific units of the army, the navy and the air force under a Theatre Commander in a defined geographical area.

“The IAF can operate from anywhere, given the range of its assets,” Marshal K K Nohwar (retired), currently serving as director general of the New Delhi-based Centre for Air Power Studies, has said, explaining the IAF’s logic. He has argued that the Air Force may lose its flexibility if it were part of a theatre command.

As mentioned, the appointment of a CDS, if successful, may lead to the development of theater commands in the future. Theaterisation has its advantages but the debate among the services on the need for such a move is far from over.

The success of the CDS will depend on the kind of powers the person appointed to the post enjoys. For the CDS to be effective, he would need to have control on the decision-making apparatus.

If the babus in the Ministry of Defence have the power to overrule the CDS, specially in the case of procurement of equipment for the three services, the move may yield low dividends.

The positives that this move may have can’t be ascertained until the government reveals the nuts and bolts of its plan.

Preparing For Battles Of The Future: Chief Of Defence Staff Can’t Just Be A Ceremonial Position

The Trident: Why The Three Services Must Come Together To Create Theatre Commands