How Pakistan Getting Armed Drones From China Affects India’s Security 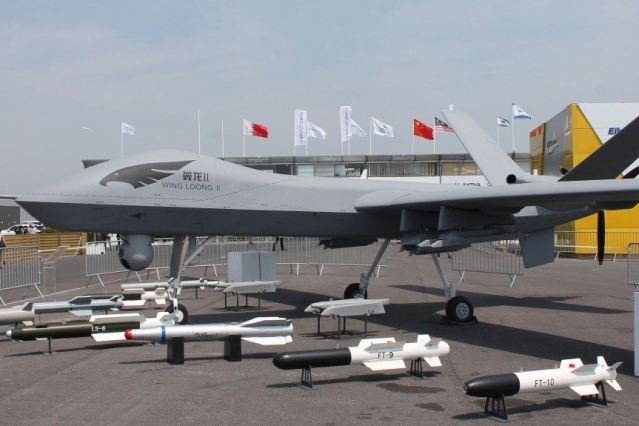 Wong Long-II made its maiden flight in February 2017.

Even before the ink on the agreement signed by India for the purchase of S-400 air defence systems could dry, Pakistan announced that it would procure 48 armed Wing Loong-II unmanned aerial vehicles (UAVs) from China in what would be the latter’s biggest ever drone sale to another country.

Pakistan’s announcement, although unofficial, did not come as a surprise. There were ample signs of it coming. India’s signing of the S-400 deal seems to have given Pakistan a reason to justify the purchase.

Pakistan is believed to have tested an earlier version of the drone, called Wing Loong-I, as early as 2016. A drone, which appeared to be the Wing Loong-I, had crashed near Pakistan’s Alam Air Base, nearly 250 km south-west of Islamabad, in June 2016. It is believed that the Pakistan Air Force (PAF) was conducting a test flight of the strike-capable platform to evaluate its performance.

Using satellite imagery from 24 November 2017, the Center for the Study of the Drone has established the presence of a Wing Loong-I at Pakistan’s Alam Air Base in January 2018. The aircraft can be seen parked outside a hangar at the base. The fact that the aircraft is painted white, not battlefield grey, suggests that the aircraft was a test platform and not an operationally deployed airframe.

IHS Jane’s has also confirmed the presence of the drone in Pakistan citing different satellite images taken at the same time.

This suggests that Pakistan was considering acquiring armed drones from China for a number of years and has tested a few platforms.

The fact that no more Wing Loong-Is have been spotted since indicates Pakistan did not acquire it, at least not in large numbers. Among other reasons, Pakistan may have decided to not go ahead with the purchase of the Wing Loong-I as China unveiled a much advanced version of the strike-capable aircraft, Wing Loong-II, at the Zhuhai Airshow in 2016 and conducted its maiden flight in February 2017.

Wing Long-II is a medium-altitude, long-endurance unmanned aerial vehicle that provides Pakistan a unique edge over India, which does not have full-fledged armed drones. It has a range of 4,000 kilometres, an endurance time of nearly 20 hours, can fly at an altitude of 16,000 feet and carry 400 kg of payload to strike its targets.

In a hypothetical scenario, a Wing Loong-II, flying from Pakistan’s Mushaf Air Base, home to a fleet of Falco surveillance drones produced in collaboration with an Italian firm, can reach as far as the western parts of Bihar and Chhattisgarh, and the northern parts of Maharashtra. If taking off from Pakistan’s Bholari, PAF’s southernmost airbase, a Wing Loong-II can reach as far as Karnataka and Telangana. Therefore, theoretically, the Wing Loong-II will give Pakistan the ability to conduct precision strikes on Indian military, industrial and population centres.

The experience of operating strike-capable Burraq drone, believed to be a reverse engineered version of China’s CH-3 UAV, also comes in handy for Pakistan. Introduced in 2013, Pakistan claims to have used the strike-capable platform against what it calls are terrorists in its tribal areas starting 2015.

That said, penetrating India’s defences will be a challenge for these drones. They will be easy targets for India’s missile defence systems, such as the Israeli-made SPYDER, the indigenously developed Akash and the Indo-Israeli Barak-8 systems. While the Wing Loong-II can fly only up to an altitude of 16,000 feet, these systems, deployed to protect vital installations, can strike targets up to an altitude of over 50,000 feet.

The Russian-built S-400 systems will add more teeth to India’s air defence. Even by conservative estimates, the system can strike enemy targets as far as 240 km away and up to an altitude of over 80,000 feet. Its long-range radar, the 91N6E Big Bird, can see 300 targets at any given time in a range of 600 km, alerting the user of incoming threats. To penetrate the S-400 cover by overwhelming the tracking capability of its radars, Pakistan would need to use a large number of missiles, fighters or drones together. This would prove prohibitively expensive for Pakistan even though it would cost India more to bring them down than it takes Islamabad to buy them.

Therefore, no free run for Pakistan.

However, there are reasons for India to be concerned. The Indian military has been operating UAVs for over a decade but is yet to lay its hands on a full-fledged armed drone. It operates around 100 Searcher Mk II and 60 Heron systems. Some of these, reports say, has been upgraded to undertake strikes but there is no clarity about their capability to strike targets. Development of a combat-capable drone under the Rustom programme is yet to reach the final stage. Efforts to procure strike-capable Heron-TP drones from Israel are yet to materialise. There seems to be no movement on the US’ offer to provide India the armed version of the Guardian drones.

Pakistan, on the other hand, has managed to get armed drones despite its limited budget and lower access to western military equipment.

If India does not up its game — both on the indigenous development and procurement fronts — it risks being left behind Pakistan in the drone race.