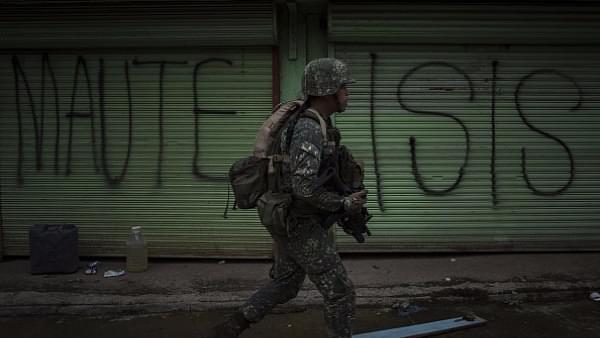 Philippine marine soldiers in a cleared street but are still in range of enemy sniper fire in Marawi, southern Philippines. (Jes Aznar/Getty Images)

Even as the battle at Mosul in northern Iraq raged for the better part of almost a year, most people remained unaware of how Islamic State was planning the creation of its next bastion. The terrorist group had gained legitimacy within the ranks of illegitimate radical Islam through its ability to hold territory and control finances, which it used to fuel large-scale resistance in the supposed name of Islam.

Territory is important for any renegade movement, especially one which has aspirations of creating an Islamic caliphate. Al-Qaeda made the mistake of not acquiring any of its own, and rues to this day its guest status in Afghanistan. Abu Bakr al-Baghdadi was smarter. He decided that territory and finances were two things that would give him authority and legitimacy, the latter being reinforced by proximity to the revered shrines in Saudi Arabia. He knew that holding on to territory in the Middle East would always be a challenge and would draw major international players into the conflict, the United States and Russia primarily. Survival against them would only be a matter of time. In its concept, it needed to have dedicated Islamist fighters in its ranks, some of whom would return to fight in the countries of their origin. The second rung has to be the volunteers, to whom it advises not to travel but await instructions to fight in their homeland.

Islamic State’s search for its next bastion gave it options of regions in Africa, the Middle East itself, the Afghanistan-Pakistan (Af-Pak) region and South East Asia. Surrogacy by riding on the back of existing jihadi groups is the concept Islamic State follows, but after the fall of Mosul and the increasing pressure it is coming under in Syria, the group has possibly considered the idea of remaining in a virtual and networked state even as it pursues its new bastions.

Resistance to Islamic State’s efforts in the Af-Pak region has not given it the territory and finances it seeks through jihadi-controlled areas and the illegitimate narcotics trade. Besides, any upsurge of a strategic nature in the Af-Pak area is bound to once again draw major international players into the conflict. Africa has a dispersed Muslim population and not much money.

The region, therefore, which largely meets the group’s requirements for the concept it pursues is South East Asia, where under-the-radar Islamic insurgencies have been existing for many years.

What is the rationale behind this assumption? South East Asia has a large and concentrated Muslim population, although its location is nowhere near the Arab lands with which Muslims have an emotional connect, to accept the notion of the caliphate. The world’s largest Muslim population exists in Indonesia, its number being upwards of 203 million. Malaysia has 20 million and Philippines 11 million, mainly concentrated in the south in Mindanao in the Bangsamoro or Moro region; four million exist in southern Thailand and approximately two million in Myanmar with over a million of them being the Rohingya of Rakhine. Singapore too has a 15 per cent Muslim populace of its total five million people.

Thus, an estimated 240 million Muslims make up South East Asia. There is no better place to run an insurgency-like movement than the island regions of Indonesia, Malaysia and the Philippines because the terrain offers enough scope for militant hideouts. There are enough unoccupied islands, and the security forces can only destroy strongholds but cannot occupy every recaptured territory.

Poverty and resentment against the governments are rife. In addition, what could draw the devious attention of Islamic State is the huge international trade which takes place through the sea routes interspersing South East Asia. Piracy has been a lucrative means of gaining illegitimate finances and projecting a nuisance potential of illegitimate power.

One of the oldest insurgencies of the region, dating back to 1968, is the Moro uprising in the Mindanao region of southern Philippines. The Philippines armed forces do not have a reputation for professionalism and this has helped the Moros and their numerous militant outfits to survive. The recent uprising in Mindanao in May this year and the subsequent takeover of the 200,000-strong city of Marawi by Islamic groups confirmed the initial indications of serious Islamic State presence in the region.

Apparently for some time now, Islamic State has been transferring large sums of money to the Moro organisations. The Philippines has revealed that there are in Mindanao Islamic State-linked terrorists from Indonesia, Malaysia, Singapore, Pakistan, Saudi Arabia, Yemen, India, Morocco, Turkey, China and Chechnya. However, even before the Marawi uprising, there were enough efforts afoot to bring the radical Islamic State ideology to Mindanao. The initiators are known to have been Omar Khayyam and Abdullah of the “Maute Group”, although they preferred the name Dawla Islamiyah. Both are believed to have been radicalised in the Middle East, with Omar Khayyam at Al-Azhar University in Egypt and Abdullah in Jordan pursuing Islamic studies. Executions similar to that carried out by Islamic State, with victims dressed in orange, have attempted to bring the terror group’s footprint closer to the region.

Even as the Islamist stronghold in Marawi is in its last stages and only 40-50 fighters remain, the five-month-long siege has given Islamic State and the Moro groups the confidence they needed; this worries the governments of the Association of Southeast Asian Nations no end. The onset of the Rohingya issue in Myanmar and the outpouring of 400,000 Muslim Rohingya refugees into Bangladesh are adding to the woes with the potential of another area where the Islamic State imprint could emerge.

What appears to worry the governments in the region and particularly that of Singapore is that Islamic State would be looking for a spectacular act to announce its arrival in South East Asia. The Marawi standoff has not drawn sufficient international attention. A lone-wolf attack or something similar by a small jihadi team in a developed state such as Singapore could have an impact similar to that achieved in Europe. This is also simpler to do in Singapore than in Europe especially because of its dependence on the daily large-scale to-and-fro movement of the Malaysian workforce into Singapore.

South East Asia is not a region India usually focuses on in terms of security. However, considering the manner in which the security situation there is deteriorating, it is time we divided our attention more between the West and the East.