Is The ULFA On A Comeback Trail? 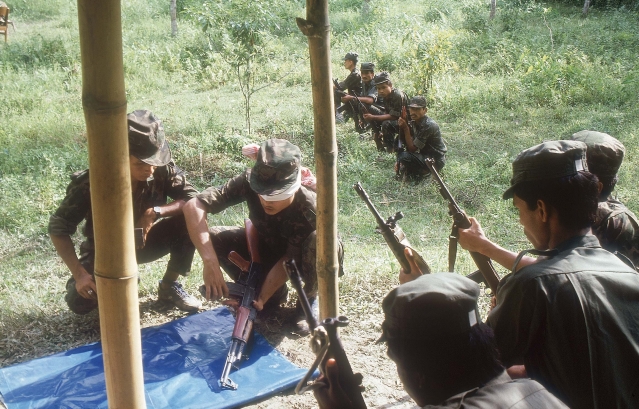 Militants are trained to use arms and ammunition at a training camp in the jungles of Assam. (Saibal Das/The India Today Group/Getty Images)

In present times, the question uppermost in the minds of Assam’s citizenry, and those charged with the state’s security, is if the Paresh Barua-led faction of the United Liberation Front of Asom (ULFA) gaining ground. The answer: it would seem so, if the spate of youngsters joining the ranks of the proscribed outfit and growing grassroots support for the outfit provide are an indication. And the reason: the Citizenship (Amendment) Bill, 2016, that has created deep fissures in the state, besides triggering outrage against the ruling Bharatiya Janata Party (BJP).

The bill, which seeks to provide citizenship to Hindus (besides Sikhs, Jains, Buddhists, Christians and Parsis) fleeing persecution from Bangladesh, Pakistan and Afghanistan has re-ignited fears among the Assamese of being reduced to a minority in their own state. The bill proposes to grant Indian citizenship to people from these communities who have entered the country illegally or have stayed beyond the expiry of their visas and have lived in this country for a period of six years. Once the bill is passed by Parliament, Hindus, who have entered Assam illegally from Bangladesh till 2012 (that is, if the bill is passed this year) will be granted Indian citizenship. That would mean a few lakh Bengali Hindus becoming citizens of India and eligible voters in Assam, and the Assamese fear that would reduce them to a minority.

This genuine fear of the Assamese, which triggered the six-year-long anti-foreigners Assam movement from 1979, and gave birth to the ULFA, has resurfaced again, thanks to the bill. Assam has been witnessing mass protests against the bill for the past one and a half years and tens of thousands have taken out processions, held rallies and carried out signature campaigns against the bill. The expectation was that the BJP-led Union government would take into account the sentiments of the people of Assam and announce that the state, and the entire Northeast, would be kept out of the purview of the bill.

Unfortunately, that did not happen and not only has the BJP lost a lot of ground in Assam and the sympathy and support of the Assamese, it is now perceived as a party that has gone back on its electoral promise of detecting and deporting foreigners (illegal migrants from Bangladesh) from Assam. It is important to note here that while the BJP makes a distinction between Hindu and Muslim migrants from Bangladesh, the Assamese do not do so. It would, thus, have been best to announce that the provisions of the bill would not applicable to Assam.

The Assamese, says Dipanka Kumar Nath, the president of the powerful All Assam Students' Union (AASU) that had led the Assam agitation (1979 to 1985) and is again at the forefront of the protests against the bill, feels alienated and with his back to the wall. “For the Assamese, it is now a matter of saving his identity, language and culture from being totally inundated by the lakhs of Bangladeshis, who will gain citizenship if this bill is passed. The bill poses a grave existential threat to the Assamese. The Centre’s determination to push the bill despite the mass protests in Assam has reduced the Assamese people to a state of utter helplessness,” said Nath. It is this desperation that is resulting in more and more Assamese people turning towards the ULFA.

Assam Police’s Special Director General, who heads the Special Branch (SB), Pallab Bhattacharyya, warned last month that the bill is giving a fresh lease of life to the ULFA and created a rift between the Assamese and Bengali citizens of the state. Other police officers, who have been monitoring the activities of the ULFA fully endorse Bhattacharyya’s statement. “There is growing support for the ULFA now. Since the Union government has been totally unresponsive to the grave concerns of the Assamese, who feels frustrated with democratic and peaceful movements (against the bill) having failed to make any impact, he is now thinking that perhaps only the ULFA can save the Assamese from obliteration and becoming a minority in Assam,” said a senior officer, who did not want to be named.

The ULFA has also been carrying out a silent campaign that has tapped into popular frustration and anger among the Assamese against the bill. This campaign has been a very effective one, as is evident from a number of young professionals giving up their promising careers to join the insurgent outfit in recent times. The latest such person to join the ranks of the ULFA is Abhijeet Gogoi, a software engineer, who passed out from a private university in Chennai and worked in Singapore and Australia.

Last month, Munna Barua (Paresh Barua’s nephew), an electrical engineer, who was working with the public-sector Indian Oil Corporation joined the outfit along with another software engineer, who had worked in the US. Gogoi, like Barua, posted a video explaining why he joined the ULFA. These videos, like the ones posted by entrants to the ranks of Kashmiri militants, have gone viral in Assam and the police fear that this is helping the ULFA find new recruits in the state.

Assam Police officers say that there has been a discernible increase in support for the ULFA from the masses. ULFA flags have been appearing in many parts of the (Assamese-dominated) Brahmaputra Valley and intelligence reports warn that the outfit is regrouping. The reports also warn that over the next few months, the ULFA could carry out strikes in some parts of the state with the intention of showing off its potency and, thus, attracting more recruits.

“The fear of being overwhelmed by an alien (Bengali) culture and of being reduced to a minority in Assam is very real and runs very deep among most Assamese today. Since mainstream political parties and organisations have failed to address this fear and reassure the Assamese that their fears will never come true, more and more Assamese feel it is only the ULFA which can prevent Assam from becoming a Bengali-majority state,” said a police officer.

“The BJP, and the Union government, are to blame for the resurgence of the ULFA. Had they paid heed to the sentiments of the Assamese and inserted some special provisions in the bill safeguarding Assam’s interests, this alarming situation would not have developed at all. We told them (BJP leaders) many times that the situation was turning grave and the Assamese people were getting restive, but they ignored our repeated warnings. We appealed to them to announce that Assam would be kept out of the purview of the bill, but they did not listen to us. It appears they were more bothered about pleasing the (Bengali) people of Barak Valley,” said a senior leader of the Asom Gana Parishad (AGP), a partner of the BJP in the ruling coalition in the state. The AGP was also born out of the Assam movement.

“What is terribly distressing is that the bill would negate the Assam Accord (signed after the Assam movement) and the entire National Register of Citizens updation exercise. A total of 855 men and women were martyred in the Assam movement and the bill is seen as a terribly insult to their memories and sacrifices,” said the AGP leader. That is because the Assam Accord put 24 March 1971 as the cut-off date for detection of foreigners (illegal Bangladeshi immigrants) in Assam.

Anyone who has entered the state after this cut-off date is to be detected and deported. But the bill would legalise the status of those who entered Assam illegally even as recently as six years ago! “To think that the entire Assam agitation, in which tens of thousands made enormous sacrifices, would go in vain is a terrible nightmare for the Assamese and it is to pre-empt such a nightmare that many are inclined to support the ULFA. This is a situation that is entirely the making of the BJP,” said another AGP leader, who took an active part in the Assam movement and is also a minister now.

What is more unfortunate is even after disturbing reports of the ULFA gaining ground and attracting more and more recruits have come out, the BJP leadership in the state and Centre have preferred to ignore the reports or pretend otherwise. And this ostrich-like attitude, and display of utter insensitivity towards the grave fears and concerns of the Assamese, will surely lead to fresh turmoil in Assam. The dark days of the 1990s and the first decade of the present century, when abductions, assassinations and bomb blasts were the order of the day in the state, could get repeated once again.