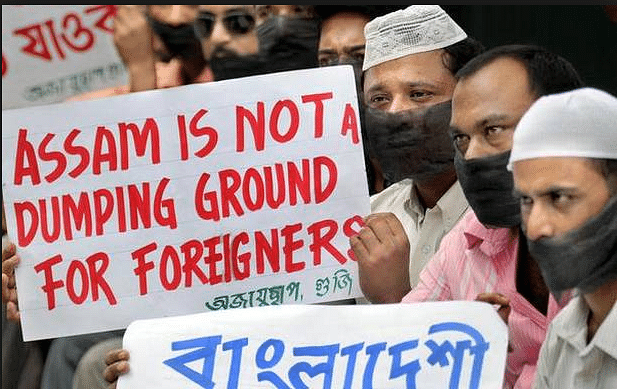 The ruling Bharatiya Janata Party (BJP) in Assam has been pushed into a very uncomfortable corner over the proposed Citizenship (Amendment) Bill, 2016 that seeks to grant citizenship to religious minorities from Pakistan, Afghanistan and Bangladesh. Protests against the bill, which is now being examined by the Joint Parliamentary Committee (JPC), have peaked in Assam (except the Barak Valley that is populated by Bengali-speaking Hindus and Muslims).

Since the bill – it seeks to lower the waiting period for grant of Indian citizenship to Hindus, Buddhists, Jains, Sikhs, Parsis and Christians from Afghanistan, Pakistan and Bangladesh from the existing 12 years to seven years – has been framed and introduced by the BJP-led National Democratic Alliance (NDA) government at the Centre, the party unit in Assam finds itself unable to join the widespread protests that have rocked the Brahmaputra Valley which is predominantly Assamese. Various organisations, including the opposition parties and the students’ bodies, have pushed the BJP on the backfoot and blamed it for disrespecting the sentiments of the people of Assam by not opposing the bill.

Such is the intensity of opposition to the bill that Chief Minister Sarbananda Sonowal, who had been conferred the title of ‘jatiya nayak’ (national hero) after he successfully petitioned the Supreme Court against the highly discriminatory Illegal Migration (Determination by Tribunals) Act, or IMDT Act as it was popularly known, is now being challenged. The IMDT Act of 1983 had shifted the burden of proving citizenship from an accused (of being a foreigner) as under the Citizenship Act, 1955 to the complainant (the state or an individual) and was struck down by the Supreme Court in 2005. Sonowal was even challenged by a BJP legislator and asked to justify his ‘jatiya nayak’ honorific. Other organisations have accused him of betraying the Assamese and Assam’s interests. An anguished Sonowal was forced to declare that he would quit his post if he failed to protect the interests of his state.

The opposition to the Citizenship Act from the indigenous Assamese and tribal groups of the state stem from their genuine fear of being reduced to a minority in their own state. Assam has had to suffer the burden of millions of migrants, mostly Muslims but Hindus as well, from Bangladesh since the turn of the last century. The British first started bringing in landless Muslim peasants from Bangladesh to cultivate the vast tracts of fertile but uncultivated lands in Assam. Later, immediately before and after Independence, Muslim politicians of Assam encouraged further influx of tens of thousands of Muslims from East Bengal (and then East Pakistan, which is now Bangladesh) and changed the demographic profile of Assam (read this article). Hindus from East Bengal (and then East Pakistan and Bangladesh) migrated in considerable numbers immediately after Partition and then following successive attacks on them, the last large wave being in 1971. But it is a fact that the Assamese identity stands threatened today and if the Citizenship Bill is enacted, this threat will get magnified.

The JPC, which is examining the bill, has met many people and organisations in Guwahati and Silchar who have (respectively) opposed and supported the bill. That now threatens to create a divide between the Brahmaputra and Barak valleys. The JPC will conduct more hearings, and the bill has also been opposed by Meghalaya and other states in the region are also expected to come out against the proposed bill. Given this, and that passions are running high against this bill in Assam, it would be best to exempt Assam and others states of the North East from the purview of the bill.

But the bill should not be scrapped as is being demanded by many in Assam. Rather, some provisions of the bill ought to be amended (as has been suggested in this article). The bill will provide succor to lakhs of Hindus, Sikhs, Buddhists, Jains, Parsis and Christians, who have faced indescribable and terrible persecution in Pakistan, Afghanistan and Bangladesh at the hands of radical Islamists and even the state. They have no place to take refuge in except India, which simply cannot abandon them to their fate. Social, political and economic discrimination against religious and ethnic minorities, physical atrocities on them (especially their womenfolk), forcible conversions to Islam and even killings by Islamists are pretty common in Pakistan and Afghanistan and continue to occur in Bangladesh. They have to be provided refuge by India. And these persecuted minorities should not be compared to Myanmar’s Rohingyas because the latter have many other countries, especially the Islamic nations, to turn to. The persecuted Hindus, Buddhists, Sikhs, Jains, Parsis and Christians don’t have that privilege. The argument that the proposed bill discriminates against Muslims (the Rohingyas) is a puerile one.

The opposition to the Citizenship Bill in Assam also begets another question: what has been done by successive governments in Assam to tackle the threat posed by the millions of people of Bangladeshi origin residing illegally in the state to the socio-cultural, demographic, economic and political fabric of the state? The most strident opposition to the Citizenship Act and the most vociferous criticism of Chief Minister Sonowal is emanating from the ranks of the Congress, which has ruled the state for most of the decades since Independence and which has encouraged this illegal influx of Muslims from Bangladesh and made them into vote banks for its political gains. The Asom Gana Parishad (an ally of the BJP in the state now) had been in power in Assam, but could also not do anything.

The proscribed United Liberation Front of Asom (ULFA) has opposed the bill, and its military chief Paresh Barua (who is reported to be in hiding in China) has issued statements against the bill. ULFA chairman Arabinda Rajkhowa (who has come overground) has threatened to withdraw from the ongoing peace talks if the Citizenship Bill is passed. But the ULFA has no moral right to even comment on the bill; the entire top leadership of the ULFA was sheltered in Bangladesh and received patronage from the earlier Khaleda Zia regime. ULFA cadres were sheltered in camps in Bangladesh and received a lot of assistance from the Islamist regime in power in Bangladesh then. The ULFA leadership did not utter a word against unabated influx from Bangladesh all those years since they could not risk incurring the wrath of their masters in Dhaka who wanted (and may still want) to change the demography of Assam. Instead, the ULFA gunned down innocent Nepalis and Biharis in Assam at that time in an attempt at ethnic cleansing. Even now, Barua and his comrades are under the control of foreign powers and have to do their bidding.

It is time the people of Assam question their leaders, including the ULFA, which falsely claims to protect Assam’s and Assamese interests. It is high time the people of Assam demand answers from their leaders on what they did on this burning (foreigners’) issue when they were in power. And it is also high time for the people of Assam to expose the hypocrisy of their leaders and punish them for encouraging influx from Bangladesh for their political gains. The proposed Citizenship Bill is not responsible for the threat posed to Assam and the Assamese by the presence of a huge number of foreigners in the state. Assam’s successive leaders and organisations like the ULFA, which whip up sentiments while falsely claiming to ‘fight’ for Assam are. And it is high time they are held accountable for all that they did, or did not do.