It Is High Time India Graduates To Theatre Commands 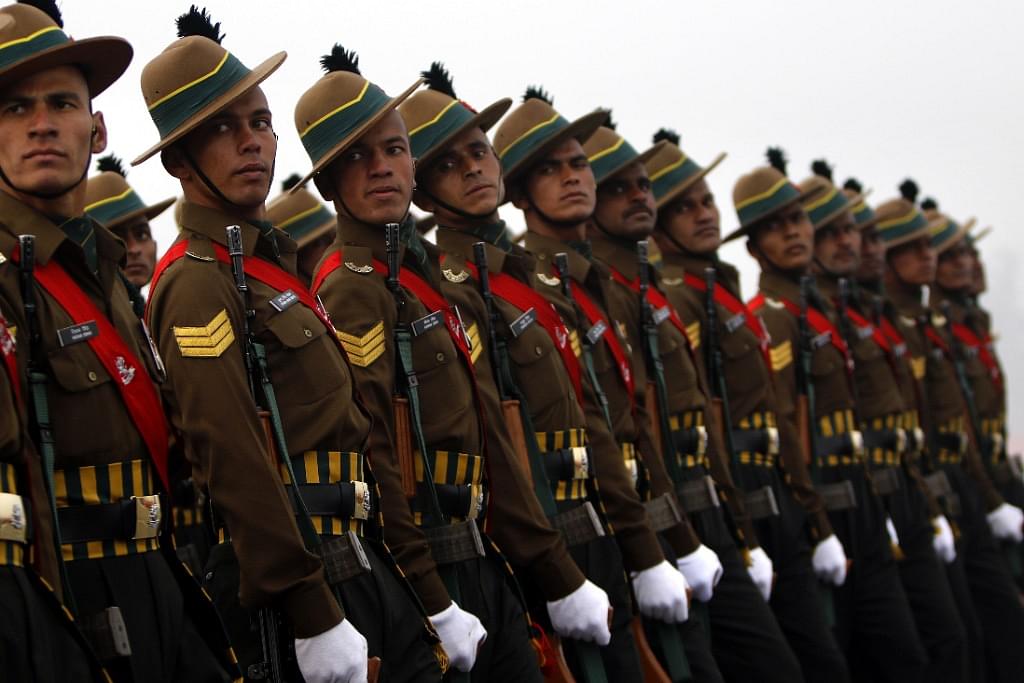 A Contingent of Kumaon Regiment of Indian Army. (Arun Sharma/Hindustan Times via GettyImages)

Imagine an outbreak of hostilities between India and China on the eastern front, something like what happened in 1962. Or a Doklam spinning out of control. The primary responsibility for stymying Chinese advance would rest with the Eastern Command of the Indian Army headquartered in Kolkata. If Indian Air Force (IAF) assets need to be mobilised, the Eastern Air Command headquartered in Shillong, about 1,200 kilometres by road away from Kolkata, has to be brought into the picture. And if the theatre enlarges and Navy also has to join in, the Eastern Naval Command at Visakhapatnam (nearly 900 km away from Kolkata in another direction) has to get involved as well, along with the Andaman and Nicobar Command.

And if the conflict escalates and spreads to the northern front - along Uttarakhand, Himachal Pradesh and Jammu and Kashmir - the Lucknow-based Central Command, Udhampur-based Northern Command and elements of the Jaipur-based South Western Command of the army would get involved, along with the IAF Central Command based in Allahabad and Western Command based in Delhi. And let us not forget the Strategic Forces Command that will also come into the picture.

Thus, four army commanders, three air marshals, two navy vice admirals and another officer (from any of the three services) heading the strategic command - all three star generals - would be directly responsible for the defence of the eastern and northern fronts and bring on the war table the attendant nightmares of a lack of coordination, synchronisation of the entire war machine and lacunae in holistic and coordinated planning along the entire border. They would pose a collective drag on speedy operations at a time when speed would be of utmost importance. So many individual service commands is a sure shot recipe for operational chaos.

The Chinese, of course, would suffer from no such problem since their entire war machinery would be handled only by one three-star general who heads the Western Theatre Command of China's People's Liberation Army (PLA). That officer would be the one-point authority and control over all land and air assets on China's western theatre with India. He would be responsible for conducting the war and take all decisions without domain encumbrances. The PLA would, thus, be at a much more advantageous position than the Indian armed forces.

In addition, no two operational commands of the different services are collinear as far as their areas of responsibility (AORs) are concerned and no two headquarters are co-located. As Rear Admiral Monty Khanna, the chief instructor at Defence Services Staff College, Wellington, writes in this paper he presented at the Centre For Joint Warfare Studies (Cenjow), getting all of them (the operational commands) to function coherently is difficult to say the least... add to this the fog and friction of combat and you are looking at an organisational nightmare.

The concept of necking down India's many operational commands into four to five theatre commands under one theatre commander has been discussed since 1999. Many committees have strongly recommended it. The Subrahmanyam Committee set up after the Kargil War also recommended restructuring of the armed forces, which is long overdue. Major General (retired) Arun Govil, who commanded a mountain division, says: Modern warfare is all about speed, concerted action and mobility and optimally sequenced and synchronised use of force by deploying all assets in a planned manner is critical and can only be achieved by unity of command. Rear Admiral Khanna, in his paper, rightly says: The requirement for single point control and responsibility of forces engaged in combat is inescapable, and there is no better person to perform this task than a theatre commander charged with the responsibility of fighting and winning a war against an adversary.

A former corps commander who served in the east and did not want to be named said: resources are always limited and every battlefield commander clamours for more. For instance, there may be a need for air cover for ground troops in one sector and that request has to be now routed through the army hierarchy to ultimately reach the army commander who passes it onto the army chief, who then takes it up with the air chief. The air chief, sitting maybe hundreds of kilometres away, then considers the request and either sanctions it or turns it down. Even if he sanctions it, valuable time is lost by then, and in modern warfare, every minute counts.

An Air Vice Marshal, who served in the IAF Eastern Command headquarters, and is one of the few supporters of the theatre command concept among top IAF officers, said: Having officers of equivalent ranks from different services commanding their own forces and responsible for battle in one geographical area is an outdated concept. For instance, in eastern (including northeastern) India, in the event of a conflict with our neighbour (China), the army's eastern command commander-in-chief (C-in-C) and the IAF’s eastern command C-in-C have to work as one. That will not happen and all serious decision making, especially about deployment of air assets, will have to be referred to the army and air headquarters in Delhi. In the heat of the battle, differences between the two services will inevitably crop up and that can very seriously affect our effectiveness. Hence, a theatre command with one commander is the need of the hour.

A serving major general in the army's 33 Corps headquartered at Sukhna in north Bengal said that while war games in conjunction with the other services are carried out to simulate battlefield situations to fine tune doctrines for seamless and smooth coordination between the services, in actual battles, turf wars, egos and differences of perceptions as well as the narrow need to preserve the interests of their respective services crop up among even among the senior most officers. A theatre commander with supreme authority in one theatre is the answer. We have to migrate to the one front, one commander format, he said.

A Navy commodore (equivalent to rank of brigadier) who was involved in an inter-services post-mortem of the Kargil war said: The army's battlefield commanders had been asking for air support to take out Pakistani artillery and positions. But it took a few days for it to happen. Perhaps, had helicopter gunships and other air assets been deployed earlier, many casualties could have been averted. Of course, this is not to say that other aspects like the fallout of involving the IAF in a limited conflict should not have been deliberated on, but in a real conflict, decisions need to be taken very fast and that can happen only when you have one commander in one theatre.

Major General K K Mehta, who commanded a mountain division in the northern sector, said that the move towards integrating the different services commands into unified theatre commands has to be carried out in a phased manner. In the first phase, he said, the AORs of the different commands of the three services should be redrawn to make them collinear and correspond to each other. In the second phase, the headquarters of the regional commands of the three services should be co-located. For instance, he pointed out, the eastern army, navy and air force command headquarters should ideally be Kolkata.

Similarly, the western air command headquarters has to be moved out of Delhi - co-locating the air HQs and the western air command HQs at one location is a no brainer, he says - to be co-located with the army's western command HQs at Chandimandir. Or, maybe, both should be moved to Mumbai, which is the navy's western command headquarters. The army's southern command HQ at Pune should be moved further south to co-locate it ideally with the navy's southern command HQ at Cochin and the same ought to be done to the IAF southern command HQ, which is now at Thiruvananthapuram. Maj Gen Mehta said that such co-location has to be rational: in the south, the navy will have a major role to play since peninsular India is surrounded by the Bay of Bengal and Arabian Sea on two sides and the Indian Ocean in its south.

The third and final phase would be the integration of the services into unified theatre commands. All this, said Maj Gen Mehta, has to be done within strict timelines in order to ensure that the process is not delayed or derailed. All the officers agreed that the political establishment has to take a final call on this and make all the services fall in line. And while welcoming the statement of Defence Minister Nirmala Sitharaman earlier this month that the government wants the armed forces to move towards theatre commands and that the issue of jointness is dear to PM Modi, they also pointed out that the process ought to have been initiated at least four years ago.

But, along with moving towards theatre commands, there are many other things that need to be done. There has to be, says former army chief General Shankar Roy Chowdhury, greater integration between the Ministry of Defence (MoD) and the services headquarters. India, he points out, is the only major democracy where the service headquarters (the headquarters of the army, navy and air force) are away from the MoD, which has no presence of uniformed officers and is manned exclusively by civilians who have little or no knowledge of defence matters.

A former vice chief of army staff who did not want to be named said that the three service chiefs are operational commanders instead of being chiefs of staff to the Defence Minister and the Prime Minister. The services headquarters have developed a command rather than staff culture, he said, and that has affected long-term future-oriented planning - setting up theatre commands, strengthening the Integrated Defence Staff headquarters, and creating the long-awaited post of chief of defence staff (CDS).

Also, as Air Marshal (retired) Narayan Menon writes, India has to urgently move towards self-sufficiency in defence hardware. India's armed forces are short of personnel, equipment and firepower. He says: The Army needs artillery guns and reliable rifles for its infantry. The Navy requires more submarines as replacements for its ageing fleet. The IAF is woefully short of fighter aircraft. We should have at least 45 frontline squadrons, but the current strength is around 30 squadrons. War waging reserves (WWR) are running low and we need more aircrew. India imports 75 per cent of its war weaponry and energy needs, inflow of which will become uncertain if sanctions or embargoes are imposed in the event of hostilities. Menon argues that till India attains self-sufficiency in manufacturing weapons, it should move cautiously towards theatre commands. But, he adds, theatre commands are inevitable.

Indeed, they are. The question is how fast the political leadership moves to push the three services to sink their differences. More importantly, the question also is that how fast the executive can push the recalcitrant part of the bureaucracy in the MoD to abandon its tendency to obfuscate and delay over matters of men in uniform, to set up the theatre commands.