Lessons From Kargil: How Far Have They Been Implemented Twenty Years Later? 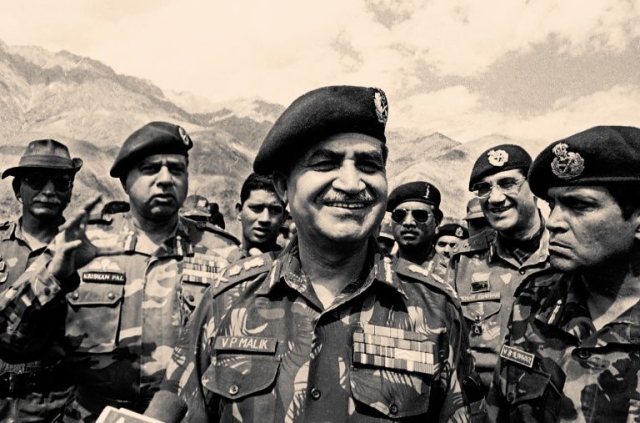 Today (26 July 2019) is the 20th anniversary of the Kargil conflict. The nation is paying homage to the 527 soldiers martyred and over 1,100 soldiers wounded at the Kargil heights in the nearly three-month long conflict with Pakistan during May – July 1999.

Recognising the deeds of our brave-heart soldiers is essential and what better way is there than for the nation to revisit war memorials, run dedicated programmes and attend or view wreath-laying ceremonies.

However, what is equally important for us Indian citizens is the necessity to be clear about what happened at Kargil that year, how things went so wrong at the outset and how the situation was subsequently retrieved. From every negative security situation emerge lessons that a nation must quickly grasp and take the required steps to ameliorate those, so that there is never a repetition.

Even more than just learning lessons, constant endeavour must be made to appreciate what our adversaries may do next to make us insecure.

In this essay only a brief recall will be made of the events at the Kargil heights in 1999, enough only to familiarise the readers. Thereafter, I shall attempt to analyse the lessons that have emerged as the stakeholders put their heads together and how far we have reached in implementing them, twenty years after the war.

The scope of this piece is not limited to the Kargil front or any other areas in the operational tactical domain; rather, this article takes a holistic look at the military security domain.

The then ambitious Pakistan army chief, General Pervez Musharraf, conceived a plan away from the eyes of Pakistan’s political leadership and the other two services. The plan aimed at targeting the supposedly unimportant Kargil sector to interdict the Srinagar-Zojila-Kargil road so that the maintenance of Ladakh and, by implication, of the Indian Army deployment at Siachen glacier would become near impossible.

With that, Musharraf expected India to sue for peace and be constrained to withdraw from Siachen. Conceptually, the intent was sound but Musharraf failed to account for the variety of options India had for responding and the ferocity with which these were implemented, which also included going for an all-out war.

Musharraf counted on surprise as the prime factor of his plan and chose to attempt interdiction from the heights above Kargil, some of which were vacated every winter by both sides.

In the winter of 1998-99, he decided to prematurely occupy the heights on the Pakistan-occupied-Kashmir (PoK) side of the Line of Control (LoC) as well as some on our side, on a frontage of 130 kilometers.

The Indian Army’s discovery of this intrusion was accidental, its initial response muted due to insufficient realisation of the magnitude of intrusion and its implications. However, whatever were the blunders they made then were overcome with a robust redeployment and professional response aimed at restoration of the sanctity of the LoC. It took almost ten weeks of doing that — at much human and material cost.

The remembrance and dedication to the sacrifice of India's martyrs in Kargil will be in the right spirit if we can all affirmatively say it won't happen again. No adversary, especially a defeated one, ever employs the same strategy as they had in the past. What India has to be prepared for is the revenge of a wily adversary who has not forgotten many defeats and continues to seek retribution. It means so preparing oneself that all threats are catered for and all lessons of the past are analysed and implemented.

The Kargil Review Committee (KRC), under the leadership of K Subramaniam, the doyen of Indian strategic analysts, comprehensively examined the various aspects of the Kargil crisis and, in record time, came out with a set of proposals for strengthening India’s national security capability.

To the credit of the Vajpayee government, there was no attempt to restrict the stock taking to operational and tactical levels, where the effect of the failures of Kargil were most felt. It went ahead with a comprehensive review.

The KRC had its terms of reference outlined quite clearly — "to review the events leading up to the Pakistani aggression in the Kargil district of Ladakh in Jammu and Kashmir; and to recommend such measures as are considered necessary to safeguard national security against such armed intrusions".

While the KRC focused much on intelligence collection, operational procedures and systematic sharing of data, its emphasis, correctly, was on national security structures.

Again, appropriately, the NDA government then set up a Group of Ministers (GoM) to examine the proposals. Task forces were set up by the GoM under senior, veteran and experienced officials to examine core issues, as under:

There can be no doubt that the individual reports and the subsequent part-implementation was the most transformational chapter in the history of Indian national security management. The scope of the current piece does not permit description of all the measures and the omissions; a few important ones are explained here.

The appointment of a permanent National Security Advisor (NSA), his secretariat and adjunct organisations did bring national security into focus beyond just the apex-level Cabinet Committee on Security (CCS) — which was too high a body with little between it and the implementers.

The Defence Intelligence Agency (DIA) and National Technical Research Organisation (NTRO) were among the first bodies that were set up. The first steps towards an integrated Ministry of Defence were undertaken with the setting up of the Headquarters (HQ) Integrated Defence Staff (IDS) — but the spirit of the recommendations that included induction of uniformed officers into the MoD has remained ignored till today.

The recommendation to have a Chief of the Defence Staff (CDS) met the approval of the CCS but again has languished without being implemented. In terms of coherence between the three armed services, there has been progress but the effort has lacked vigour and awaits a legislative push.

Two Joint Commands were created in the form of Andaman and Nicobar Command and the Strategic Forces Command (SFC) and their functioning has been optimised to a great extent. Yet, without a proper CDS and creation of theatres of operations with joint-operational functions, the full optimisation has yet to be achieved.

Among measures to overcome India’s weak strategic culture and ways of overcoming it, the KRC and GoM had recommended the setting up of a National Defence University (NDU). This requires an Act of Parliament which is yet to be initiated although an NDU cell has functioned in the HQ IDS for the last 15 years.

In the domain of border management and internal security, the recommendation of the KRC to have a single force look after one border has been achieved to a great extent. The BSF was sent back to a border-guarding role and was replaced by the CRPF in counter-terrorists operations. The CRPF has gamely fought the insurgency in the Red Corridor and achieved fair success albeit without too much reorganisation and re-equipping.

The government set up the Naresh Chandra Task Force in 2011 to further examine the unimplemented parts of the KRC report. It was a good step and many of its recommendations have been approved. Some have been implemented, such as the creation of bodies to cater to Special Forces (SF), cyber security and space.

What is really lacking, even after this committee report, is the absence of a National Security Strategy (NSS) document to guide all stakeholders of national security with constant updating and revision. In its absence, the three services and the HQ IDS have been active in formulating joint and single service doctrines.

While a fast track procurement of essential items of hardware was implemented immediately after Kargil — leading to acquisition of surveillance equipment including UAVs (Unmanned Aerial Vehicles) and thermal imagers — acquisition thereafter has been unable to keep pace. The Modi government in the first term made brave efforts towards refinement of the defence procurement procedure but it will require some more push to achieve the optimum pace; budget remains a handicap too.

Where the KRC and GoM recommendations were really received with all due seriousness was in the limited delegation of powers to the three services HQ although this exercise came to a halt after the first transformational push in 2001. The Ajai Vikram Singh Committee (AVSC) undertook the task of reviewing the personnel management and succeeded in reducing the age profile of the Commanding Officers (COs) and the Brigade Commanders.

Progressive improvement should have travelled up the chain but today we still have a major problem of too little time spent by senior officers in higher ranks.

Organisationally, the setting up of HQ South Western Command, HQ 14 Corps and HQ 9 Corps has optimised the quantum of forces under the operational commands. The current reorganisation is a progression of optimisation.

From 2003, the Indian Army undertook a large scale exercise towards holistic transformation instead of just incremental optimisation. But almost seven to eight years of deep study, analysis and recommendations somehow did not receive the due focus, and it was lost in bureaucratic apathy. Much of this transformation was aimed at the operational and tactical level and if even partially implemented it may have helped in overcoming many of today’s problems.

The period of this review coincided with the high mark of the Indian economy and the Army may not have faced budgeting issues of the magnitude being faced today.

Notwithstanding all of the above, there has been a definite improvement in intelligence and the overall security of the nation. Foolproof security must always remain the aim cutting across the spectrum of threats from the nuclear to conventional and sub conventional. Weaknesses remain in the domain of equipment management and procurement, ammunition management and issues involving personnel.

In terms of structures and higher security management, the appointment of the CDS languishes more because of the inability of the three services to come to a consensus.

At the operational and tactical level the exercise of optimisation must continue. The marked achievements in sub-conventional operations must not lull us in any way. In fact, balancing the sub-conventional commitment with focus on the conventional threats must always remain a priority — in training and operations.

It is unlikely that there will be a Kargil 2.0; somehow the Indian Army has remained fairly obsessed with the possibility of such an endeavour by Pakistan. We do face a wily foe and innovation has been their hallmark. Yet, we are far better off today than we were 20 years ago and must continue to work towards “not having to fight with just what we have”.

This must remain the guiding mantra, not only of the Armed Forces but also of the political class and equally that of the bureaucracy.