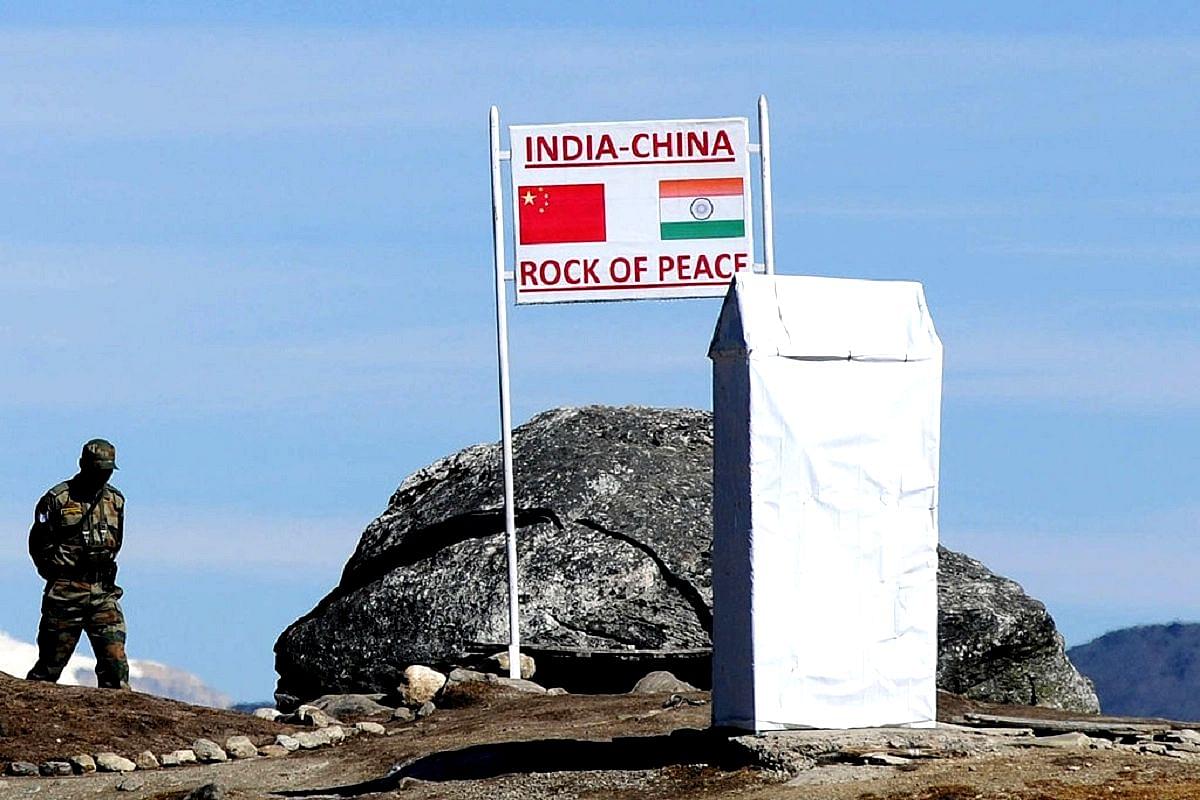 An Indian Army soldier keeps a vigil at the India-China border in Arunachal Pradesh. (BIJU BORO/AFP/GettyImages)

For the first time in more than six decades, the Indian Army is now completely focused on meeting the Chinese threat across the Line of Actual Control (LAC) in Arunachal Pradesh and Sikkim.

Till very recently, most units under the Army’s Eastern Command had a dual role--counter-insurgency and counter-terror (CI/CT) operations as well as guarding the LAC.

But now, save for just one brigade and a couple of smaller units, the entire eastern Army has been reoriented to meet the threat from across the international border.

The Army, a senior officer of the Kolkata-headquartered Eastern Command told Swarajya, has ultimately returned to its core responsibility: guarding against and meeting external threats.

This has been made possible by a series of major steps undertaken by the Modi government over the last seven years. The primary among them has been to root out insurgency from the region and stitch peace deals with the militant groups to usher in lasting peace in the region.

The other steps included strengthening the police forces of the northeastern states as well as the central armed police forces (CAPFs), handing over primary responsibility for CI/CT operations in the region to the Assam Rifles and reorienting the Army to meet the challenge across the LAC.

Till recently, the Dimapur-headquartered 3 Corps shouldered the major burden of CI/CT operations in the region. The 3 Corps also had two entire divisions of the Assam Rifles under its command for carrying out these operations.

But the 3 Corps was also tasked with guarding the LAC in eastern Arunachal, and that placed a huge burden on the formation.

“This dual tasking obviously affects combat readiness and in the event of an outbreak of hostilities along the LAC, swift deployment of units engaged in CI/CT operations in the hinterland would have been impossible.

Hence, it was felt that the Army should be returned to its primary responsibility of guarding the LAC and meeting threats from across it,” said a top staff officer of Eastern Command.

Apart from the 3 Corps, some units and reserves of the Sukhna (North Bengal) headquartered 33 Corps and Tezpur (Assam) headquartered 4 Corps were also deployed for CI/CT operations.

After the reorientation of the Army units in eastern India to focus on the LAC and deployment of many units to the forward and rear areas, only one Brigade--the 73 Mountain Brigade based at Laipuli in Upper Assam--and a few smaller units are tasked with carrying out counter-insurgency operations in the region.

“The area of CI/CT operations has now shrunk to only a small part of Upper Assam, southeastern Arunachal Pradesh and northern Nagaland,” a Major General who commands a division under 3 Corps told Swarajya.

Two more special units--the 12 and 21 Para Special Forces--stationed in the region also have the dual task of carrying out specialised operations to meet both external and internal threats.

The need to wean off the Army from CI/CT operations was felt very acutely during the standoff at Doklam between Indian and Chinese troops in mid-2017.

“Had the situation escalated, we would have been hard-pressed to swiftly move a large number of troops and equipment to the forward areas,” said the Eastern Command staff officer.

It was then decided at the highest to take the additional burden of CI/CT operations off the Army’s back and reorient it to fulfil its primary mandate to meet external threats.

But that was easier said than done. A senior official in the Ministry of Defence (MoD) told Swarajya that in a series of top-level meetings held immediately after the Doklam standoff, a multi-pronged strategy to achieve this was finalised.

Prime Minister Modi chaired most of these meetings. The primary aspects of this strategy were:

Strike peace deals with rebel groups of the Northeast: Union Home Minister Amit Shah played a key role in the success of this.

He got the governments of the insurgency-affected states on board and deployed intermediaries to reach out to the rebel groups and bring them to the negotiating table.

The first step was to negotiate ceasefire deals with the groups and then sign peace treaties with them. Attractive rehabilitation packages were framed and rolled out.

The insurgency has thus been rooted out from most parts of the region save a few pockets contiguous to each other in the three states of Assam, Arunachal Pradesh and Nagaland. This has resulted in a very sharp decline in insurgency-related incidents and casualties.

According to this annual report (2020-21) of the Union Ministry of Home Affairs (MHA), insurgency-related incidents reduced by 80 per cent in the last eight years, while casualties suffered by security forces and civilians went down by 75 per cent and 99 per cent respectively during the same period.

Strengthening police forces and CAPF: Budgetary allocation for modernisation of the police forces of the Northeastern states, providing them better equipment and facilities, upgrading their weapons and infrastructure, and providing better training to deal with militants formed another key part of the strategy.

“Today, these special police units in the states are well-geared and oriented to tackle insurgents and terrorists on their own,” said an MHA official.

The same approach was adopted towards CAPF units deployed in the region for law and order duties. The CAPFs, primarily the Central Reserve Police Force (CRPF), were reoriented towards CI/CT operations rather than merely tackling rioters, arsonists and unlawful elements.

“CRPF units were provided specialised training to tackle and neutralise insurgents and terrorists, and they were equipped with sophisticated arms and special gear. These units have been deployed in many parts of the region now,” said the MHA officer.

Handing over primary responsibility for CI/CT Ops to Assam Rifles: The Assam Rifles--the force came into being in 1835 as ‘Cachar Levy’, a militia to protect British tea gardens from raids by tribals--has been engaged in CI/CT operations in the region, but under the command of the Army.

The Assam Rifles--a huge force of 46 battalions with more than 65,000 men--is now tasked to carry out CI/CT operations independently. That involved a fair bit of reorientation of the force that is commanded by officers on deputation from the Army.

The Assam Rifles has been reoriented to carry out operations on its own and not as an auxiliary of the Army.

Reorienting the Army to guard the LAC and deal with Chinese: A number of army units, before being inducted into the Northeast, used to undergo training in CI operations, mostly at the Counter-Insurgency and Jungle Warfare School (CIJWS) at Vairengte in Mizoram.

But that is no longer the case, and all army units are now oriented toward guarding the LAC and meeting the threat from across the border.

“We are no longer distracted by CI/CT operations and are now reoriented completely towards our primary mandate of meeting external threats. So all units being inducted to the region are also being trained accordingly,” said the Eastern Command officer.

The Army’s withdrawal from CI/CT operations has also enabled it to concentrate on training and maintaining a high level of combat readiness.

“CI/CT duties were a huge distraction and placed a big burden on the Army. It eroded the Army’s combat readiness, affected its ability to quickly deploy to the forward areas in case of emergency and took a big toll on our soldiers,” said a senior officer of the rank of Lieutenant General who had commanded a Corps in the Northeast.

Building and improving border infrastructure: Over the past eight years, top priority has been accorded to building roads and bridges to the forward areas and along the LAC and also upgrading military infrastructure in those areas.

All these infrastructure upgrades and construction are being implemented under strict timelines. Special attention is being paid to surveillance and monitoring stations along the LAC and installation of the latest electronic snooping equipment.

Unmanned aerial vehicles (UAVs) have been deployed, helipads are being constructed, and many measures are being taken to equip the Army to meet the Chinese threat.

At the same time, 990 villages along the LAC in Arunachal Pradesh are being developed under the ‘vibrant village programme’. The villages are being connected with all-weather roads, electricity connections and other facilities while the houses are being made into RCC structures.

Villagers are being trained and provided with livelihood-generation projects to enhance their incomes.

Tourist inflows into many of these areas are also being encouraged in order to boost the local economy.

“The whole idea is to discourage migration of local people from those remote areas along the LAC and encourage them to stay in their villages. The local people are our eyes and ears and have often provided very timely warnings about intrusions by Chinese into our side,” said an officer of a Mountain Brigade deployed in eastern Arunachal Pradesh.

The senior staff officer in Eastern Command said that for the first time since 1954, no major army unit is stationed in Arunachal Pradesh, Nagaland, Manipur, Mizoram, Tripura and Meghalaya for CI/CT operations. Only the 73 Mountain Brigade in Assam is tasked with such operations now.

While attention is focused on Ladakh, readiness to meet the Chinese challenge in the eastern sector has been bolstered.

For the first time in more than six decades, all the four Corps under the Eastern Command--the 17 Corps (strike Corps) at Panagarh, the 33 Corps, 4 Corps and 3 Corps--are focused completely on the LAC.

“This represents a paradigm shift and has enhanced manifold our ability to not only meet and deter, but also destroy any threats from across the LAC. And it has only been possible due to the Army’s withdrawal from counter-insurgency and counter-terror operations,” said the officer.

Also Read: Explained: Why The Crisis In Ladakh Is Far From Over