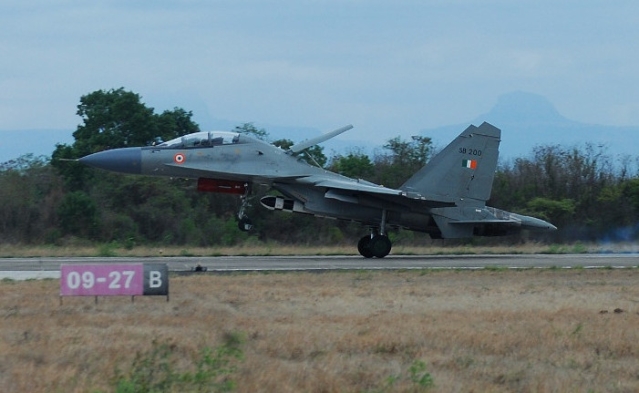 Later this week, India will test its deadliest combination of weapons – an upgraded Su-30MKI armed with nuclear-capable BrahMos-A supersonic cruise missiles – for the first time. In what was described as a “purely Make In India effort”, a modified Indian Air Force (IAF) Su-30MKI successfully flew with a BrahMos-A missile on its belly hard-point for the first time in June 2016.

This combination, which brings together one of the world’s most capable fourth generation fighter jets and a uniquely destructive cruise missile, will make the IAF the only air force in the world in possession of a supersonic cruise missile system and will be a major force multiplier for the Indian forces. Here’s how:

One, the integration of BrahMos missiles with the Su-30MKIs will allow the IAF to carry out precision strike on targets located deep inside enemy territory and destroy well-defended installations from a stand-off range.

Two, the high accuracy of the BrahMos missile will add to the effectiveness of air attack. The missile follows a predetermined trajectory, and can hit a hardened concrete target with perfect accuracy with supersonic velocity.

Three, the BrahMos-A can be fitted with a 200-kilogram conventional or 300-kilogram nuclear warhead. Therefore, it gives the IAF an additional nuclear-strike option, although it is not clear if the missiles have been assigned a nuclear role.

Four, air-launched BrahMos will not be as vulnerable to attack as the land-based systems which despite being mobile can be targeted by enemy fighter jets once spotted. Given the limited range of the BrahMos missiles (new generation of Brahmos missiles will have a 600 kilometer-plus range), land based systems are required to be stationed near the border, whereas the air-launched version mounted on Su-30MKIs can be based at locations far from enemy’s reach.

The IAF is slated to receive its first air-launched nuclear-capable BrahMos-A missiles in January 2018, BrahMos Aerospace joint venture co-director Alexander Maxichev told TASS news agency at the Dubai Airshow 2017 on 13 November. India plans to modify at least 42 Su-30MKIs of the IAF to carry the air-launched BrahMos-A, two of which have already undergone structural and software changes.

The effort to arm IAF’s upgraded MiG-29s, Rafale jets and Indian Navy’s MiG-29Ks, none of which can currently deploy a BrahMos-A, are currently underway. For this, lighter and smaller-diameter versions of the BrahMos are being developed.