From Crown Of Glory To Crown Of Thorns: Ten Banking Honchos Now Facing The NPA Heat In Modi Regime 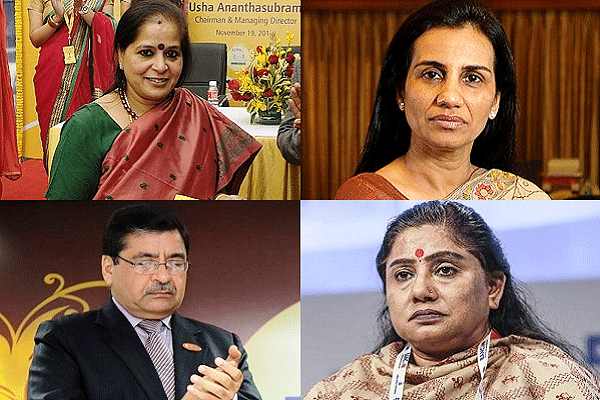 Economists have argued that the supposedly high-growth years of the Indian economy between 2004 and 2008 were fuelled by reckless lending by the banks into unprofitable ventures. Excess capacity was being created without commensurate demand leading up to the current non-performing assets’ (NPA) crisis that the economy faces.

This artificial and market-distortionary stimulus continued in the aftermath of the 2008 financial crisis and bank books continued to be overburdened with loans that had little to no hope of repayment.

Both, policymakers in the Manmohan Singh government as well as Reserve Bank of India (RBI) officials turned a blind eye to the growing NPA problem in the Indian banking system. Thus, when the Congress-led UPA II government was ousted from power in 2014, the Modi government inherited a broken banking system that had, for years, served the interests of a few politically-savvy wilful defaulters at the cost of millions of financially excluded Indians.

The government got to work and it was understood that to solve a problem, the scale of the problems needed to be identified and measured adequately. Thus, the RBI with support from the Union government, directed banks to begin recognising and provisioning for bad loans. In other words, to start writing off NPAs from their books. Bank profits, expectedly, took a hit.

To help banks recover whatever they could from the wilful defaulters, the government enacted the historic Insolvency and Bankruptcy Code of India (IBC), 2016. Though vested interests tried to thwart its implementation, Supreme Court has upheld its validity in its ‘entirety’.

It also slowly became evident that heads of a few banks had violated principles of propriety, accountability and transparency and engaged in unethical practices.

Here is the list of ten banking honchos that were put to task by enforcement agencies since the banking crisis unfolded.

He was arrested in 2014 by the Central Bureau of Investigation (CBI) for allegedly taking a bribe of Rs 50 lakhs to increase the credit limit for some companies.

He was arrested by the CBI in 2017 on the charge of sanctioning loans of over Rs 1,000 crores to Kingfisher Airlines despite its "weak financial record.”

Batra was also arrested in the Kingfisher loan default case by the CBI in 2017 for illegal banking practices.

She was dismissed from service by the government and CBI filed a chargesheet against her in 2018 in the Nirav Modi bank fraud case. Fake LoUs (Letter of Understanding) totalling Rs 14,000 crores were issued to the Nirav Modi's firm with the help of PNB exectuvies.

CBI has filed a chargesheet against him in the Niram Modi scam.

Similarly, he was alleged to be complicit in the Rs 14,000 crores Nirav Modi scandal.

The CBI has chargesheeted her, alleging that she had amassed assets worth Rs 4.89 crore and incurred an additional expenditure of Rs 1.47 crore while serving in senior positions at various banks between 2004 and 2014.

The CBI questioned him in the Nirav Modi case as ICICI Bank was the leader of a consortium of the banks that lent money of Gitanjali Group.

The CBI has booked the former ICICI Bank CEO for corruption in the sanctioning of loans worth Rs 1,875 crores between 2009 and 2011 to the Videocon group, headed by her husband, Deepak Kochhar.

He was arrested by the Pune police's Economic Offences Wing (EOW) in a case involving around Rs. 243 crores of fraudulent loans being extended by the bank to the Pune-based DSK Group.

Although all of these executives are currently out on bail, investigations against them are underway by various enforcement agencies.