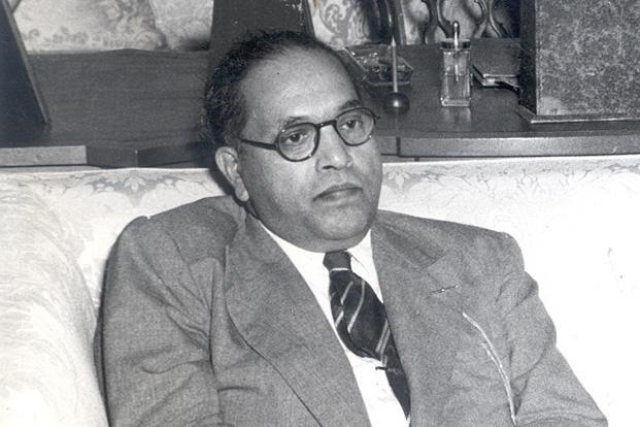 Overlooking Ambedkar’s free market views, his followers have pigeon-holed him merely as a Dalit icon to suit their own narrow political interests.

Two decades ago, India liberated itself from the shackles of socialism and a command economy and put itself on the road to a liberal economic system.

In the era of liberalization, strangely, the one obvious thing that should have happened, but did not happen, was unearthing the liberal economic ideas of great personalities like C. Rajagopalachari “Rajaji”, Dr. B.R. Ambedkar, Professor B.R Shenoy, and Professor S.Ambirajan, among others.

Since India’s independence in 1947, many of the country’s top institutions and its intelligentsia have suffered from being dominated from the Left. Perhaps this is why even after two decades of liberalization there seems to be much resistance from many who ought to support the basic idea of economic freedom in the country but don’t seem to.

Despite this, twentieth century India produced many great classical liberal economists and thinkers such as those named above who pioneered original free market economic ideas

If this comes as a surprise to you, read on.

Even self-styled “Ambedkarites” have not taken the trouble to look at his free market economic ideas. In fact, I’d argue that in pre-independent India the one economist whose ideas were global in perspective and close to the Austrian School of Economics (pre-cursor of modern libertarian economics) was none other than Ambedkar.

His ideas on economics are relevant today as ever before and in dire need of revival.

Ambedkar, before becoming a social reformer and entering politics full time, was a professional practicing economist — a little known fact.

But in post-independent India, virtually all of his insightful and powerful economic ideas and writings have been forgotten and neglected, both by Indian intellectuals in general and economic historians and Ambedkarites in particular.

A dubious argument put forth by many, especially by “mainstream” Keynesian and Marxist economists, is that Ambedkar’s highly significant contributions in the areas of social reform, political systems and constitution-making have overshadowed his contributions to economics.

This makes no sense.

Neglect of Ambedkar’s thoughts on economics almost seems deliberate and in many instances, one sees him being referred to as a strong believer of socialism, Marxism and statism which is completely fallacious.

Take Anand Teltumbde, Dalit activist and management professor, who argued in an article in Economic & Political Weekly (March 5, 2011) that “Ambedkar, who publicly professed his opposition to capitalism throughout his life, was thus wilfully distorted to be the supporter of neoliberal capitalism, which globalisation is!”

Every year the UGC selects several colleges and universities and offers them funding to conduct research on these personalities. Out of 24, Ambedkar is pigeon-holed for research on his “social thoughts”.

The real question is: why limit the inquiry to someone’s “social thoughts”?

In order to do justice to someone’s contributions to knowledge, serious  and honest research on that individual must be well-rounded and cover all of their contributions, in this case, his economic, social and political thoughts and ideas.

In India, there are a total of 29 “Centres for Ambedkar Studies”. This is the second highest, named after a major personality. Not surprisingly, Gandhi merits about 85 centres.

It is ironic that there is no department of economics and not even an economics professor, in the Dr. Babasaheb Ambedkar National Institute of Social Sciences,  in his birth place, Mhow!

So what was Ambedkar’s contribution to economics?

Unlike many of his great contemporaries, Ambedkar was professionally trained in “political economics”, as it was then known. In 1918, at the young age of 27, he became Professor of Political Economy at Sydenham College of Commerce and Economics in Bombay.

In 1915, he completed an M.A in economics with a thesis on “Ancient Indian Commerce” at Columbia University in New York. In 1916, he submitted another thesis, “National Dividend for India: A Historic and Analytical Study”, for a Ph.D. degree in Economics, and Columbia awarded him a doctorate in 1917. This thesis was later published as a book, The Evolution of Provincial Finance in British India, in London.

Further, the prolific Ambedkar produced at least three scholarly contributions to economics, in which he makes many original arguments.

These are: (1) “Administration and Finance of the East India Company” (1915); (2) “The Problem of the Rupee: Its Origin and Its Solution” (1923), and (3) “The Evolution of Provincial Finance in British India: A Study in the Provincial Decentralisation of Imperial Finance” (1925).

The second and third of these works contain many pro-market ideas which were hardly known then but later gained currency in the second half of the twentieth century. What’s more, through his writings Ambedkar pioneered original ideas like “economic and political decision making in an environment of dispersed knowledge” and “alternative monetary systems (and the) denationalized production of money”, the sort of ideas that one might have found in the writings of the great Austrian economist, Friedrich von Hayek, but which were virtually unknown in India and Britain at the time.

Ambedkar wrote extensively on finance, monetary economics, banking systems, and interstate financial relations. He had expertise on Indian currency and banking in the second half of the 19th century and the early decades of the 20th century. He was trained under great scholars like Edwin Cannan, Edwin Seligman, John Dewey, James Robinson, and James Shotwell.

A keen student of economics, Ambedkar was an advocate for private property rights, the gold standard, “free banking” or multiple competing currencies, and decentralized planning. Always a champion of individual liberty and freedom, he was a vehement critic of Maynard Keynes, and his views were much more in consonance with the great architect of libertarian thought, Hayek.

Ambedkar even aged 17, clearly understood that no one person or institution could possess all of the information and knowledge needed to plan for the whole country.

This original argument for the weaknesses inherent in a centralized economy can be found in The Evolution of Provincial Finances in British India, published in 1925, but written in 1917 where he says: “by centralisation all progress tends to be retarded, all initiative liable to be checked and the sense of responsibility of local Authorities greatly impaired” and “centralisation conflicts with what may be regarded as a cardinal principle of good government”.

Ambedkar went on to argue:

“Centralisation, unless greatly circumscribed, must lead to inefficiency… there must come a point at which the higher authority must be less competent than the tower, because it cannot by any possibility possess the requisite knowledge of all local conditions. It was therefore obvious that a Central Government for the whole of India could not be said to possess knowledge and experience of all various conditions prevailing in the different Provinces under it.”

The Problem of the Rupee was Ambedkar’s magnum opus, in which he emphasized the need for a sound monetary system for trade and its nexus with private property rights. Writing in the first chapter (1947: 1-2) he writes:

“Trade is an important apparatus in a society, based on private property and pursuit of individual gain; without it, it would be difficult for its members to distribute the specialized products of their labour…With money as the focusing-point of all human efforts, interests, desires, and ambitions, a trading society is bound to function in a regime of price, where successes and failures are results of nice calculations of price-outlay as against price-product.”

If Ambedkar were alive today, it’s evident where he would stand on the “Sen-Bhagwati debate” — firmly on the side of free markets and not redistributive, socialist welfare schemes.

The Royal Commission on Indian Currency and Finance, chaired by Hilton Young in 1924–25, was instrumental in establishing India’s central bank, the Reserve Bank of India. While defending before the Commission the idea of multiple or competing currencies issued by individual banks instead of the government’s monopoly of legal tender, Ambedkar said (1926):

If Ambedkar’s words had been heeded in the last few years, they might have helped avoid the global financial crisis.

More specifically this is as an important contribution to the discussion of currency problems in India or elsewhere for that matter. These ideas are also core beliefs of the Austrian School of Economics, exemplified by Carl Menger whose work was familiar to Ambedkar. However, Ambedkar  articulated the idea of multiple or competing currencies inspired by the works of the great liberal thinker, Gopal Krishna Gokhale, who wrote independently of the Austrians.

Contrary to what his followers claim, Ambedkar vehemently criticized Keynes and other supporters of the “gold exchange standard” and argued in favour of a modified gold standard. To quote Ambedkar:

“How can she become a gold-standard country? The obvious answer is, by introducing a gold currency. Prof. Kenyes scoffs at the view that there cannot be a gold standard without a gold currency as pure nonsense. He seems to hold that a currency and a standard of value are two different things. Surely there he is wrong. Because a society needs a medium of exchange, a standard of value, and a store of value to sustain its economic life, it is positively erroneous to argue that these three functions can be performed by different instrumentalities.”

In one of his earliest scholarly papers, from 1918, Ambedkar opined that India needed to help people migrate from agriculture to industry:

This is still relevant today and would be great advice to the government on why we need to reduce surplus non-productive employment in agriculture.

In light of all of this, it’s evident that, as an economist, Ambedkar was closer to free-market economics and no advocate of socialism or Marxism, as he is often painted by his dubious followers who would gladly erase this important facet of their icon’s legacy.

Indeed, it was Ambedkar who strongly opposed inserting the word “socialism” in the preamble of the Indian Constitution. Would he do this if he supported Marxist economics?

It’s clear that there is not a single political party in India, including the “Ambedkariate” parties, which has taken seriously the economic ideas of Ambedkar. It was Ambedkar who famously said “Educate, Agitate, Organise”. But it seems that the trend today is for all manner of people to organise movements and start agitating without bothering to educate themselves!

It’s a great pity that Ambedkar’s Dalit followers are apparently unaware of their hero’s free market — even libertarian — views on economics and individual liberty and prefer to hold him hostage to a a narrow conception — he as a Dalit leader — that suits their political ends and ideology.

Ambedkar was much greater than that.