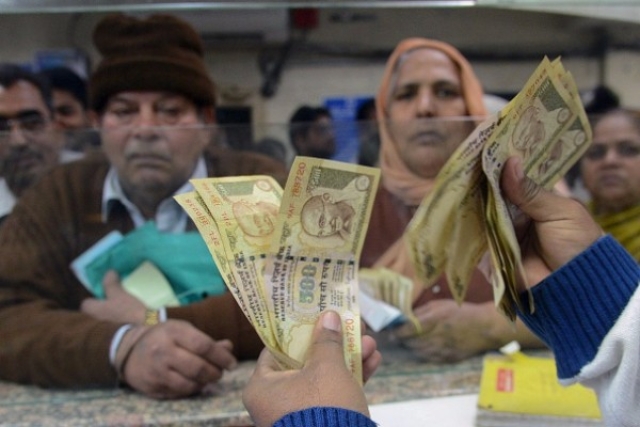 An Indian Bank teller counts out notes as citizens gather inside a bank to deposit and exchange old Rs 500 and Rs 1,000 notes. (NARINDER NANU/AFP/Getty Images)

As the gravity of the Nirav Modi scam and its impact on various banks across India sinks in, one is reminded of the Indian Bank loan scandal that broke out in 1995-96. At one point in time, media reports said the scandal had the potential to shake the then United Front government led by H D Deve Gowda. This was because leaders of the Tamil Maanila Congress (TMC), who had broken from the Congress to form the regional party in protest against P V Narasimha Rao’s decision to have an alliance with the All India Anna Dravida Munnetra Kazhagam (AIADMK), and the Dravida Munnetra Kazhagam (DMK) didn’t want the case to be pursued to its logical end.

The issue came to limelight after the 110-odd-year-old bank reported Rs 1,727 crore loss in the 1995-96 fiscal. Then, it was the biggest loss in the banking industry and the bank’s entire capital was wiped out. The Central Bureau of Investigation (CBI) initiated a probe into the scandal. But in November 1996, Deve Gowda called up the then CBI chief Joginder Singh to tell him that the then finance minister P Chidambaram was unhappy with the agency’s action against Indian Bank executive director T P Karunandan. Deve Gowda pulled up Singh for violating rules that prohibited CBI from taking action against any official above the joint secretary level.

More details started pouring in subsequently with the bank’s chairman-cum-managing director (CMD) M Gopalakrishnan seen as the nerve-centre of the whole scam. (During the mid-1990s those who watched Doordarshan news in Chennai can tell you how Gopalakrishnan events got more coverage than any politician in Tamil Nadu! People would whisper that the many at the Chennai Doordarshan Kendra were beneficiaries of Gopalakrishnan’s largesse. Indian Bank also extended loans to journalists for constructing their flats/homes near Thiruvanmiyur and some of them are yet to repay.)

Later, Reserve Bank of India (RBI) revealed that Gopalakrishnan got seven extensions during his 1988-1995 tenure as the CMD – unprecedented in banking history. In December 1994, the then prime minister P V Narasimha Rao sent a note to the Finance Ministry asking the appointments committee to let Gopalakrishnan “continue as CMD until further orders”. (Manmohan Singh was the finance minister at that point of time. )

Gopalakrishnan was very close to G K Moopanar, once a Congress stalwart in Tamil Nadu and then TMC founder. Investigations showed that Indian Bank randomly extended loans to most people connected with Moopanar-Gopalakrishnan duo. The CMD was close to P Chidambaram too. There was one clinching evidence against Moopanar – that of Bank of Thanjavur giving Rs 2 crore loan to his brother-in-law Soundaraja Moopanar to start a chemical factory near Karaikudi in 1988. Four years later, Bank of Thanjavur in which Moopanar’s brothers were directors merged with Indian Bank. Bank of Thanjavur’s Rs 50 crore loss then was transferred to the merged Indian Bank.

When he was arrested and questioned, Gopalakrishnan admitted that his links with politicians helped him sanction loans discreetly. After retirement in 1996, he joined TMC as an ordinary member. A party spokesperson then said that Gopalakrishnan had joined on his own without making any demand. In 1996, India Today reported that the CBI faced “many technical impediments” besides the government stonewalling the probe.

The CBI probe into the scam revealed blatant violations by Gopalakrishnan and his men. For example, in 1991, then Congress leader in Tiruchi L Adaikalaraj’s group got Rs 20 crore as loan with proper scrutiny of his project. The loan was ratified after it was disbursed by the bank. Former Congress minister Dhanushkodi Adithan’s wife Indira got Rs 1.5 crore loan for her firm Indian Garnet Sand without any assessment of the firm’s finances. Similarly, a member of Parliament representing TMC from Salem was extended the same courtesy for a Rs 2.5 crore loan.

More starkingly, a non-resident Indian M Varadarajulu’s firm MVR Exports got Rs 350 crore loan. Varadarajulu was the single largest beneficiary of Indian Bank’s 1988-1995 “loan mela”. Some loans were extended on Gopalakrishnan’s oral instructions, according to CBI sources then, to even shell companies.

According to PGurus, the scam’s lid was blown off since the loss exceeded Rs 1,000 crore making the then management jittery and because of old foes of Moopanar-Chidambaram in the Congress deciding to pay them back in kind. Efforts to probe the scandal by the CBI and RBI were stalled by the government of the day then.

Chidambaram allegedly tried to protect Gopalakrishnan, being in command at the Finance Ministry but he could do little when Subramanian Swamy approached the courts demanding a fair probe into the scam. Gopalakrishnan, who is now 83-years-old, has been convicted in four cases related to the scandal – the latest in January this year when he was handed three years rigorous imprisonment (RI) and Rs 1.50 lakh penalty by the special CBI court in Chennai. The first ruling came in 2009 when Gopalakrishnan, along with a couple of others, was sentenced to 14 years RI and fined Rs 70 lakh by the CBI court. MVR group officials, including Varadarajulu, were convicted in 2013.

Indian Bank has come a long way from the scandal, reporting Rs 303 crore profit in the October-December quarter of the current fiscal.