Demonetisation: Latest RBI Data Reveals That Over Rs 1.6 Lakh Crore Has Not Returned To Banks 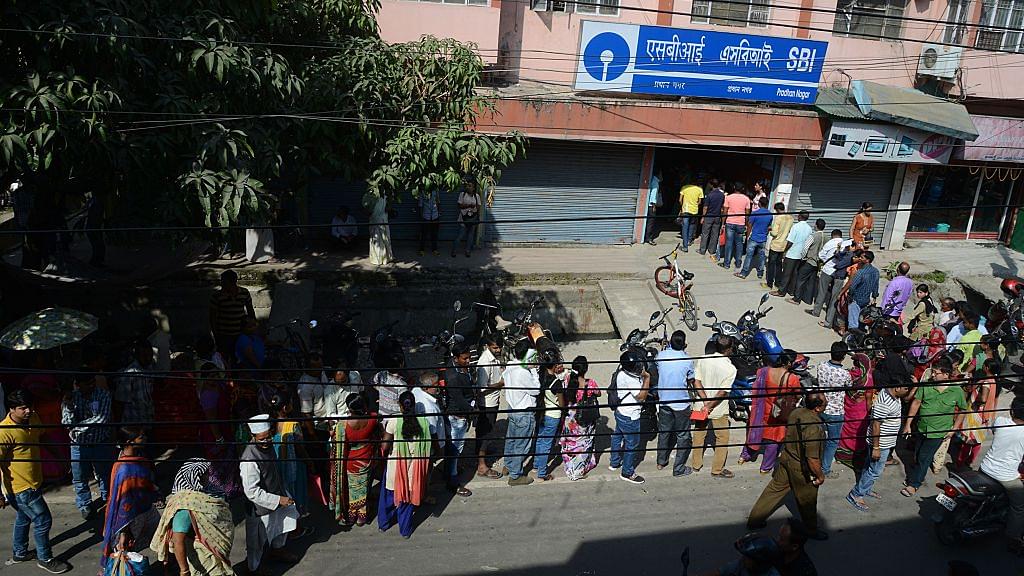 Indian customers line up next to an ATM at a bank in Siliguri. (DIPTENDU DUTTA/AFP/GettyImages)

The Reserve Bank of India (RBI) has released its weekly statistical supplement on Friday, 6 January 2017 in which currency in circulation (CIC) as on 30 December 2016 (the last day for surrendering old Rs 500 and Rs 1,000 notes in banks) has been disclosed as Rs 9.384 trillion. This is a drop of Rs 8.591 trillion from the corresponding amount of CIC of Rs 17.976 trillion as on 4 November 2016 (two working days prior to demonetisation announcement).

The drop in CIC comprises of two components: the old Rs 500 and Rs 1,000 currency notes (specified bank notes or SBNs) deposited by public into the banks and post offices, and the amount of fresh currency injected into circulation by RBI, the former reducing the CIC and the latter, increasing it. Obviously, since the SBNs deposited is in excess of fresh currency injected (why else will we all continue to face shortage at ATMs and weekly withdrawal limits still?), the total CIC has dropped sharply, by almost 50 per cent.

With the above information, if one were to estimate the amount of fresh currency injected into circulation by RBI, the amount of SBNs deposited can be easily arrived at.

The fresh currency injected into the system has only two components:

A) Lower denomination currency already available with RBI, which has since been released into circulation, and

Let us analyse both these components based on publicly available data.

A press release issued by RBI as on 19 December 2016 comes in handy to estimate both the above numbers. According to this release, RBI has injected 20.2 billion pieces of lower denomination currency (10s, 20s, 50s and 100s) afresh into the system. While RBI has not specifically mentioned the amount in value, the same can be estimated based on the mix of lower denomination currency available with RBI, disclosed in its latest annual report as of March, 2016. The composition (56 per cent in 10s, 9 per cent in 20s, 7 per cent in 50s and 28 per cent in 100s), when applied on the 20.2 billion pieces freshly injected, implies a value of Rs 0.79 trillion.

The same press release of 19 December 2016 issued by RBI informed that the central bank has so far released 2.2 billion pieces of new Rs 500 and Rs 2,000 notes (again, without specifying the value in rupees). Here again, the RTI response comes to our rescue. As per this RTI response by RBI, as on 8 November 2016, RBI did not have even a single new Rs 500 note as on the date of announcement of demonetisation (which is shocking, to say the least! Unless one gives credence to the rumour that the announcement date was advanced by several weeks after the government panicked on seeing photos of new notes circulating on Whatsapp!). RBI had also responded that it had 2.473 billion pieces of Rs 2,000 notes as on 8 November 2016. So, it is fairly reasonable to assume that the 2.2 billion pieces referred in the press release pertained predominantly to the Rs 2,000 notes. However, since new notes of Rs 500 were also available in many cities across India by 19 December, a reasonable assumption would be a ratio of 90:10 between Rs 2,000 and Rs 500 notes. (Just to clarify, a lower proportion, say 80:20, would imply a significantly higher amount of SBNs not yet deposited!). At this ratio of 90:10, the stated 2.2 billion pieces newly-introduced in circulation would imply Rs 4.07 trillion in value. (At 80:20, the value would be Rs 3.74 trillion).

The last piece of this jigsaw is the amount of new currency that RBI would have introduced between 19 December 2016 (the date of this press release) and 30 December 2016 (the date of reckoning). The total capacity of all the currency printing presses in this country is 24 billion pieces per annum or 2 billion pieces per month. Given the acute shortage of Rs 500 notes, it is almost certain that the entire capacity would have been used only for printing Rs 500 notes, and there is likely to be minimal accrual or depletion to the stock of inventory at RBI. At full capacity, the presses could produce Rs 0.34 trillion of Rs 500 notes during this 10-day period.

Amount Of SBNs Deposited And ‘Burnt’

Based on the above workings, the amount of SBNs deposited with banks and post offices as on 30 December 2016 works out to Rs 13.78 trillion. And this implies that old currency worth Rs 1.66 trillion has not yet seen the light of the day! Any instance of double counting etc is not likely to change the CIC by any meaningful amount and, by implication, the above workings as well.

Are we again going to see the revival of the debate on “is it ethical for RBI to declare this bonanza as one-time dividend”?