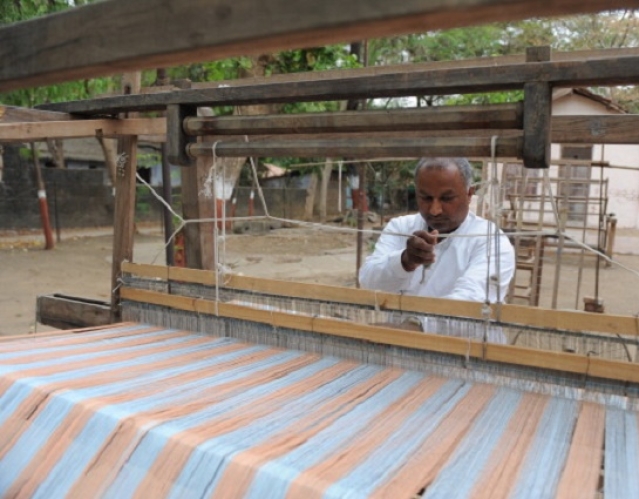 A recent report in the Times of India shows that the Khadi fabric and garments sales witnessed a 29 percent growth and crossed Rs 1,500 crore mark for the first time. Though this announcement is very exciting in its nominal terms, a recent study conducted by CPPR in 2015-16 on the Khadi sector provides quite contrasting insights on the sector. The study shows that in spite of the huge spending by the Government of India on Khadi sector, there had been a decline in the production and sales of Khadi and the employment generated by the sector in the last few decades. Moreover, the huge amount spent for the economic empowerment of the poor artisans is not reaching their hands.

At the same time, production and sales of Khadi fabrics, adjusted for inflation declined from Rs 9.19 crore and ₹ 11.58 Crore to to   ₹ 5.19 Crore and  ₹ 6.09 Crore respectively in the same period. The Comptroller and Auditor General (CIG) of India Audit report (Report No 25 of 2014) on Khadi and Village Industries Commission(KVIC) also reveals that KVIC is ineffective in utilizing the plan and non plan funds for the Khadi sector promotion, clearly indicating the wastage of public monies.

According to the regulations of the MSME, only KVIC and KVIC certified institutions are allowed to produce Khadi, creating significant entry barriers. The certification process of Khadi is imposed by the Government to protect the industry is not market friendly and does not cater to the interests and tastes of the customers.

Many weaving units, however, emerged only for getting KVIC rebates and other benefits but have not produced any Khadi product. At the same time, this has also resulted in many piracy problems associated with Khadi industry like producing spurious products in the name of Khadi through unofficial channels.

Khadi fabrics are available mostly in KVIC certified stores only, restricting the availability of Khadi products to the consumers. In addition to this, in the Khadi retail outlets, the working times are the government office timings in India, from 10 am to 5 pm .When the whole marketing is going e-commece line 24x7 these days, the stereotypes in Khadi sector are not doing anything good for the marketing of Khadi products. The marketing of Khadi is mainly done by Khadi institutions.

Over protection of the sector has resulted in poor branding and marketing plans (as not many big players are in the field) and the traditionalists still resort to the conventional print advertisements or banners and rebate schemes for the marketing of Khadi products of the old days. The above mentioned restricted practices have resulted in the decline in the production and sales of Khadi fabrics. It is mainly due to over bearance of KVIC in the sector.

The primary objective of KVIC, which is employment generation in the rural economy through the promotion of Khadi is not achieved in India. The employment in Khadi sector declined from in the period 1960-61  to 2014-15, from 1.7 crores to 0.11 crore, with a significant negative growth rate of 5.2 per cent.

The Khadi artisans, mainly women spinners and weavers, contracted by the Khadi institutions are piece rate workers who get pay rate for the output made. Khadi institutions decide the wages, according to the minimum wage rate fixed by KVIC.  In addition to the wages, the MSME has implemented different measures for the economic empowerment of the poor artisans through KVIC like Market Development Assistance Schemes and different Welfare Schemes.

The women spinners and weavers, however, receive only the guaranteed minimum wage in hand everyday of the range ₹ 100 to ₹ 125 only, which is very low compared to those working in sectors like match industry(₹ 336 per day). The wage given is not sufficient for maintaining their livelihood, as reported by many workers, in spite of the high physical work involved.

There is a mandatory requirement from MSME to give the artisans’ wages only through banks or post offices while in spite of this, in the majority of the Khadi institutions, the wages are given as cash. Hence, there is no certainty on when the artisans are  getting the other allowances. For Khadi cloth worth ₹ 100, 38.75 per cent goes to the wages for the poor artisans, as shown by the Khadi cost chart 2015 of Kerala. It, however, is split into spinning and weaving wages. Considering the spinning and weaving wages separately, spinning and weaving are only 15 per cent each of the total cost. At the same time, the private wage standards of weavers who work for the textile entrepreneurs in the handloom industry in many states as shown by studies are 25 per cent.

Khadi sector is an over-regulated one in India, where the entire production process, sales, distribution, and marketing is majorly regulated by the government through KVIC, formed in 1957, under the administrative control of MSME. The restrictive practices adopted by the government implemented through KVIC, have resulted in making the Khadi industry ineffective, inefficient along with failing to deliver economic empowerment to the poor artisans working in the sector.

The entry barriers in the market need to be removed and the fabric is made available to private retail stores, thereby the public is given a wider number of choices to opt. It is important to add here, that the opening up of Khadi retailing to private players such as Raymond and Fabindia are good initiatives in this regard. However, at present, both require the prior permission of KVIC to retail khadi.  This, is counterproductive and should be done away with. The new initiative to tie up with paytm for online selling of products is also appreciable here.

Similarly, marketing techniques are also needed for the promotion of Khadi rather than relying on outdated techniques. Here, the spinners and weavers should be allowed to work with private textile designers without the approval of KVIC. This will free up the labour market and will prevent leakages to middle men. The increase in the number of purveyors of Khadi will also prevent price monopolisation, and will increase the supply available. This will also prevent piracy problems associated with the Khadi industry such as the production of fake products being sold as Khadi through unofficial channels.