GRAM 2016: Time For Indian Agriculture To Embrace The ‘Brown Revolution’ 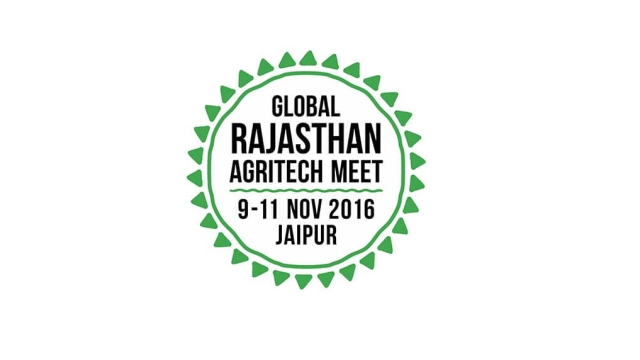 Rajasthan Chief Minister Vasundhara Raje kicked off the three-day agri-tech meet, GRAM 2016, in Jaipur yesterday (9 November). She promised to transform the state’s agricultural landscape by actively promoting global best practices and invited the corporates to join hands with farmers to modernise agriculture in the state.

Two sessions were scheduled for the first day; on sustainable measures towards achieving the goal of doubling farm incomes and discussion on the way forward in the Rajasthan-Israel partnership.

Gulati told the audience that India’s household incomes grew by a meagre 3.5 per cent between 2002-03 to 2012-13. He noted that during the same period, Rajasthan did much better and its farmers’ household incomes grew at a decent pace of 7.5 per cent. However, to double the farm incomes nationally in the next six years, the required growth is 12 per cent per annum which is an uphill task.

But despite this scepticism, Gulati raised important questions: Where will the increased income come from? How do we get there?

And the idea is not to just grow but also to make sure that the yields are sustainable over long term and equitable. Gulati pointed out to some side-effects of the green revolution. While this greatly increased prosperity in the regions of Haryana and Punjab, these states have seen their water table depleting. Hence, simply increasing yields is not sufficient, he said.

Gulati contended that India needs to move from green to gene to brown revolution in agriculture. What is ‘brown’ revolution? It relates to focusing greatly on the soil quality. We need to figure out exactly the kind of crops the soil is ideal for, the amount of seeds, fertilisers, irrigation needs, moisture level etc. The world is increasingly adopting technologies that greatly rely on soil quality.

Everything a soil needs can be figured out by advanced technology, and machines can assess whatever a crop needs at whatever time and the required quantity. This obviates the need for human intervention. A person can focus on tracking the work of the machine sitting at his/her home as all the data can be uploaded on the cloud.

In states likes Iowa and Illinois, the results of such experiments have been good, Gulati said. He said that in these states, in maize cultivation for instance, the yields are as high as 11 tonnes per hectare and this has been achieved with lesser irrigation, seed and fertilisers.

Can this be replicated in India? To answer this, Gulati called his fellow panelists from Israel to speak about their experiments here in collaboration with Rajasthan. Israel’s geography somewhat resembles that of Rajasthan’s as both states are semi-arid regions.

Dr Bergvinson, director general, International Crops Research Institute for the Semi-Arid Tropics (ICRISAT) was the first to put his views across on the matter. He rightly emphasised that instead of ‘per drop more crop’ the focus should shift to extracting more income. He listed the various challenges for Indian agriculture including the lack of diversified food system. Like Gulati, Bergivinson also batted for leveraging the power of cloud computing by adopting the method of ‘precision farming’. Underscoring the need for this shift, he said that due to climate change, uncertainties are increasing and this has made farming more unpredictable.

He told the audience about the experiment on precision farming carried out in Andhra Pradesh where those who used the technology saw their yields increase 22 per cent and those who didn’t, fall by 30 per cent. To make the shift towards more technology-based farming, he said that private public producer partnership is needed along with concerted efforts at the state level.

Martien Van Nieuwkoops of the World Bank said that agriculture is an important sector which can do wonders for the bank’s dream of eradicating poverty and increasing shared prosperity as the sector is one which can have a multiplier effect. But where will the agriculture growth come from?

He mentioned three sources: 1) Yield gaps: He said that this gap, which stands at about 50 per cent in India, needs to be closed. 2) He said that farmers need to shift from cereals to more economic crops or into dairy, fruits and vegetables. The current incentives are stacked in favour of cereal crops (high MSPs, favourable environment) but farmers must move to high value crops and diversification in farming is needed. 3) He also talked about post-harvest value addition, which includes steps like processing, grading, polishing etc. To underscore the importance of these steps, he informed that for every rupee of production, post-harvest value addition in India is also Rs 1. While the same in Europe and America is Rs 8/10 for every rupee. That means, there is a lot of potential for growth.

Yuval Fuchs, Deputy head of Israel’s MASHAV agency, said that poverty reduction remains a global goal, and not just India’s. He noted that 26 per cent of world poorest people live in India. However, he said that good news is that one of the largest number of poor have been lifted out of poverty in India.

Dan Alluf, a MASHAV counsellor, spoke of his experience of three excellence centres that MASHAV has been operating in cooperation with the Rajasthan government. He told that about 70 per cent of the water that Israel uses for agriculture is actually recycled water, which it is looking to increase to 90 per cent in future. He said that MASHAV understands that though conditions in India are quite different from Israel, the expertise they are bringing in can be successful, with the implementation being tailor made for India.

Dan spoke about three segments of value chain that MASHAV is focusing on at its excellence centres. These include: 1) Nursery management. Nurseries are high-tech and they provide high-quality seedlings to farmers which also generate income for the centres, making them self-reliant. 2) Cultivation and canopy management where the idea is to encourage intensification which leads to more crops, better pest control and in turn better incomes. 3) Better irrigation and fertigation.

Yuval and Dan also spoke during the second session of the day which centred around enchancing the Rajasthan-Israel partnership, where the Rajasthan Agriculture Minister Prabhu Lal Saini was also present. Saini thanked Yuval and Dan for being great friends of India and for Israel’s support. He then suggested that Israel also consider supporting Rajasthan farmers in productivity enhancement, improving shelf life of harvested crops, quality, shape and size improvement and increasing the nutritional value of food crops. He also called for cooperation in tackling pests diseases in crops such as Nimotode, YUM, and white fly problem.

In the first session, MukulVarshney, vice president of John Deere India, spoke on the increasing challenge of labour shortage which in turn has made it more expensive. Here comes the role of machines. He said that his company, a university, seed and fertiliser specialists formed a consortium and went to farmers and understood their problems, then convinced the government to frame favourable policies to help farmers. He said that they advised farmers how to grow crops, which machines to use, even which tractor of how much horsepower may be the right fit for them, etc. pneumatic machines helped farmers a lot. Every seed planted using the machine germinated with proper row spacing. The experiment conducted in Punjab for cotton crop resulted in increased yields anywhere between 35 to 65 per cent. Introduction of these machines for sowing and picking cotton obviated the need for labour. He informed that they are looking to scale the pilot projects in future.

Since farmers in India are small and marginal with little capital to spend on buying technology and equipment, he said, that the Rajasthan government has launched Custom Hiring Centres (CHCs). Through these centres, farmers can rent out farm equipment needed. They don’t need to spend money on buying these. By this, government is doing UBERISATION of the farm equipment.

Rajasthan plans to open over 2,600 hiring centres at the panchayat samiti level in the next three years to enable the state's farmers to rent farming equipment, Chief Minister Raje had announced earlier during her speech.

Balraj Singh, vice-chancellor of Jodhpur Agricultural University, who was the last speaker of the first session stressed on improving soil health, enhancing organic matter, fertility, rainwater harvesting and making the judicious use of available water. He told that the reason why Rajasthan doesn’t see many suicides is because agriculture in the state is closely linked to animal husbandry, but he said that state needs to focus more on improving local breeds. He also called for promoting hybrid seed production and GI filling for crops like cumins, nagorimethi, gum, shahpuratenda etc, which Rajasthan is a pioneer in.

During the second session on the Rajasthan-Israel partnership, Nipun Sabrwal, head of operations at Top Greenhouses Ltd, was the last to speak. He focussed on adopting the best practices in the way we currently do agriculture. Instead of talking about vertical farming etc, he said Indian farmers first need to focus on doing horizontal farming right.

On the first day of the GRAM 2016, Yoga guru Baba Ramdev also addressed the farmers and announced setting up of a mega food park in the state and sought the support of the state government to achieve this.

Chief Guest and Rajasthan Governor Kalyan Singh, Union Minister of State ParshottamRupala, Rajasthan's Agriculture Minister Prabhu Lal Saini and Israel's ambassador to India, Daniel Carmon, spoke at the event, which was attended by hundreds of farmers from the state along with corporates, experts and stakeholders.