How India Is Responding To Malaysia’s Reckless, Pro-Pakistan Remarks On The Kashmir Issue At UN 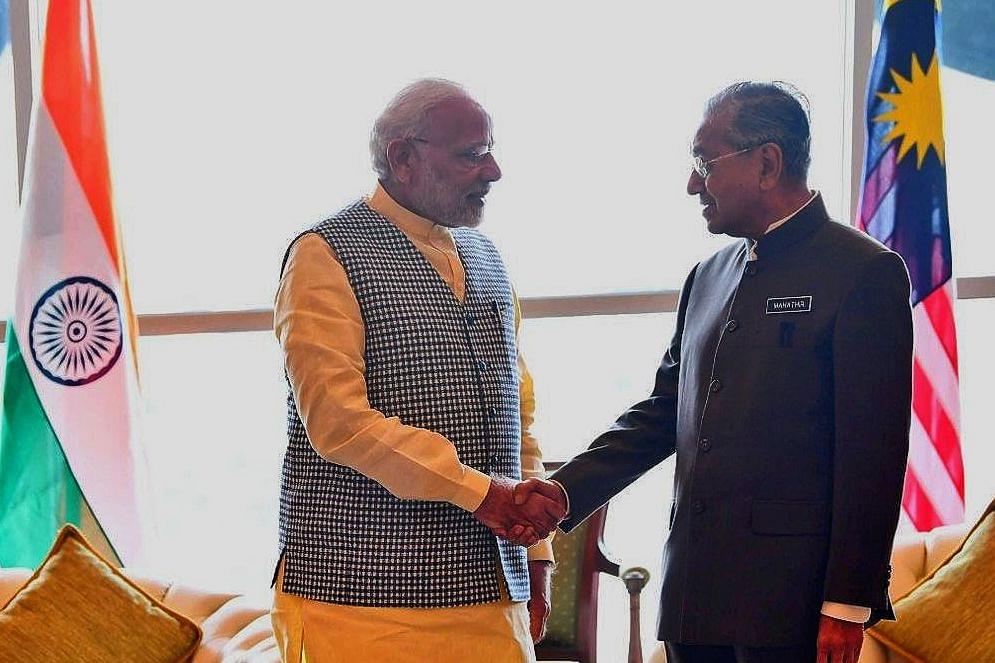 On 4 October this year, the Ministry of External Affairs came out with a strong statement against Malaysia and Turkey for their comments against India at the United Nations General Assembly on the Kashmir issue.

The ministry spokesman Raveesh Kumar was reacting to both countries criticising New Delhi over the abrogation of Article 370 in Jammu and Kashmir, ending the special status to the border state.

Kumar had two messages for both the nations. One, they should obtain a clear understanding of the situation. Two, the Malaysian government should bear in mind its friendly relations with India and desist from making such statements.

Probably, the Food Ministry has followed it up by proposing to raise the integrated goods and services taxes (IGST) to 12 per cent on imports of refined palm oil.

The External Affairs Ministry’s statement has hit the Malaysian palm oil market badly as crude palm prices have dropped to the lowest since 3 October to $518 a tonne.

In particular, India’s statement reminding Malaysia of the friendly ties between both countries has affected the palm oil market badly.

Some palm oil importers and refiners in India have taken this as a signal that the Narendra Modi government could further retaliate with trade measures, probably leading to a mini-trade war.

These importers and refiners have decided to stop signing any new purchase contract with Malaysian sellers from 1 November.

According to Solvent Extractors Association of India, importers had cut down purchases from Kuala Lumpur in September itself when Malaysia criticised India on the Kashmir issue. Crude palm oil prices had ruled at $551 a tonne then.

In September, palm oil purchases from Malaysia were down by over 30 per cent. A safeguard duty of 5 per cent on Malaysian refined palm oil from 4 September could have helped cut imports.

The development is of concern to Malaysia since India buys nearly 4 million tonnes (mt) from Kuala Lumpur of the nearly 9 mt of palm group of oils imports annually.

In contrast, China and Pakistan together buy 2.4 mt only. Palm oil exports to India made up 15 per cent of Malaysia’s total exports, valued at $1.65 billion, last year.

An industry insider told Swarajya that the move to not sign any new contract with Malaysian sellers was more of a precaution, though they see signs of India acting tough against the Mahathir Mohamad government.

“They are in the business where they don’t want to be caught on the wrong foot if India decides to act tough. It is natural for them to look for other sources like Indonesia to buy palm oil,” the insider said.

He, however, said the Indian government had not even given any informal instruction on palm oil purchases to them.

The views of importers and refiners could perhaps be that Malaysia has tested India’s patience too much. Relations between both nations haven’t been good ever since Mahathir assumed power.

When asked about Indian importers and refiners not buying palm oil from his country, the Malaysian Prime Minister shot back saying India, too, exported goods to Kuala Lumpur.

But rushing to salvage the situation on Tuesday, Teresa Kok, Malaysian minister dealing with palm oil, said her country was planning to buy more raw sugar and buffalo meat from India.

She admitted that she was aware of the issues threatening trade between both nations. In an article, Malaysia Chronicle said Kok’s gesture would not probably work as the Indian Prime Minister is seen as more "defiant and stubborn".

The industry insider wondered: “Even Islamic countries like Saudi Arabia and United Arab Emirates have supported India on the Kashmir issue. Why should not Malaysia look at them and draw lessons?”

In the hindsight, the External Affairs Ministry’s statement could have come after the Modi government felt that Kuala Lumpur has repeatedly been snubbing India for the last couple of years.

Before the current imbroglio, the Malaysian government had refused to repatriate Islamic hardliner Zakir Naik, who has been accused of promoting terrorism and hatred in India.

Kuala Lumpur is also not helping India to get hold of Malaysian businessman T Ananda Krishnan for investigations into the controversial Aircel-Maxis deal. This has resulted in the case dragging on for years.

Mahathir is also seen as being more friendly with the Congress and its president Sonia Gandhi. During the Atal Bihari Vajpayee regime, he had refused India’s request to get the main accused in the Bofors scandal Ottavio Quattrochi extradited to New Delhi from Malaysia, where he was stationed then.

Much to the chagrin of Malaysia, its neighbour Indonesia is set to gain from this stand-off. Already, its share of Indian palm oil imports is rising.

Jakarta has also come forward to buy more raw sugar from India, switching over from its Thailand and Australian sources, if New Delhi cuts import duty on palm oil.

Duty on Indonesia palm oil imports is five percentage points higher than Malaysian oil, and Jakarta is trying its best to wrest control of the situation on the levy front.

India is inclined favourably to this proposal since it is saddled with sugar stocks which are affecting the functioning of the sugar industry. New Delhi can also offer wheat to Indonesia.

In the late 1990s, Indonesia had proposed barter trade with India, offering to buy pharmaceuticals, sugar and other products in return for palm oil and timber.

At that time, the government in Indonesia was seen as not reliable and India ran into problems trying to convince Jakarta to open an escrow account in Singapore where the proceeds of the trade could be deposited.

The current Indonesian dispensation is far more reliable than the Suhartos and therefore, there could be even possibilities for barter trade.

For now, Malaysia has bitten more than what it can chew. Probably, Mahathir has taken things too far that India has been forced to act.

Kuala Lumpur might get a chance to assuage India when Modi travels to Bangkok next month for the summit of leaders of Regional Comprehensive Economic Partnership Bloc on 4 November.

Malaysia has to act as Mahathir and his government have come under flak for their anti-India stance that will likely affect oil palm growers and industry soon.

It has even resulted in one critic remarking: “Mahathir has to have palm oil for breakfast, lunch, and dinner the way he is handling relations with India.”

An agricultural trade expert says that the best way for India to retaliate against such tactics of Malaysia and Turkey would be to raise the duty on their products that are imported here to "very high levels".

India also imports natural rubber from Malaysia. It imports marble, products of automotive and textile industry, copper and copper ore, iron, steel, gold, coal, chrome, poppy and cumin seeds from Turkey, an ally of Pakistan which had raised the Kashmir issue at the UN last month.

It will make such imports unviable while breaking the back of those sectors in those two countries.